Solar thermal technologies are designed to convert the incident solar radiation into usable heat. The process of solar heat conversion implies using energy collectors - the specially designed mirrors, lenses, heat exchangers, which would concentrate the radiant energy from the sun and transfer it to a carrier fluid. The fluid passes through the sunlight collector and becomes very hot. Typical heat carrier fluids are water/steam, oil, or molten salt. Then the fluid is transferred to the heat engine, which converts the heat to electricity.

Please watch the following video, which provides an illustration of this technology.

Ok. Take the natural heat from the sun. Reflect it against a mirror. Focus all of that heat on one area. Send it through a power system. And you've got a renewable way of making electricity. It's called concentrating solar power or CSP. Now, there are many types of CSP technologies: towers, dishes, linear mirrors, and troughs. Ok, have a look at this parabolic trough system. Parabolic troughs are large mirrors shaped like a giant U. These troughs are connected together in long lines and will track the sun throughout the day. When the sun's heat is reflected off the mirror, the curved shape sends most of that reflected heat onto a receiver. The receiver tube is filled with the fluid, and it could be oil, molten salt, something that holds the heat well. Basically, this super hot liquid heats water in this thing called a heat exchanger. And the water turns to steam. Now, the steam is sent off to a turbine and, from there, it's business as usual inside a power plant. A steam turbine spins a generator and the generator makes electricity. Once the fluid transfers its heat, it's recycled and used over and over. And the steam is also cooled, condensed, and recycled again and again. One big advantage of these trough systems is that the heated fluid can be stored and used later to keep making electricity when the sun isn't shining. Sunny skies and hot temperatures make the southwest U.S. an ideal place for these kinds of power plants. Many concentrated solar power plants could be built within the next several years. And a single plant can generate 250 megawatts or more, which is enough to power about 90,000 homes. That's a lot of electricity to meet America's power needs.

There are several different kinds of solar collectors, which are described below. These collectors are only functional with the direct beam sunlight and would also benefit from sun tracking - the technology that keeps the reflectors at an optimal angle to the sun.

Flat plate collector is the simplest technology of this kind, which is typically used for reaching temperatures usually no more than 100 degrees above ambient. 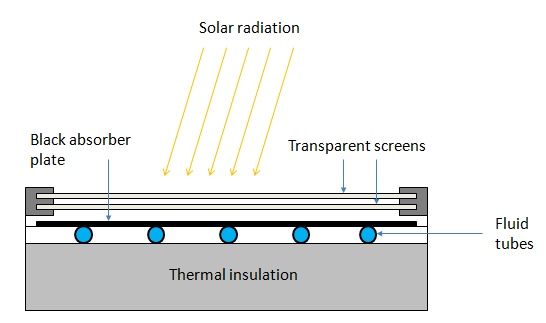 Figure 8.4. Schematic of a flat plate solar collector. The solar radiation is absorbed by the black plate and transfers heat to the fluid in the tubes. The thermal insulation prevents heat loss during fluid transfer; the screens reduce the heat loss due to convection and radiation to the atmosphere.
Credit: Mark Fedkin, modified after Duffie and Beckman, 2013

The above collectors are combined to a bigger energy conversion system. The larger scale solar thermal systems have higher efficiency than small systems.

The utility scale solar thermal systems include the following designs:

Please refer to the following reading to learn more details about the solar thermal technologies.

This article explains the fundamentals of CSP well, but it already became obsolete in terms of technology commercialization. For example, it mentions that there are no commercial solar tower plants, but actually there are now. Here, I include the list of operating Solar Thermal Power Stations available on Wikipedia page, which indicates the capacity of the plants, their location, and technology used.