1.4 Solar: the Response to Energy Constraints

(Electronic course reserves, or "e-Reserves," are articles and book chapters that are available online through the University Libraries. Access this lesson's reading by going to Library Resources in Canvas and selecting E-Reserves for EME 810)

These two readings will provide our introductory perspective on solar energy in society. I want you to think about the impact of perception in society. Some of the "constraints" in society are real, physical limits to fuel access, while others are much more subtle--but both have a similar response to induce people to adopt alternative energy strategies.

We can observe that popular perception of solar energy is strongly influenced by access to inexpensive fuels. In periods when fuels were effectively accessible, inexpensive, and unconstrained, a light-induced energy transfer (for sensible or latent heat change or for electricity generation) is usually perceived as diffuse and insufficient for performing work. However, for periods in history where fuels have become constrained (e.g., inaccessible due to high cost or high risk), innovation has turned to solar technology solutions. In such cases, the use of light-induced energy transfer is perceived as ubiquitous, and ample for performing work.

Evidence of such fuel constraints is observed as far back as the fifth century BC. During this period, the Greeks faced severe shortages of wood fuel. Archeological remains demonstrate that home designs evolved such that all houses could draw maximal utility from the Sun's warmth in winter months. It is interesting that famous Greek individuals commented on this solar design of homes. Aristotle has commented that home builders would shelter the north side of a home to keep out the cold winter winds. Socrates also lived in a home heated by the sun, and observed, "In houses that look toward the south, the sun penetrates the portico in winter" keeping the space warm (Note: a portico is just an older term for a porch). The Greek playwright Aeschylus further noted that only primitive cultures "lacked knowledge of houses turned to face the winter sun, dwelling beneath the ground like swarming ants in sunless caves." How primitive have we been these years without solar designed homes?

The Sun as a large stock for Renewable Energy Resources

A renewable resource has a rate of withdrawal (a flow) from the stock that does not exceed the rate of resource replenishment.

The sun provides energy in the form of radiation. Solar radiation is the most important natural energy resource available to us because it drives all environmental processes acting at the earth's surface. It drives the earth's rain cycle, which powers modern hydroelectric generators, and large-scale atmospheric circulations which provide the winds that have powered windmills for centuries. The sun doesn't warm the air, because the sky is largely transparent. The sun warms the ground which then warms the air. We will show how solar energy conversion devices often take advantage of the solar-thermal connection. In fact, we can often take advantage of air masses contained by walls, trees, or hills to trap and store thermal energy from the sun.

Solar energy technologies convert solar irradiance (sunlight) into forms of energy found useful to society. Historical and current developments in solar technology often coincide with specific economic or fuel constraints. As we observe from our reading assignment, technologies using solar energy conversion have been developing for a long time. Solar and wind power are among the options providing a low or non-CO2 associated energy source for electricity production. Solar energy is also a natural part of heat production in buildings or solar thermal plants. This section will review the value of solar energy from a historical context while also discussing the origins of using solar energy and the present-day development of the solar energy industry.

Below is a link to a video of the Ryoan-ji Zen temple in Japan. Look to the left of the marker at the white field just to the south of the brown roof (you will need to zoom in a few times first). This is the famous rock garden of the temple. The white field reflects light into the adjoining room to the north, and the walls surrounding the field keeps cool air inside the area. As a side note, the icon you see on the building is a map symbol for a Buddhist temple.

All right. So, what you're looking at here is a map view in Japan of a Buddhist temple called Ryoanji. It's just outside of Kyoto. And what we want to really focus on here is that this is an example of using the solar resource in a way that is old actually, but very traditional and has a really high value to a group of people. So, this is actually a temple.

And if I go in here, I should be able to show you that the—nope, I cannot.

There we go. I should be able to show you that in this map, we've got here a direction that is South. So, we're in the Northern Hemisphere. This the South. That means that this whole white space is a great area for reflecting the sun's light. And it will actually reflect the sun's light into the space just to the North. That space is actually going to be an area for working, writing, copying down what we would call sutras.

And it's very interesting because you have a white surface that is directing visible light into that space. And in doing so, you're actually avoiding using fuel to provide the lighting. That actually improves air quality. And you are avoiding the cost of that fuel in the process of doing this.

Now, if we look at the image of Ryoanji here, here's that rock garden. So, close up, you're starting to see something that you recognize, at least from popular culture, which are these calming Zen rock gardens.

The interesting thing here is that the rock garden itself is very functional. Again, it is going to be bouncing light into the space where people are working so they get much better light. In addition, think about it. White objects do not absorb light. So, by the very nature, they're reflecting light. So, you have an area that is not going to be warmed up during the day. And in fact, this is a very bright area. And it's going to remain somewhat cool. You're going to create a microclimate of cool air.

And then you have walls. And the walls are there to contain that cool, stored air. If the walls were not there, the air would just sink and flow away from the cool area. So, you're containing and storing this cool thermal energy. That, in addition, is connected to the space that we're seeing right in here. It's connected to this space. There are open doors through here, so you got cool air coming in. And you're seeing that this is one way to use solar energy for some very high-functional use.

And if we go again back to the Zen rock garden-- this is the same garden. You notice that there are rake imprints. And there's this classic idea of Zen monks raking this in a meditative process. We even sell small sandboxes with little miniature rocks and rakes to simulate a rock garden. But the actual value of this rock garden is very functional.

And so, when you rake those rocks, what you're actually doing is removing leaves. You're removing any growing moss or lichens on those rocks. You're maintaining the brilliance of those rocks as a good reflector. And so the process of raking is actually again, functional to maintaining your solar reflection device, which you're seeing here at Ryoanji.

If solar energy is this important, and the Greeks in the fifth century B.C already recognized this, you may ask why solar energy applications are not more prevalent than they are at the moment? While there is no simple answer to this, there are still many obstacles that lie in the way of its widespread adoption. The future of solar power development will depend on how we deal with constraints such as scientific and technological problems, marketing and financial limitations, and political actions and agreements that favor other energy sources.

Horace de Saussure was a Swiss naturalist of note to the history of solar development in the 18th century. He began to explore the role of a glass cover on a confined space like a box or a room. In the 1760s, de Saussure observed the following: "It is a known fact and a fact that has probably been known for a long time, that a room, a carriage, or any other place is hotter when the rays of the sun pass through glass." To find out how effectively a glass cover works to trap solar gains, de Saussure constructed a large flat pine box that was insulated inside, with a glass cover on top. Inside the box, he placed smaller boxes. When the flat cavity-cover absorber was exposed to the sun (no concentration), the internal box heated to 109 °C (228 °F), which is 9 degrees higher than the boiling point of water.

Cross-section of Langley's hot box (solar thermal box with two glass covers and a thermometer on the inside), which was similar to de Saussure's later models. A thermometer penetrating the walls at the right was used to measure the air temperature inside the inner box.

Functionally, the clear glass allows shortwave irradiance to transmit through and be absorbed by the dark interior of the box. In addition, the glass cover prevents the warm air from escaping. This is a classic flat plate cover-absorber system. The hot box that de Saussure began with later became a prototype for flat plate solar hot water panels, providing hot water to millions since 1892. The hot box also led to the development of modern solar cookers. For more information on solar thermal design, visit the following links: 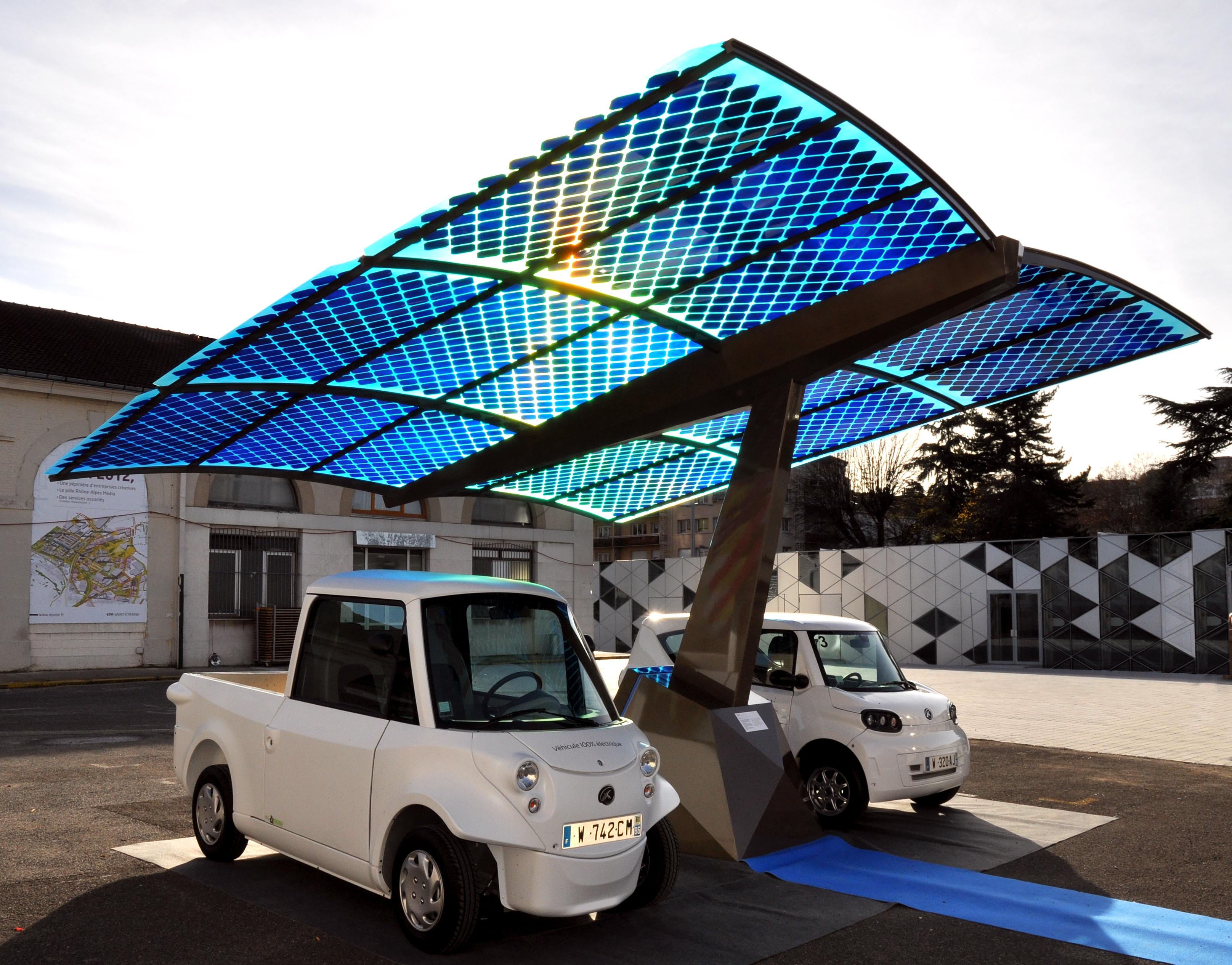 While photovoltaic materials were explored in the 1860s, tied to research in transatlantic telegraph cables (using selenium; by electrician Willoughby Smith), they did not emerge into the larger market until nearly 100 years later. Photovoltaics using silicon material were introduced to the commercial world during the early 1950s by three lead scientists at Bell Laboratories: Calvin Fuller (a chemist), Gerald Pearson (a physicist and materials experimentalist), and Darryl Chapin (a device engineer). The development of a silicon-based PV cell led to applications in space and telecommunications first, followed by applications for the petroleum industry (for anti-corrosion in wells).

PV has proved itself as a standard technology for decades. All of today's satellite communications are powered by photovoltaics, starting with the Vanguard 1 (which had no "off" switch, and so continued to transmit long after it needed to). So, be thankful, we would not even have a modern society without the advent of PV!

For more information on photovoltaics: check out the following sources:

Constraints have included wood shortages in Greece and Rome in early centuries BCE, shortages of trees and fuel in the Chaco civilizations of the Anasazi peoples of North America, coal reserve constraints in 19th century France, and fuel access constraints in rural California before the 1920s. We have recently (the past decades) entered into a new period of constrained fuel consumption due to climate forcing effects from anthropogenic greenhouse gases (associated with fuel combustion, agriculture, and high energy demand), as well as increased risk in supply chains for fuels (the quest for energy independence).

‹ 1.3 Discussion Activity up 1.5 What is a Solar Energy Conversion System? ›
EME 810: Solar Resource Assessment and Economics