So far, we have learned about a variety of factors that can degrade GPS performance as well as some common sources of GPS errors. As you might have guessed based on the purpose of the control segment of GPS and our ability to predict some of these errors, a number of techniques exist to correct errors and increase the accuracy and reliability of GPS measurements.

The locations of two GPS receivers - one stationary, one mobile - are illustrated in Figure 5.9 below. The stationary receiver (or "base station") continuously records its fixed position over a control point, which has a known location that has been measured with high accuracy. The difference between the base station's actual location and its calculated location is a measure of the positioning error affecting that receiver at that location at each given moment. In this example, the base station is located about 25 kilometers from the mobile receiver (or "rover"). The operator of the mobile receiver moves from place to place. The operator might be recording addresses for an E-911 database, or trees damaged by gypsy moth infestations, or streetlights maintained by a public works department. 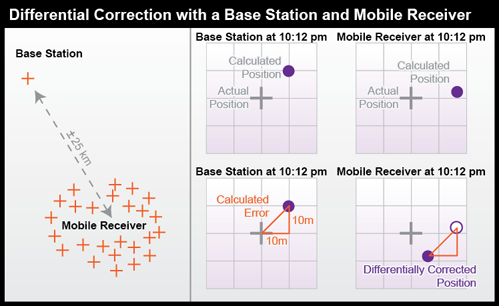 Figure 5.9: A GPS base station is fixed over a control point, while about 25 km away, a mobile GPS receiver is used to measure a series of positions. Error correction calculated at the base station is applied to the position calculated by the mobile receiver.
Credit: Department of Geography, The Pennsylvania State University. Adapted from David DiBiase’s original text (1997).

For differential correction to work, fixes recorded by the mobile receiver must be synchronized with fixes recorded by the base station (or stations). You can provide your own base station, or use correction signals produced from reference stations maintained by the U.S. Federal Aviation Administration, the U.S. Coast Guard, or other public agencies or private subscription services. Given the necessary equipment and available signals, synchronization can take place immediately ("real-time") or after the fact ("post-processing"). First let's consider real-time differential.

WAAS-enabled receivers are an inexpensive example of real-time differential correction. "WAAS" stands for Wide Area Augmentation System, a collection of about 25 base stations set up to improve GPS positioning at U.S. airport runways to the point that GPS can be used to help land airplanes (U.S. Federal Aviation Administration, 2007c). WAAS base stations transmit their measurements to a master station, where corrections are calculated and then uplinked to two geosynchronous satellites (19 are planned). The WAAS satellite then broadcasts differentially-corrected signals at the same frequency as GPS signals. WAAS signals compensate for positioning errors measured at WAAS base stations, as well as clock error corrections and regional estimates of upper-atmosphere errors (Yeazel, 2003). The WAAS network was designed to provide approximately 7-meter accuracy uniformly throughout its U.S. service area when WAAS-enabled receivers are used.

DGPS: The U.S. Coast Guard has developed a similar system, called the Differential Global Positioning Service. The DGPS network includes some 80 broadcast sites, each of which includes a survey-grade base station and a "radio beacon" transmitter that broadcasts correction signals at 285-325 kHz (just below the AM radio band). DGPS-capable GPS receivers include a connection to a radio receiver that can tune into one or more selected "beacons." Designed for navigation at sea near U.S. coasts, DGPS provides accuracies no worse than 10 meters.

Kinematic Positioning: Survey-grade real-time differential correction can be achieved using a technique called real-time kinematic (RTK) GPS. RTK uses carrier-phase tracking of GPS signals measured by a reference and a remote receiver to generate accuracies of 1 part in 100,000 to 1 part in 750,000 (in practice, this means within centimeters) with relatively brief observations of only one to two minutes each.

For applications that require accuracies of 1 part in 1,000,000 or higher, including control surveys and measurements of movements of the Earth's tectonic plates, static positioning is required (Van Sickle, 2001). In static GPS positioning, two or more receivers measure their positions from fixed locations over periods of 30 minutes to two hours. The receivers may be positioned up to 300 km apart. Only dual frequency, carrier phase differential receivers capable of measuring the differences in time of arrival of the civilian GPS signal (L1) and the encrypted military signal (L2) are suitable for such high-accuracy static positioning.

CORS and OPUS: The U.S. National Geodetic Survey (NGS) maintains an Online Positioning User Service (OPUS) that enables surveyors to differentially-correct static GPS measurements acquired with a single dual frequency carrier phase differential receiver after they return from the field. Users upload measurements in a standard Receiver INdependent EXchange format (RINEX) to NGS computers, which perform differential corrections by referring to three base stations selected from a network of continuously operating reference stations (CORS). NGS oversees two CORS networks; one consisting of its 600 base stations of its own, another is a cooperative of public and private agencies that agree to share their base station data and to maintain base stations to NGS specifications.