The use of location-based technologies has reached unprecedented levels. Location-enabled devices, giving us access to a wide variety of LBSs, permeate our households and can be found in almost every mall, office, and vehicle. From digital cameras and mobile phones to in-vehicle navigation units and microchips in our pets, millions of people and countless devices have access to the Global Positioning System (GPS). Most of us have some basic idea of what GPS is, but just what is it, exactly, that we are all connected to?

More correctly, GPS (as the S implies) is a system composed of the receivers, the constellation of satellites that orbit the Earth, and the control centers that monitor the velocity and shape of the satellites’ orbits. According to the US Naval Observatory, there are currently 32 satellites in the GPS constellation (2012). Out of all the satellites in orbit, 27 are in primary use (expanded from 24 in 2011), while the others serve as backups in the event a primary satellite fails. We will discuss the importance of this number in the following section.

Together, the satellites, control centers, and users make up the three segments on which GPS relies: the space segment, the control segment, and the user segment. These segments communicate using radio signals. 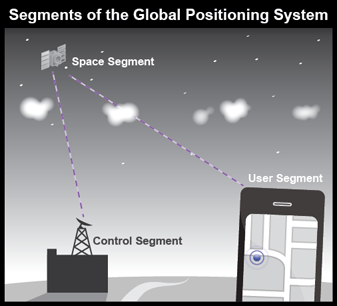 Figure 5.5: Diagram of 3 segments of GPS.
The Global Positioning System is based on the interoperation of three distinct segments.
Credit: Joshua Stevens, Department of Geography, The Pennsylvania State University.

The space segment consists of all the satellites in the GPS constellation, which undergoes continuous change as new satellites are launched and others are decommissioned on a periodic basis. Each satellite orbits the Earth following one of six orbital planes (Figure 5.6), and completes its orbit in 12 hours. 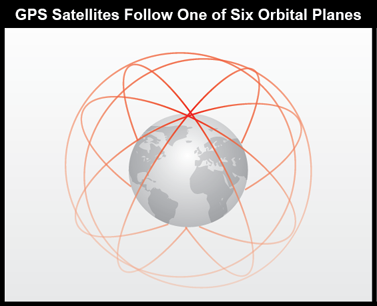 Exactly why three satellites are needed to determine one’s position will be covered in section 5.5 of this chapter. As you will learn, this process is very similar to the method used by earlier surveyors and navigators who calculated locations with incredible accuracy long before the advent of satellite technology.

To view a map of the operational status of the satellites currently in operation, see the Status of Waas Satellites. Try tracking the movement of an individual satellite of your choice in real-time at N2YO (note the changes in altitude and speed as the satellite moves along its orbit).

Although the GPS satellites are examples of impressive engineering and design, they are not error free. Gravitational variations that result from the interaction between the Earth and Moon can affect the orbits of the satellites. Disturbances from radiation, electrical anomalies, space debris, and normal wear and tear can also degrade or disrupt a satellite’s orbit and functionality. From time to time, the satellites must receive instructions to correct these errors, based on data collected and analyzed by control centers on the ground. Two types of control centers exist: monitor stations and control stations.

Monitor Stations are very precise GPS receivers installed at known locations. They record discrepancies between known and calculated positions caused by slight variations in satellite orbits. Data describing the orbits are produced at the Master Control Station at Colorado Springs, uploaded to the satellites, and finally broadcast as part of the GPS positioning signal. GPS receivers use this satellite Navigation Message data to adjust the positions they measure.

The U.S. Federal Aviation Administration (FAA) estimated in 2006 that some 500,000 GPS receivers were in use for many applications, including surveying, transportation, precision farming, geophysics, and recreation, not to mention military navigation. This was before in-vehicle GPS navigation gadgets emerged as one of the most popular consumer electronic gifts during the 2007 holiday season in North America. It is also before the first GPS-enabled consumer phone (the Nokia N95, released in 2007) and the first cameras with integrated GPS (which did not show up until 2010).

Today, more than one billion smartphones, tablets, cameras, and other GPS-enabled mobile devices have been activated. On these devices, maps and location-based applications account for nearly 17% of “reference” use – above sports, restaurant information, and retail (mobiThinking, 2012).

These devices, and the operators who use them, make up the user segment of GPS.

GPS satellites broadcast signals at two radio frequencies reserved for radio navigation use: 575.42 MHz (L1) and 1227.6 MHz (L2). The public portion of the user segment until 2012 relied only on the L1 frequency; L2 frequency has been used for two encrypted signals for military use only. Gradually, starting in 2005, new satellites have started to use L2C (a civilian use of the L2 frequency) for non-encrypted, public access signals that do not provide full navigation data. GPS receiver makers are now able to make dual-frequency models that can measure slight differences in arrival times of the two signals (these are called "carrier phase differential" receivers). Such differences can be used to exploit the L2 frequency to improve accuracy without decoding the encrypted military signal. Survey-grade carrier-phase receivers - able to perform real-time kinematic (RTK) error correction - can produce horizontal coordinates at sub-meter accuracy at a cost of $1000 to $2000. No wonder GPS has replaced several traditional instruments for many land surveying tasks.

Every GPS satellite is equipped with an atomic clock that keeps time with exceptional accuracy.  Similarly, every GPS receiver also includes a clock. The time kept by these clocks is used to determine how long it takes for the satellite’s signal to reach the receiver. More precisely, GPS satellites broadcast “pseudo-random codes” which contain the information about the time and orbital path of the satellite. The receiver then interprets this code so that it can calculate the difference between its own clock and the time the signal was transmitted. When multiplied by the speed of the signal (which travels at the speed of light), the difference in times can be used to determine the distance between the satellite and receiver, shown in Figure 5.7. 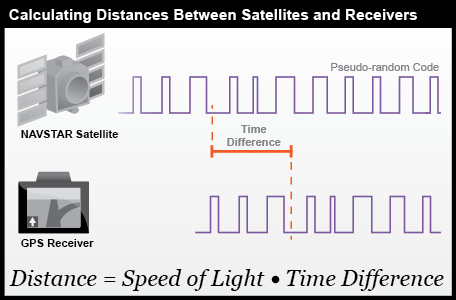 Figure 5.7: GPS receivers calculate distance as a function of the difference in time of broadcast and reception of a GPS signal. Distance = speed of light x time difference.
Credit: Department of Geography, The Pennsylvania State University. Adapted from Hurn (1989).

As discussed above, the GPS constellation is configured so that a minimum of four satellites is always "in view" everywhere on Earth. If only one satellite signal was available to a receiver, the best that a receiver could do would be to use the signal time to determine its distance from that satellite, but the position of the receiver could be at any of the infinite number of points defined by an imaginary sphere with that radius surrounding the satellite (the “range” of that satellite). If two satellites are available, a receiver can tell that its position is somewhere along a circle formed by the intersection of the two spherical ranges. When distances from three satellites are known, the receiver's position must be one of two points at the intersection of three spherical ranges. GPS receivers are usually smart enough to choose the location nearest to the Earth's surface. At a minimum, three satellites are required for a two-dimensional (horizontal) fix. Four ranges are needed for a three-dimensional fix (horizontal and elevation). The process of acquiring a two-dimensional fix is illustrated in Figure 5.8. 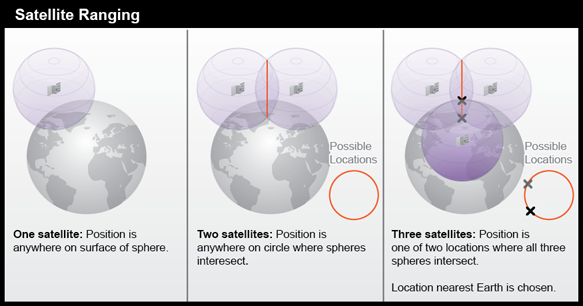 Satellite ranging is similar to an older technique called trilateration, which surveyors use to determine a horizontal location based on three known distances. Surveying and trilateration are discussed more fully in section 5.5 of this chapter.