In addition to the daily requirements for energy and protein, vitamins and minerals are required in relatively small amounts as part of a proper diet to ensure proper functioning and health and are especially important for childhood development. Vitamins and minerals deficiencies can lead to “hidden hunger”, where energy and protein needs are being met but the lack of vitamins and minerals prevents adequate development and health of child rent and saps the productive capacity of adults, for example via iron-deficiency anemia (see below). There are a large number of essential vitamin and mineral components in foods. In this module, we focus on a few that frequently pose major challenges within food systems. If you are interested, full details on the roles of many nutrients can be found in the excellent online text from the Food and Agriculture Organization (FAO) of the United Nations, Human Nutrition in the Developing World. This module's formative assessment may also point to other vitamins and minerals that can become deficient in diets.

Although it is important for other functions, calcium is emblematic in its role in proper bone growth and maintenance. It is especially important for women to consume adequate calcium throughout life, and higher intakes of calcium from childhood on are associated with lower rates of osteoporosis and stronger bones later in life. Vitamin D is also essential for the proper absorption of calcium so that a vitamin D deficiency can lead to calcium deficiency. Dairy products and small fish that are consumed whole (so that fine bones are eaten) are highly calcium-dense foods around the world. Grains are low in calcium but are consumed in such volumes that they often contribute substantial calcium to diets. As is true for many other nutrients, women who are breastfeeding a child have an especially high calcium need because they export calcium in their breast milk to help grow the bones of a developing infant.

Iron is most important as an ingredient in hemoglobin that causes the red color of blood, and the role of red blood cells in carrying oxygen. Iron deficiency thus leads to anemia from a lack of red blood cells, including shortness of breath and overall weakness. Women require more iron than men because of blood loss in menstruation, and pregnant and lactating women require especially high amounts of iron as they expand their blood supply and provide for a growing fetus. During lactation or breastfeeding, mothers pass substantial amounts of iron to their growing infants, so that iron need for women is also high during the period when mothers are nursing their children. When shortage arises during pregnancy or lactation, a woman’s iron stores tend to be sacrificed to the benefit of the child, which can leave a mother who lacks adequate food due to poverty with acute iron deficiency and anemia that greatly complicates other daily activities such as economically important work. The best sources of iron in foods are meat, fish, eggs, green leafy vegetables, and whole grains. Cooking food cast iron utensils is also an easy way to supplement iron in food.

Zinc is an essential mineral that is important in a large number of human cellular enzyme processes. It is important for proper tissue growth, cell division, wound healing, and the functioning of the immune system, among other functions. As such it is very important for children’s health, growth, and development. Zinc is an example of a nutrient that is often used to fortify processed foods and is also naturally present in a wide variety of foods such as red meat, poultry, beans, nuts, and whole grains. One goal of plant breeders recently has been to breed or identify traditional varieties of whole grains and potatoes that are high in zinc and iron. This way of enhancing diets by way of the properties of crop plants is called a biofortification strategy. Because these staple foods are usually present even in the most rudimentary diets associated with extreme poverty, biofortification can be an effective strategy to ease access to these important mineral nutrients in the most vulnerable populations.

Vitamin A or retinol (linked to the word ‘retina’ or part of the eye) is famous for the popularized connection between eating carrots and good eyesight. Vitamin A deficiency is the cause of reduced vision in dim light, called night blindness, as well as a broad correlation to increased infant mortality in children from a variety of causes. True vitamin A is not in fact directly present in carrots and other dark green or pigmented vegetables (collards, squash, sweet potatoes, tomatoes, and even yellow maize) but is readily synthesized in the body from the orange pigment (beta-carotene) that these plant sources contain. True retinol is found in eggs as well as meat and fish products. Like zinc, vitamin A is another crucial nutrient for growth and development that can become deficient in the diets of children and other vulnerable groups (Figure 3.1.2), and has been targeted as a priority for resource-poor populations around the world through the promotion of orange-fleshed sweet potato, other orange vegetables, and yellow maize within smallholder diets and "golden rice" as a genetically engineered innovation in maize varieties that was developed to address vitamin A deficiency. While not all biofortification approaches utilize genetic engineering, golden rice is a further example of a biofortification strategy. 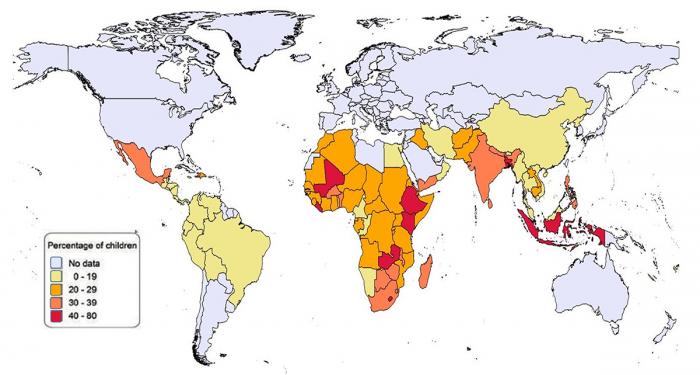 Figure 3.1.2. Prevalence of Vitamin A deficiency around the world, with colors indicating the percentage of children affected. Many of the areas with "no data" are in fact areas where per-capita incomes are high enough that consumers are assumed to be eating enough animal products and vitamin-A-containing vegetables to avoid deficiency. The map shows that prevalence rates in Mexico, Africa, South Asia, East Asia, and the Pacific are highest, reaching up to 80 percent. The rates of deficiency in China, Central America, and South America reach up to 20 percent.
Credit: Steven Vanek, based on data from Bassett & Winter-Nelson, 2010, Atlas of Human Nutrition

Vitamin C is not a major deficiency challenge worldwide, though in the 1700s vitamin C deficiency was linked to the disorder scurvy in sailors due to highly monotonous diets. Rather it is presented here because of its iconic association with fresh fruits and vegetables, especially citrus fruit but also potatoes, bananas, spinach, collards, cabbage, and many of the weeds that are consumed around the world as leafy vegetables. True deficiency is thus uncommon in most diets around the world, though vitamin C’s role as an antioxidant and health-promoting vitamin that “cleans up” harmful free radicals in the body has been promoted. Also, vitamin C is an excellent example of a positive interaction between nutrients. Vitamin C promotes iron absorption. Since most plant sources of iron are much less available than so-called heme iron in animal iron sources, fruits and vegetables with vitamin C in the same meal with plant-based sources of iron are an excellent way for people that eat meat-free diets (or just individual meals without meat) to absorb sufficient iron.

A number of other vitamins and minerals are essential, and in general, the way that a food system can work to provide these to human populations is to make a wide variety of plant-based foods as well as a few meat options, available to consumers. As we will see soon, this is in contrast to what certain sectors of the food system often make available to consumers. Some of these important vitamins and minerals are Vitamin C, Vitamin D, the B-complex vitamins, potassium, and magnesium, and you may see these arise as concerns in the formative assessment below.

A complete description of vitamins, minerals, and other diet components in an accessible format can be found in the online book from the FAO, Human Nutrition in the Developing World.

‹ Protein and Amino Acids: Building Blocks up High-Quality Fats and Shifting Paradigms Around Fat in Diets ›