In this section, you will learn about the concept of geo-referencing imagery, which is an important concept. Without it, no further photogrammetric processing of the imagery can take place.

In order to utilize the photogrammetric mathematical model, i.e., the collinearity condition, for the production of any mapping products, the following information needs to be made available:

In this section, we will focus on the process of determining the six exterior orientation parameters. The camera position can be measured accurately using the airborne GPS technique using a GPS antenna on board the UAS. The three camera positions can also be computed using the process of aerial triangulation, as we will discuss soon. However, there are two methods for determining the camera attitude or orientation, and those are the aerial triangulation process and the direct measurement from the IMU, as we discussed in Lesson 6.

Aerial triangulation is usually performed on a photogrammetric block (Figure 7.2), which consists of all the imagery acquired over the project area. Figure 7.2 illustrates a photogrammetric block of imagery consisting of three strips, each of which has multiple overlapping images. Also shown are the different types of image overlaps. The top and middle strips contain images with 60% forward lap, while the bottom strip contains imagery with 80% forward lap. You may also notice in the figure that the middle and the bottom strips are overlapping by the amount of 30%. Such overlap is called side lap. 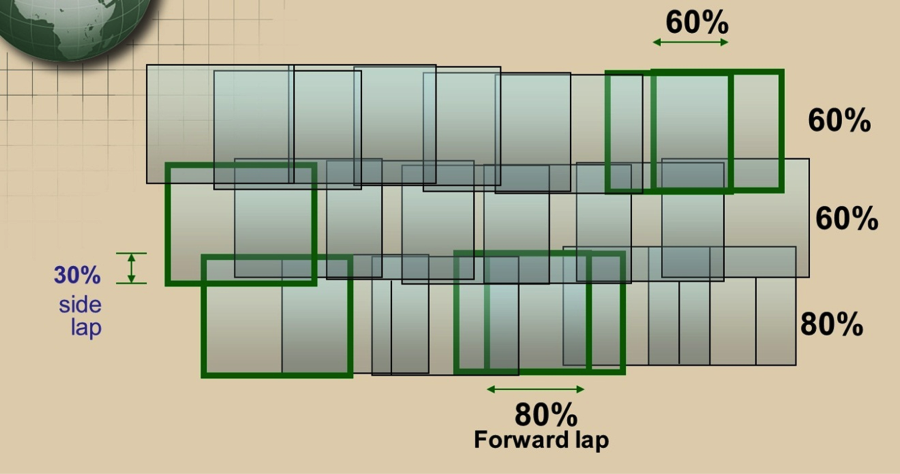 In the last section (the photogrammetric process), we mentioned a few terms related to aerial triangulation. We will briefly describe these terms in the following sub-sections:

Relative Orientation is the process of orienting images relative to one another (i.e., it recreates the “relative” position and attitude of the images at the instants of exposure), as illustrated below. Figure 7.3 shows four images that are connected to each other in space through the aircraft/GPS trajectory but are not necessarily connected to the ground datum (i.e., they are floating in space).

The process of leveling and scaling the stereo model (formed from two images) with respect to a reference plane or datum using ground control points is shown in Figure 7.4. Figure 7.4 represents the same four images as Figure 7.3, but this time the block was tied to the ground datum through the use of seven ground control points (represented by the black stars). 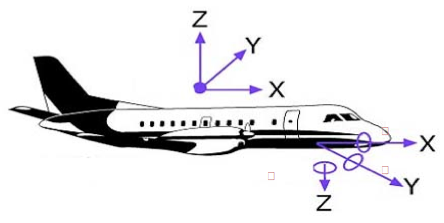 Space Resection is the process of determining ray intersection in space to conclude camera position. See Figure 7.6. The method of space resection is a purely numerical method using collinearity equations to simultaneously yield all six elements of exterior orientation (X, Y, Z , omega, phi, and kappa). Once these elements are known, a stereo plotter can measure the photo coordinates of any point in a photo (x,y) and the ground coordinates can be computed. Ortho rectification software also utilizes space resection for ortho-rectifying an image. Figure 7.6 illustrates six images. Each of them has rays from the ground entering the camera through the lens. The intersection of the rays entering the camera at point "O" represents the photo center location, which is important for the determination of the exterior orientation parameters described earlier. 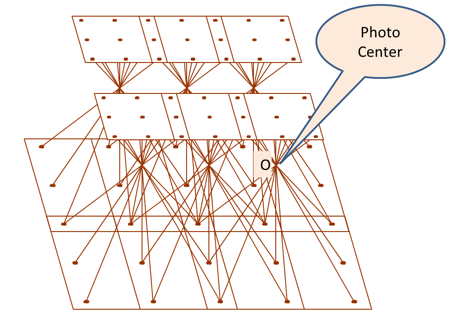 Aerial triangulation can be defined as the process of densification of a sparsely distributed horizontal and vertical control network through:

A conventional (film based) aerial triangulation process consists of the following steps:

Data Preparation: Using a stereoscope, three points are selected down the center of each photo, approximately 1” from the top and bottom and at the center. These points are also marked on every overlapping photo on which they occur. They are often called “pass points” along strips and “tie points” between strips. See Figure 7.7. Ideally, pass points are selected in flat areas of high contrast that are free of obstructions and shadows.

Figure 7.7 represents three overlapping photos that are used to extract pass points between them. Notice that the three middle points for the middle photo (a, b, c) were located and marked on the same locations in the overlapping right and left image. This process is called point marking.

Point Marking: A good point marking device is characterized with: 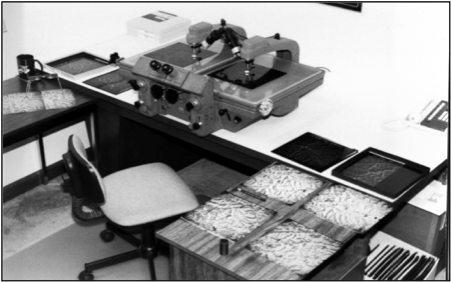 Point Measurement: A skilled technician with analytical stereo plotting instruments records the location of each previously marked Pass point and tie point on each photograph.

Numerical Computation of Aerial Triangulation: Here is a summary for the steps taken within the processing software:

In the last two decades, navigation technologies have advanced to the point that enabled manufacturers of the Inertial Navigation Systems (INS), usually used for missiles and submarines navigation, to produce an Inertial Measurement Unit (IMU) to accurately measure the orientation of airborne sensors such as cameras and LiDAR. The IMU, which we briefly described in Lessons 2 and 6, are used either to replace the process of aerial triangulation or to assist its solution. Most UAS, including the small ones, carry on board a GPS unit and an IMU unit. Unfortunately, most of these miniaturized low cost IMU that are used for UAS are not accurate enough to replace the aerial triangulation. Such low accuracy IMU is usually used to navigate the UAS but not to support the aerial triangulation. On the other hand, the GPS antenna in most UAS is a survey grade quality that can receive signals from both GPS and GLONASS. Some of the UAS can receive signals from OMNISTAR with real time corrections.