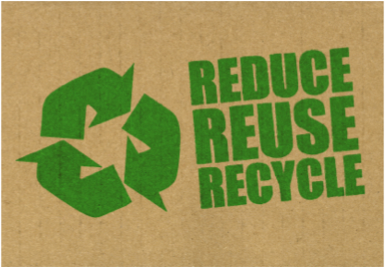 One green design principle is that if there is less waste produced, then there is less to clean up. Please watch the following short (2:23) video that highlights this principle.

Let's start with a simple concept. If you keep your room neat and tidy you won't have to clean up as much. If your room gets really messy then you will have a lot to clean up. The same concept is applied in green chemistry. If we prevent waste from being produced then there would be less to clean up. Now this is almost impossible to have zero waste for any given chemical reaction. On a global scale, The beauty of this principle is that it can be applied to almost every single chemical reaction conducted. For example, Polystyrene is a fossil fuel derived polymer used to make all disposable cups and packaging materials. The polymer itself needs to be expanded before it can be used in packaging. Traditionally this was done with CFCs or chlorofluorocarbons which deplete the ozone layer. Now this is done with carbon dioxide waste from other industrial processes. Instead of releasing carbon dioxide into the atmosphere and contributing to the greenhouse effect, this is contained and used to expand polystyrene. So, there is no additional carbon dioxide being released into the atmosphere.

A lot of waste is produced on a global scale. Unless the waste is recycled it fills up in our landfills, destroys habitats, and will be a very serious health hazard. Imagine if one day the waste that we produce can be naturally be broken down by microbes in the environment or dissolve into safer materials. This principle explores such a concept.

Ideally, whatever we use and throw away would present no hazard to the environment and would not accumulate in landfills. If you've ever had to get stitches because of an injury, the stitches slowly dissolve over time. This is in fact a polymer called Polyglycolic acid which is broken down into its respective monomers by enzymes in our body. This is then either respired as carbon dioxide or excreted in our urine. There is a new class of plastics known as the bioplastics. These polymers are made from natural monomers such as cellulose and lactic acid and can be broken down in the environment. For more information on these, please see our Synthetic Polymers video.

As a result of these bioplastics, carrier bags can be broken apart by microbes in the environment. This is important because it reduces the amount of waste that accumulates in landfills. Egg cartons once made of polystyrene, which is derived from petroleum-based products, are now usually packaged in newspaper material which can be recycled and therefore, do not accumulate as waste.

Some processes result in waste that is toxic or hazardous. The following video (2:04) showcases a genetically modified bacteria that has been developed to produce an enzyme that, when used with glucose, can replace a known carcinogen in a widely used synthesis process. In addition, the replaced chemical is derived from nonrenewable fossil fuels, while glucose is readily available, non-toxic, and renewable.

Principle 3
Click for a transcript of Green Chemistry - Principle 3.

The next time you look at tights, certain paints, or even plastics used in window frames you may want to think about the raw materials from which they are made. Do you know any of these materials? Pause the video, think, and resume when ready.

If you said Nylon for tights, you'd be right. If you said Polyurethane you'd be right for paints and coatings. Finally, plastic window frames are made of PVC. These contain a plasticizer allowing the frames to be easily molded. All of these materials require Adipic acid in their production. Usually, Benzene is used to make this compound, but unfortunately Benzene is carcinogenic or cancer-causing. Instead, glucose and a special enzyme extracted from genetically modified bacteria can be used to produce Adipic acid. What do you think the advantage is in doing the synthesis in this way? Pause the video, think about this, and resume when ready.

An answer is that glucose is harmless and is essentially sugar. So conducting the synthesis in this way protects the workers who would produce this compound by coming into contact with carcinogenic Benzene.

Many chemical processes are designed to be as efficient as possible. There are many reasons why this is done.

Firstly, it is very costly if the chemical synthesis is not designed to be efficient. In industry, chemists are aiming to modify or develop reactions so that they'll proceed an ambient temperature and pressure. This is because it costs energy to produce both high and very low temperatures.

The 2005 Noble Prize for chemistry was jointly awarded to a group of chemists who developed an energy efficient catalyst for a high atom economy reaction so that it was able to proceed its standard ambient temperate and pressure. Recall that a high atom economy reaction is one that uses all the atoms in the reactant to create the product or products. The reaction is called the Metathesis method and is responsible for the synthesis of many polymers with special properties, additive to polymers and fuels, and biologically active compounds such as insect pheromones, herbicides, and drugs.