10.9 See how the gradient wind has a role in weather.

10.9 See how the gradient wind has a role in weather.

Replacing the pressure gradient force ( ) with –fVg in the gradient balance equation results in an equation that relates these gradient velocities to the geostrophic velocity:

In a regular low (middle, figure below), R > 0 so that Vg > V. The velocity in a curve around a low-pressure area is subgeostrophic.

In a regular high (right, figure below), R < 0 so that Vg < V. The velocity in a curve around a high-pressure area is supergeostrophic. 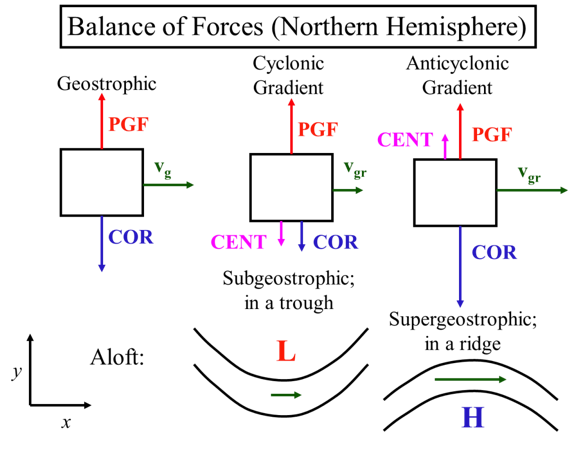 Gradient balance in Northern Hemisphere. left: Geostrophic balance; center: regular low balance; right: regular high balance. Note that the PGF is independent of velocity but both the Coriolis force and the centrifugal acceleration are dependent on velocity. In the figure the geostrophic velocity is represented by vg and the gradient wind velocity is represented by vgr.
Click here for an accessible alternative to the figure above

*Represented as boxes with arrows*

Subgeostrophic in a trough: Low pressure in a trough with a green arrow underneath pointing right

Supergeostrophic; in a ridge: high pressure below a hill with a green arrow above pointing right

Think of it this way. The pressure gradient force is independent of velocity and so is always there for a given geopotential gradient. In a regular low, the centrifugal and Coriolis forces, both dependent on velocity, sum together to equal the pressure gradient force, whereas for geostrophic flow, only the Coriolis force does. Thus, the velocity in the gradient balance case must be less than the geostrophic velocity for the same geopotential gradient. 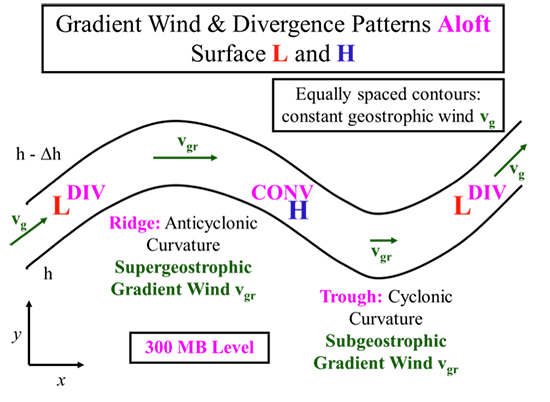 Subgeostrophic and supergeostrophic velocities in flow aloft in the Northern Hemisphere.
Click here for an accessible alternative to the figure above

Diagram of a wave shape. It starts as a low-pressure zone with a constant geostrophic wind (vg) moving up along the wave, it is also labeled with divergence, at the ridge of the wave super geostrophic gradient wind vgr is horizontal. The ridge also has anticyclonic curvature. The wave then moves downward, in a high-pressure zone, labeled with convergence until it reaches a trough with cyclonic curvature and subgeostropic gradient wing vgr which is represented by a horizontal arrow. The wave then repeats and vg goes upward toward the ridge from a low-pressure zone that is diverging.

Thus subgeostrophic flow and supergeostrophic flow aloft are directly related to the formation of weather at the surface. Other factors like vorticity are also very important. The video below (1:09) describes how the gradient wind flow aloft can affect surface weather.

Let's see how the gradient wind flow aloft can affect surface weather. Look at how the velocity changes as air flows around the ridge and then a trough aloft. Initially, the velocity is about geostrophic and straight-line flow. As it rounds the ridge, it speeds up. And then it slows down again to geostrophic in the straight section. As it goes through the trough, around the low-pressure loft, it slows down to subgeostrophic and then speeds up to geostrophic in the next straight section. The speeding up causes divergence aloft. And the slowing down causes convergence aloft, just as you learned in lesson nine. You also saw how convergence aloft can lead to divergence at the surface. This contributes to a surface high. And how divergence aloft can lead to convergence at the surface, which contributes to a surface low. Thus, gradient flow contributes to surface weather. We often see a surface low forming on the downwind side of a trough.

‹ 10.8 A Closer Look at the Four Force Balances up 10.10 What does turbulent drag do to horizontal boundary layer flow? ›
METEO 300 Fundamentals of Atmospheric Science