11.11 Turbulent Eddies: A Cascade of Energy

11.11 Turbulent Eddies: A Cascade of Energy

If we start with the equation:

and we write each term as its mean and turbulent parts and then multiply all these terms out and take the Reynolds average, we can then apply the rules of averaging in Equation [11.1], and only two terms survive:

Which size eddies have the most energy? We can look at the relative intensity of the different scales of wind by considering the energy associated with motions of different sizes. Remember that by the Taylor hypothesis, the size of the eddy and the period of the eddy are related so that large eddies have longer periods and smaller eddies have smaller periods.

So, relative spectral intensity is just the amount of kinetic energy associated with that size eddy and the eddy size is associated with a period required for the eddy to pass over a sensor (see figure below). 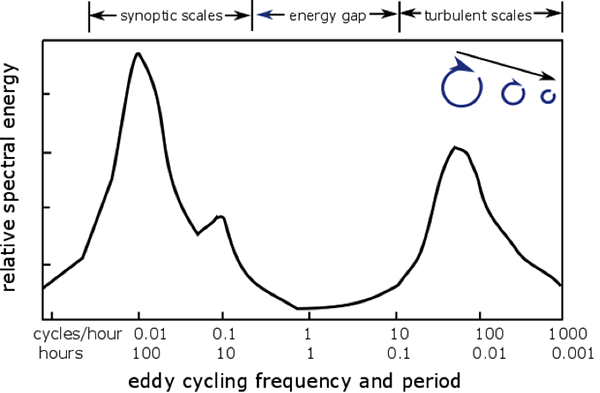 Relative spectral energy (i.e., energy per unit frequency) as a function of eddy cycling frequency or time period. As eddies generated at the PBL scale by convection and shear break down into smaller eddies, the energy is dissipated.
Credit: W. Brune, after R. B. Stull's An Introduction to Boundary Layer Meteorology (1988), from a study of I. Van der Hoven (1957).

Lewis Richardson wrote a poem about this process for whorls (a.k.a. eddies) in 1922:

Which feed on their velocity;

And little whorls have lesser whorls,

And so on to viscosity

(in the molecular sense).

‹ 11.10 How do these fluxes look? up 11.12 The Surface Layer’s Energy Budget ›
METEO 300 Fundamentals of Atmospheric Science