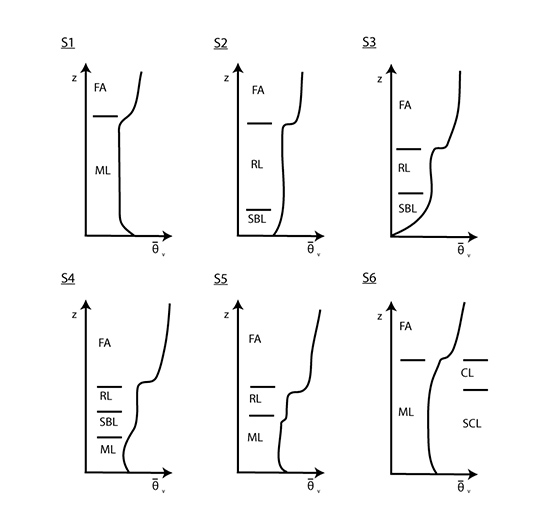 Start with the late afternoon (S1 above). Surface heating causes the air near the surface to have a higher virtual potential temperature than the air just above it, so that the air is superadiabatic. Thus, air parcels of this warm moist air rise all the way up to the point in the free atmosphere where the virtual potential temperature is as great or greater than the air parcel’s value. At this point the air parcel likely mixes with the surrounding air and therefore contributes to raising the mixed layer’s temperature. As convection of air parcels continues, the slightly cooler air from the upper boundary layer sinks around the rising air parcels and continues the mixing process as the air parcels going up encounter air coming back down. The result is a well-mixed boundary layer. 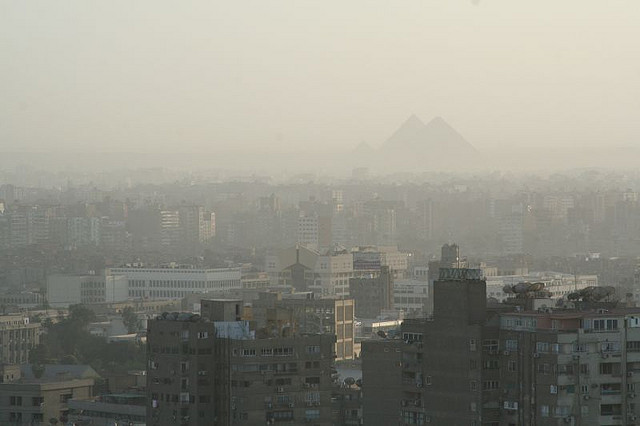 Think about morning and evening rush hours. During morning rush hour, which is near sunrise, the vehicle emissions mix into a shallow boundary layer and hence the mixing ratios of the pollutants can be quite substantial. This situation leads to the photochemistry that makes pollution, including ozone. In the evening, the rush hour traffic also emits the same amounts of pollutants into the boundary layer, but because the boundary layer height is so much greater in the early evening than in the morning, the pollutant mixing ratios are less because the same level of emissions are being mixed into a larger volume of air. Thus the effects of evening emissions are not as severe as the effects of morning emissions. In addition, modeling the planetary boundary layer height correctly is essential for accurate air quality modeling.

‹ 11.2 A Day in the Life of the Boundary Layer up 11.4 Frozen: The Taylor Hypothesis ›
METEO 300 Fundamentals of Atmospheric Science