11.2 A Day in the Life of the Boundary Layer

11.2 A Day in the Life of the Boundary Layer

The boundary layer is not frozen in time but instead changes dramatically during the course of the day. Let’s start with the midday when the boundary looks like the hazy scene over Maryland (figure in 11.1). The boundary layer consists of a mixed layer that is stirred by solar heating of the surface and convection of warm moist air that pops up sporadically from place-to-place and time-to-time, and, as a result, mixes the air within the boundary layer. This convective stirring takes about ten to twenty minutes to go from bottom to top. As the air bubbles up, it mixes with the air surrounding it and with the air from the free troposphere at the top, thus creating an entrainment zone, which is where the clouds are.

In the morning, the sun returns to heat the surface and to start driving convection and mixing again. This convection bubbles up, bumping into and entraining air from the residual layer. As the solar heating increases, the convection has more energy and can rise higher and entrain more air from the residual layer. Eventually, the air driven by convection reaches its maximum energy level and this maximum energy limits how high the boundary layer will grow into the stable free troposphere above it. 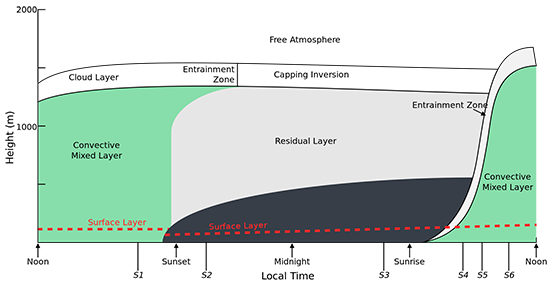 Diurnal evolution of the atmospheric boundary layer. The black region is the stable (nocturnal) boundary layer. Time markers S1–S6 are used in lesson 11.3. After R. B. Stull's An Introduction to Boundary Layer Meteorology (1988).
Credit: NikNaks (Own work, based on [1]) [CC BY-SA 3.0], via Wikimedia Commons

The following video explains the variation of the planetary boundary layer over the course of a typical day:

Let's look at the variation of the planetary boundary layer over the course of a typical day. We'll start midday when the sun is out and solar heating of the surface is causing buoyant air parcels to rise until the virtual potential temperature matches that of the overlying air. These air parcels have momentum, and they overshoot the level of neutral buoyancy. In the process, they entrain air from the free troposphere. Clouds form in this layer. The rising air parcels collide with the air above them and rub against the air around them, producing a whole range of different eddie sizes in mixing. These large, buoyant eddies cycle in tens of minutes, mixing the air. As the sun sets later in the day, there's less solar energy to power the convection that stirs the mixed layer, and the boundary layer collapses, leaving behind a residual layer that contains the mixed layer air that was leftover. Emissions from the surface keep pouring into the boundary layer, but the boundary layer height is much lower. With less turbulence in the residual layer, the air can speed up. The faster moving air above the slower moving air in the boundary layer causes a shear to develop between the two air masses. And sporadically, turbulence is generated when the shear breaks down, mixing air and increasing the boundary layer height. At sunrise, solar heating again begins to warm the surface, and the warm parcels rise up entraining residual layer air until eventually, the mixed layer reaches its maximum height again.

‹ 11.1 The atmospheric boundary layer is your home. up 11.3 The Story of Diurnal Boundary Layer Growth Told in Vertical Profiles of Virtual Potential Temperature ›
METEO 300 Fundamentals of Atmospheric Science