The challenge of confronting the impacts of climate change is often framed in terms of two potential paths that civilization might take: adaptation and mitigation. Mitigation involves reducing the magnitude of climate change itself and, as we will see in the final two lessons, can be subdivided into two alternative strategies: emissions reductions — dealing with the problem at its very source, and geoengineering — somehow offsetting the effects of greenhouse gas emissions.

Adaptation, by contrast, involves efforts to limit our vulnerability to climate change impacts through various measures, while not necessarily dealing with the underlying cause of those impacts. The reference to "our" in the previous sentence is critical, as adaptive measures typically only deal with impacts to human civilization; they do not and, indeed, cannot deal with impacts to ecosystems and our environment. Coral reefs, for example, are unlikely to adapt to the twin impacts of global warming and ocean acidification. A similar case can be made for other ecosystems and living things. At some level, such considerations call into question what we really mean by adaptation. If we were to see the collapse of major ecosystems such as coral reefs, we would in turn see the loss of the ecosystem services they provide — a potentially catastrophic loss for human civilization. We will consider such potential costs when we attempt to work out the economics of climate change in a later lesson.

Such considerations call into question whether we can indeed define our true adaptive capacity to climate change in a way that is divorced from the larger impacts on our environment. Nonetheless, let us for the moment consider adaptation and mitigation as two alternative but potentially complementary and certainly not mutually exclusive strategies for dealing with climate change.

Figure 10.1: The place of adaptation in response to climate change
Click for a text description of Climate Change flow chart.
This image is split into two sections; one inside a purple-lined box labeled "IMPACTS and VULNERABILITIES", and the other outside. There are five light-purple boxes on the outside: "Policy Responses" is the first one, which points to "MITIGATION of Climate Change via GHG Sources and Sinks" and "Planned ADAPTATION of the impacts and Vulnerabilities". "Planned ADAPTATION..." points to the purple-lined box. "MITIGATION..." which leads to "Human Interference". "Human Interference" connects to "CLIMATE CHANGE including Variability". "CLIMATE CHANGE..." connects to the purple-lined box. Inside the box, there are four more light-purple boxes each connecting to the next: "Exposure"→"Initial Impacts or Effects"→"Autonomous Adaptations"→"Residual or Net Impacts". The purple-lined box then points back to "Policy Responses".
Credit: IPCC

The choice between adaptation and mitigation is in fact, in many ways, a false choice — we will most likely have to do both. As we have seen previously in this course, we are already committed to additional warming of perhaps as much as 1°C due to the greenhouse gases that we have emitted already — this is known as committed climate change. Aside from the possibility of controversial geoengineering measures (which we will discuss in our next lesson), we cannot mitigate that change. So, we must adapt to at least that amount of climate change. 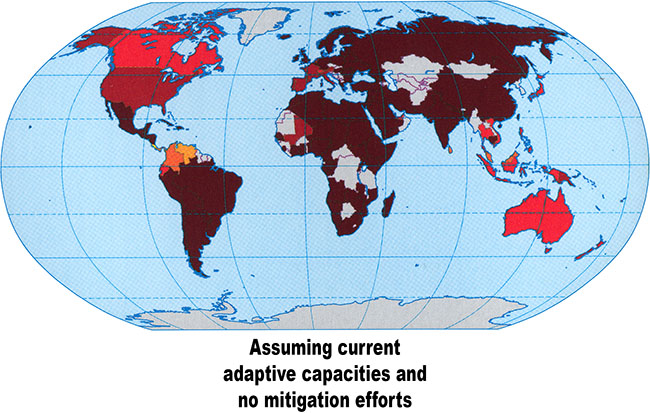 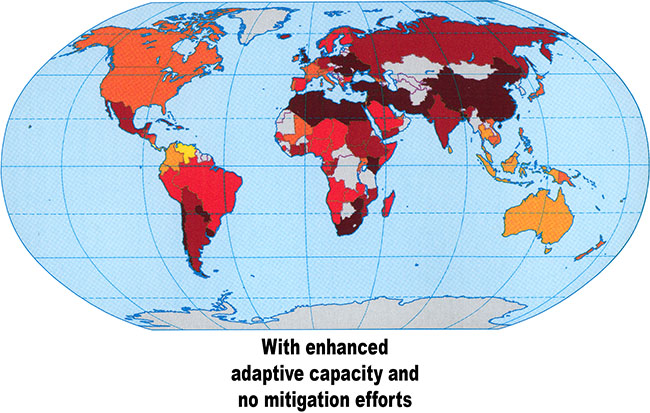 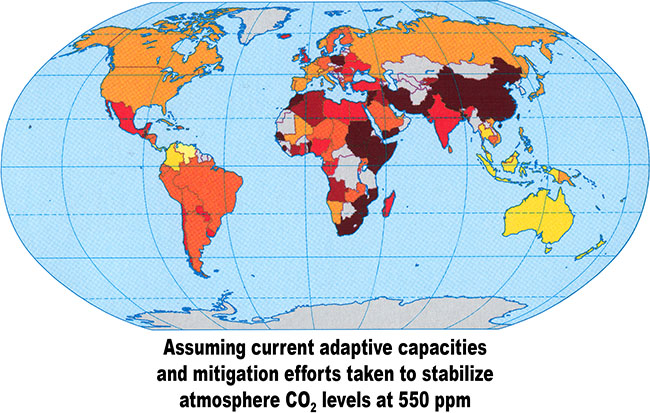 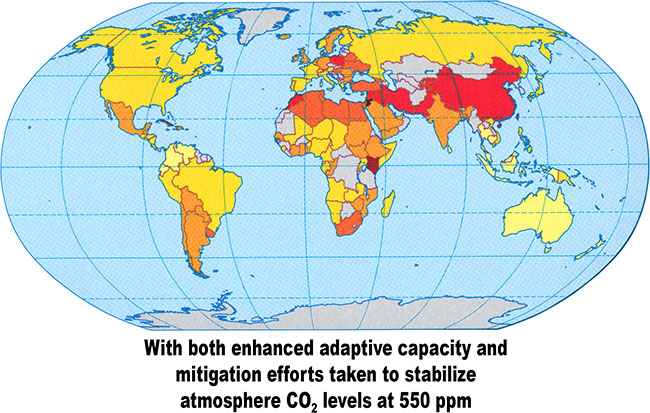 As is apparent from the above comparisons, much of the world would likely suffer extreme vulnerability to climate change in the absence of any mitigation efforts at all, regardless of what adaptive measures are taken. Yet, mitigation alone, for example limiting CO2 concentrations to 550 ppm, would in the absence of any adaptive measures still result in great vulnerability, particularly in tropical and subtropical regions. However, a combination of adaptation and mitigation could reduce vulnerability to modest levels for most of the world.

We will talk about mitigation approaches in the final two lessons. For the rest of this lesson, we will examine adaptive strategies. We will focus on specific examples in the areas of coastal protection, water resources, and agriculture/food resources.