Climate change is already having a demonstrable impact on natural ecosystems and this is particularly evident when looking at niche (e.g., mountain and high-latitude) environments, where species are highly adapted to the prevailing past climatic conditions and have gone extinct, or are in the process of potentially going extinct because of rapidly shifting climatic conditions.

The poster child of climate change-related extinction is the the Golden Toad. This magnificent amphibian once ranged throughout the high-elevation cloud forests of Monteverde, Costa Rica. First discovered in the 1960s, the toad appears to have gone extinct in the late 1980s. Scientist Alan Pounds and his colleagues have argued that the demise was due to climate change associated with a long-term drying as the cloud forests have been lifted to higher and higher elevations by a warming atmosphere (the warmer the atmosphere, the higher the so-called lifting condensation level at which clouds first form as one moves up in elevation). Other scientists have since noted that the influence of climate change in this extinction event was likely somewhat more subtle—with the immediate factor having been outbreaks of a fungus known as chytrid (this fungus has been implicated in globally-widespread decline in amphibian populations). The drying conditions may have made the golden toad more susceptible to these fungus outbreaks. 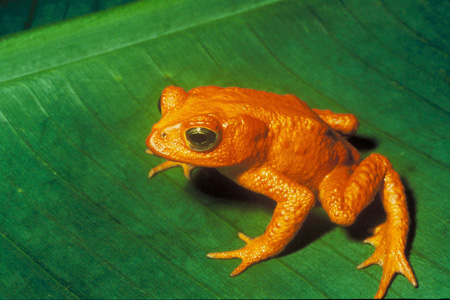 Another poster child is the Polar Bear. Polar bears require a sea ice environment to hunt their primary food source—seals. As we saw in our previous discussion of climate change projections, it is very possible that with a little more than 1°C warming (which we likely commit to with concentrations higher than 450ppm) that environment will essentially disappear within the next century—that is to say, there will be an increasingly long ice-free period from the spring through the fall over most of the polar bear's range. This means that the hunting season for polar bears is getting increasingly short. The impacts are already seen in the declining weights of adult females and the adverse impact this is having on the sustainability of current polar bear populations.

An adult female needs to maintain a minimum of roughly 200 kg of fat to bring a cub to term, and even more to bear twin or triplet cubs. Such reserves were achievable in the past by feasting on seals over a roughly 8-month hunting season. As the hunting season becomes shorter, females are finding themselves unable to sustain these fat reserves. The relative abundance of triplet and twin cub births has already largely given way to single cub births. One recent study by polar bear expert Andy Derocher of the University of Alberta indicates (see, e.g., this news article in the Calgary Herald) that with as little as a one month additional shortening of the season, the majority of adult female polar bears will be unable to bring even a single polar bear cub to term. While some populations of polar bears in the Arctic have actually shown modest increases in the past (generally due to hunting restrictions and other miscellaneous factors unrelated to climate), a majority of well measured populations have indeed shown steady declines in recent decades (see, e.g., the detailed information on polar bear populations provided by the organization Polar Bears International). Other species such as walruses too may be under similar threat from Arctic warming and sea ice disappearance. 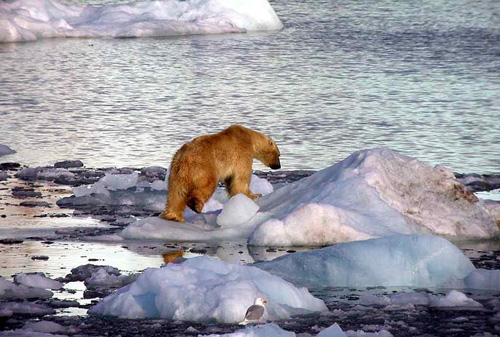 Because of the imminent threat to the species of ongoing warming and Arctic sea ice decline, the U.S. formally designated the polar Bear as a threatened species in May 2008 under the endangered species act.

We have looked at two particularly striking examples of climate change impacts on animal species, but it is worth stepping back and looking at the bigger picture, considering for example entire ecosystems. There is no better example than coral reefs.

In polar regions, coastal regions, and a narrow band of wind-induced oceanic upwelling near the equator the upwelling of deep water supplies nutrients (e.g., phosphorus, nitrogen, oxygen, etc.) needed to maintain the rich trophic structure that characterizes these marine ecosystems. In contrast, almost all of the tropical and subtropical oceans lack the upwelling of deep water necessary to supply the nutrients. Therefore, these regions generally become oceanic "deserts" that are largely devoid of biological productivity. An important exception are coral reefs, made up largely of the dead calcium carbonate skeletons of previously live coral, which build over time to create elaborate natural reef structures. These structures provide an environment that is home to a rich oceanic food chain. While they occupy less than 0.1% of the world's oceans, they are home to 25% of all marine species, constituting a major reserve of marine biodiversity. Coral reefs, like many other ecosystems (e.g., tropical rainforests) provide so-called ecosystem services—that is to say, they provide resources (e.g., food, recreation and tourism, medicinal products, shoreline protection, etc.) that are of great value to civilization. It has been estimated that the average annual ecosystem services provided by coral reefs globally is a staggering nearly 0.4 trillion dollars. Of course, one could argue that no such dollar figure can truly capture the value of something like the world's coral reefs, and that simple economics and cost/benefit analysis cannot measure the true value to humanity of the ocean's biodiversity or of natural wonders such as the Great Barrier Reef of Australia. We will revisit these deeper, philosophical questions in a later lesson. For now, suffice to say that the loss of coral reefs could represent a monumentally great cost to civilization and our environment.

As it happens, coral reefs are under multiple assault by anthropogenic influences. The whole of these impacts is greater than the sum of their parts, since organisms subject to simultaneous stresses have a greatly reduced behavioral elasticity/adaptive capacity. In addition to the impacts of anthropogenic increases, coral reefs are threatened by pollution, i.e., chemical contaminants that enter coastal waters through river runoff, and by physical destruction by humans via motor boat damages or misuse/overuse by the tourism industry. Increased damage by ultra violet (UV) radiation due to ozone depletion is also a factor.

Increases in atmospheric , however, may be the proverbial straw that broke the camel's back. This is particularly true because it is a double whammy for corals. First, there is the effect of the warming itself. When ocean waters become exceptionally warm (e.g., into the low 30's °C), the algae that typically live with corals will flee, seeking cooler waters. Since the corals maintain an important symbiotic relationship with these algae, losing them is highly detrimental to the health of the coral. The algae are also what give the corals their color—hence, when these symbionts flee, they leave behind only the white color of the coral themselves, and the event is thus termed coral bleaching. There is little in nature that provides quite the contrast of the comparison between a healthy and bleached coral reef.

As sea surface temperatures increase, the frequency of bleaching events increases accordingly. Thus, ongoing global warming is projected to lead to increasing stress on coral reefs from bleaching alone. Coastal damage from more intense hurricanes are an added threat. An even greater impact, however, is likely to arise from direct effects of the increasing atmospheric concentrations, the phenomenon of ocean acidification discussed in an earlier lesson. 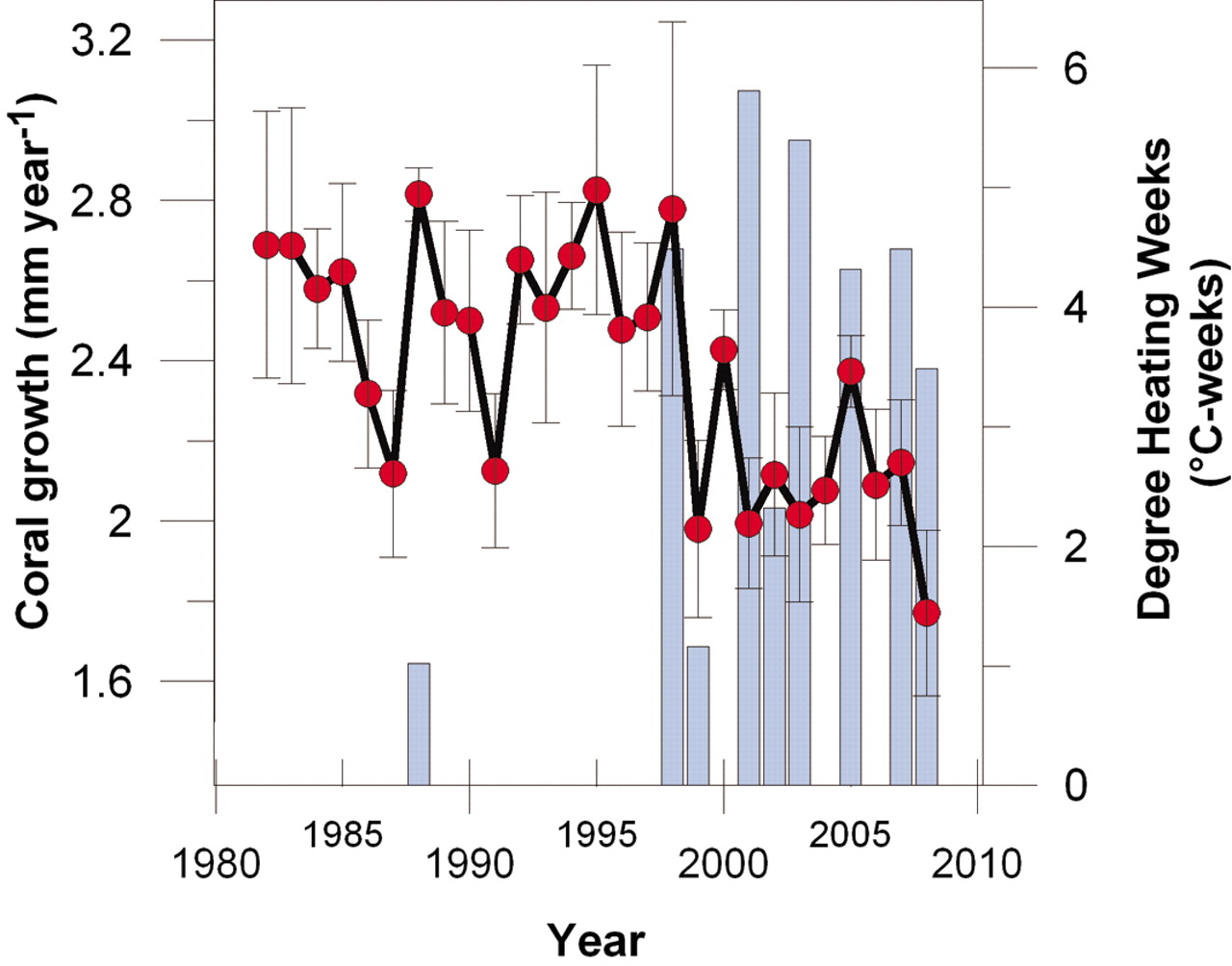 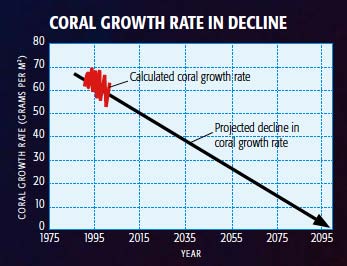 As atmospheric concentrations increase, the increased dissolved in the upper ocean acts to lower the pH of the ocean. As the ocean becomes more acidic (or, if you like, less basic—technically speaking the ocean is on average alkaline, not acidic), the ocean chemistry increasingly favors the dissolution of calcium carbonate (calcite)—the very substance corals use to grow their skeletons. This means that coral growth rates decline. If we extrapolate this relationship based on a middle-of-the-road future fossil fuel emissions scenario, we reach the point of zero coral growth by the end of this century. In reality, the collective effects of other impacts, in particular increased bleaching from warming ocean waters, has lead scientists to project a far more imminent demise of coral reefs worldwide—as soon as a few decades from now—if we continue with business-as-usual fossil fuel emissions (see, e.g., this news article about a UNESCO-funded scientific study of this issue).

Figure 9.11: Threat to Species and Ecosystems a Function of Degree of Future Warming.
Click Here for Text Alternative for Figure 9.11