We have already seen that climate change is likely to increase the frequency and severity of many types of severe weather impacts, including heat waves, intense precipitation events, and more intense hurricanes. 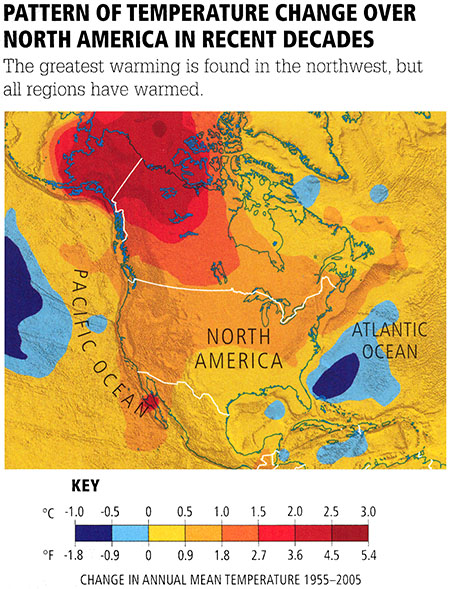 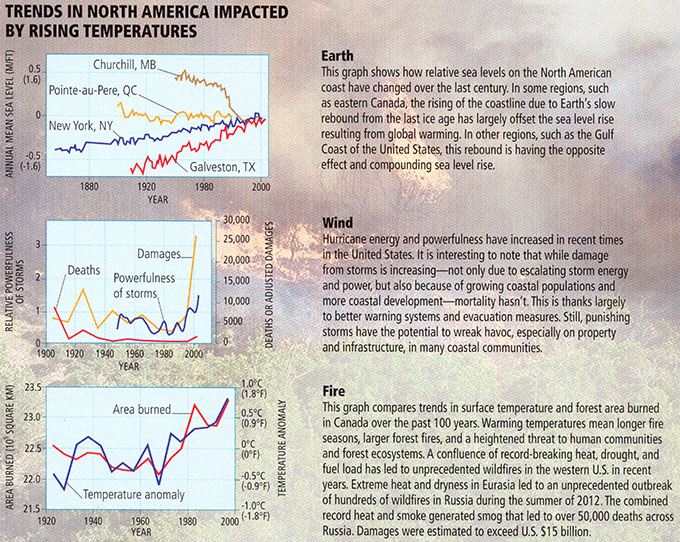 This graph shows how relative sea levels on the North American coast have changed over the last century. In some regions, such as eastern Canada, the rising of the coastline due to Earth's slow rebound from the last ice age has largely offset the sea level rise resulting from global warming. In other regions, such as the Gulf Coast of the United States, this rebound is having the opposite effect and compounding sea level rise.

Hurricane energy and powerfulness have increased in recent times in the United States. It is interesting to note that while damage from storms is increasing--not only due to escalating stomr energy and power, but also because of growing coastal populations and more coastal development--mortality asn't. This is thanks largely to better warning systems and evacuation measures. Still, punishing stomrs have the potential to wreak havoc, especially on property and infrastructure, in many coastal communitites.

This graph compares trends in surface temperature and forest area burned in Canada over the past 100 years. Warming temperatures mean longer fire seasons, larger forest fires, and a heightened threat to human communities and forest ecosystems. A confluence of record-breaking heat, drought, and fuel load has led to unprecendented wildfires in the western U.S. in recent years. Extreme heat and dryness in Eurasia led to an unprecedented outbreak of hundreds of wildfires in Russia during the summer of 2012. The combined record heat and smoke generated smog that led to over 50,000 deaths across Russia. Damages were estimated to exceed U.S. $15 billion.

We saw earlier in this lesson that shifting water resources represent a potential climate change threat. In Europe, for example, both extreme drought and flooding due to intense rainfall are likely to incur damages. More powerful winter storms are likely to impact the economies of both Europe and North America (see, e.g., this news article discussing the impact of especially severe winter storms during 2011 winter on air travel in North American and Europe). 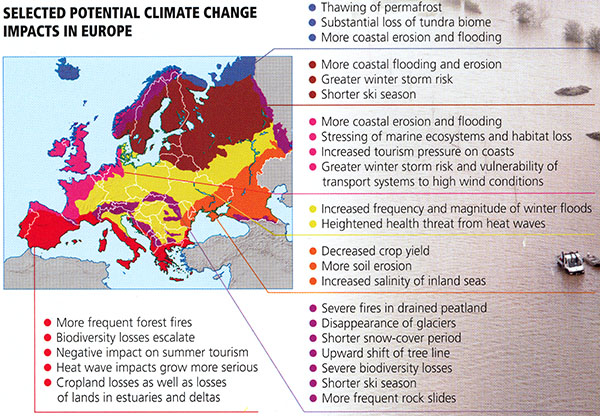