Opponents to action often present the challenges of climate change as if they are the sole concern of "granola-crunching tree huggers". While it may be convenient, from a rhetorical perspective, for climate change deniers to caricature concern over the climate change threat in this manner, it is not very accurate at all. In reality, the national security community—hardly a bunch of environmental extremists—are among the communities most concerned about the potential impacts of projected future climate changes.

We have already seen that climate change could threaten food security, water security and health security. As there has often been the fierce competition for limited resources—be it food, water, land, etc.—it is reasonable to draw the conclusion that climate change may challenge national security. In fact, that is the conclusion of the U.S. Military. You can hear Dr. David Titley (formerly a Rear Admiral, the Navy's official oceanographer, and most recently a Professor of Practice at Penn State University and Director of the Center for Solutions to Weather and Climate Risk) discussing the potential national security threats of projected future climate change in this video:

So I'd like to tell you a story about climate and change, but it's really a story about people and not polar bears. So this is our house that we lived in in the mid-2000s. I was the chief operating officer for the Navy's weather and ocean service. It happened to be down at a place called Stennis Space Center right on the Gulf Coast, so we lived in a little town called Waveland, Mississippi, nice modest house, and as you can see, it's up against a storm surge. Now, if you ever wonder what a 30-foot or nine-meter storm surge does coming up your street, let me show you. Same house. That's me, kind of wondering what's next. But when we say we lost our house -- this is, like, right after Katrina -- so the house is either all the way up there in the railway tracks, or it's somewhere down there in the Gulf of Mexico, and to this day, we really, we lost our house. We don't know where it is.

You know, it's gone. So I don't show this for pity, because in many ways, we were the luckiest people on the Gulf Coast. One of the things is, we had insurance, and that idea of insurance is probably pretty important there. But does this scale up, you know, what happened here? And I think it kind of does, because as you've heard, as the sea levels come up, it takes weaker and weaker storms to do something like this. So let's just step back for a second and kind of look at this. And, you know, climate's really complicated, a lot of moving parts in this, but I kind of put it about it's all about the water. See, see those three blue dots there down on the lower part? The one you can easily see, that's all the water in the world. Those two smaller dots, those are the fresh water. And it turns out that as the climate changes, the distribution of that water is changing very fundamentally. So now we have too much, too little, wrong place, wrong time. It's salty where it should be fresh; it's liquid where it should be frozen; it's wet where it should be dry; and in fact, the very chemistry of the ocean itself is changing. And what that does from a security or a military part is it does three things: it changes the very operating environment that we're working in, it threatens our bases, and then it has geostrategic risks, which sounds kind of fancy and I'll explain what I mean by that in a second.

So let's go to just a couple examples here. And we'll start off with what we all know is of course a political and humanitarian catastrophe that is Syria. And it turns out that climate was one of the causes in a long chain of events. It actually started back in the 1970s. When Assad took control over Syria, he decided he wanted to be self-sufficient in things like wheat and barley. Now, you would like to think that there was somebody in Assad's office that said,

"Hey boss, you know, we're in the eastern Mediterranean, kind of dry here, maybe not the best idea." But I think what happened was, "Boss, you are a smart, powerful and handsome man. We'll get right on it." And they did.

So by the '90s, believe it or not, they were actually self-sufficient in food, but they did it at a great cost. They did it at a cost of their aquifers, they did it at a cost of their surface water. And of course, there are many nonclimate issues that also contributed to Syria. There was the Iraq War, and as you can see by that lower blue line there, over a million refugees come into the cities. And then about a decade ago, there's this tremendous heat wave and drought -- fingerprints all over that show, yes, this is in fact related to the changing climate -- has put another three quarters of a million farmers into those same cities.

Why? Because they had nothing.

They had dust. They had dirt. They had nothing. So now they're in the cities, the Iraqis are in the cities, it's Assad, it's not like he's taking care of his people, and all of a sudden we have just this huge issue here of massive instability and a breeding ground for extremism. And this is why in the security community we call climate change a risk to instability. It accelerates instability here. In plain English, it makes bad places worse.

So let's go to another place here. Now we're going to go 2,000 kilometers, or about 1,200 miles, north of Oslo, only 600 miles from the Pole, and this is arguably the most strategic island you've never heard of. It's a place called Svalbard. It sits astride the sea lanes that the Russian Northern Fleet needs to get out and go into warmer waters. It is also, by virtue of its geography, a place where you can control every single polar orbiting satellite on every orbit. It is the strategic high ground of space.

Climate change has greatly reduced the sea ice around here, greatly increasing human activity, and it's becoming a flashpoint, and in fact the NATO Parliamentary Assembly is going to meet here on Svalbard next month. The Russians are very, very unhappy about that. So if you want to find a flashpoint in the Arctic, look at Svalbard there. Now, in the military, we have known for decades, if not centuries, that the time to prepare, whether it's for a hurricane, a typhoon or strategic changes, is before they hit you, and Admiral Nimitz was right there. That is the time to prepare.

Fortunately, our Secretary of Defense, Secretary Mattis, he understands that as well, and what he understands is that climate is a risk. He has said so in his written responses to Congress, and he says, "As Secretary of Defense, it's my job to manage such risks." It's not only the US military that understands this. Many of our friends and allies in other navies and other militaries have very clear-eyed views about the climate risk. And in fact, in 2014, I was honored to speak for a half-a-day seminar at the International Seapower Symposium to 70 heads of navies about this issue. So Winston Churchill is alleged to have said, I'm not sure if he said anything, but he's alleged to have said that Americans can always be counted upon to do the right thing after exhausting every other possibility.

So I would argue we're still in the process of exhausting every other possibility, but I do think we will prevail. But I need your help. This is my ask. I ask not that you take your recycling out on Wednesday, but that you engage with every business leader, every technology leader, every government leader, and ask them, "Ma'am, sir, what are you doing to stabilize the climate?" It's just that simple. Because when enough people care enough, the politicians, most of whom won't lead on this issue -- but they will be led -- that will change this. Because I can tell you, the ice doesn't care. The ice doesn't care who's in the White House. It doesn't care which party controls your congress. It doesn't care which party controls your parliament. It just melts.

Thank you very much.

You can also find a thorough discussion of the potential national security threats of climate change in this report, The Age of Consequences: The Foreign Policy and National Security Implications of Global Climate Change, published by the Center for Strategic International Studies, and co-authored by leading national security experts including former CIA director James Woolsey.  There is also a documentary of the same name looking at climate change and national security.

One recurring theme in discussions of U.S. national security impacts is the potential military implications of retreating Arctic sea ice. In recent years, the mythical "Northwest Passage" has finally opened up on a semi-regular basis. That is to say, it is now possible, over part of the year, for ships and submarines to travel unimpeded from the Labrador sea through the Arctic ocean, into the Pacific ocean. As the trajectory of sea ice retreat continues and the open channels widen and deepen, it will likely be possible for large military vessels (ships and submarines) to make this route. That would have deep implications for U.S. national security. Suddenly, the U.S. would need to defend a new (Arctic) coast line against potential invasion and military attack. 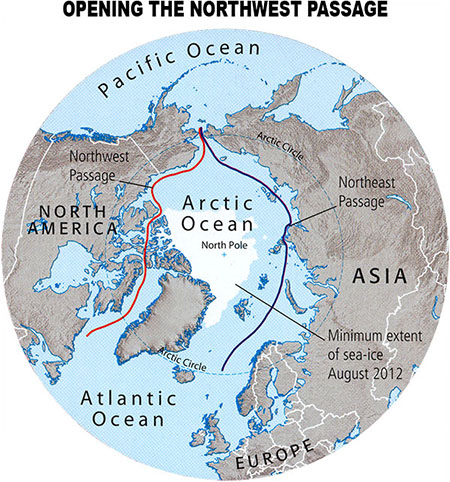 Other scenarios involve the idea that increased conflict between nations and cultures may arise from so-called environmental refugeeism—people fleeing regions no longer fit for habitation for other currently occupied regions, thereby increasing the competition for resources. As parts of Sub-Saharan Africa, such as Senegal, become too dry and inhospitable for subsistence agriculture, for example, there may be a flood of human refugees fleeing this environment to the less arid south, e.g., to Ghana (indeed, there is evidence this is already happening). Another scenario is that the extremely large populations of interior Nigeria, driven by drying conditions, flee for the mega-city of Lagos to the south, where there is heightened competition for food and water resources. Adding to the incendiary mix is the skirmishes that might break out among groups and individuals fighting over the last remains of the disappearing oil reserves of the Niger River Delta, and the cronyism and political corruption that may ensue. Consider also the impact of an increasingly dry Middle East. Author Daniel Hillel has argued in Rivers of Eden that it is the competition for scarce water resources over the years that has driven much of the Middle East conflict. Imagine adding further fuel to the fire as water resources continue to disappear. New York Time's columnist (and Nobel Prize winner in economics) Paul Krugman has argued that climate change-related stresses on food supply may have had a role in recent unrest and uprisings in the region, such as that recently witnessed in Egypt. A more recent article on water supply can be found here.  Could that be a sign of things to come?

The worst-case scenarios that researchers have envisioned are not entirely unlike the dystopian futures portrayed in 1970s and 1980s apocalyptic films such as Soylent Green and Mad Max. 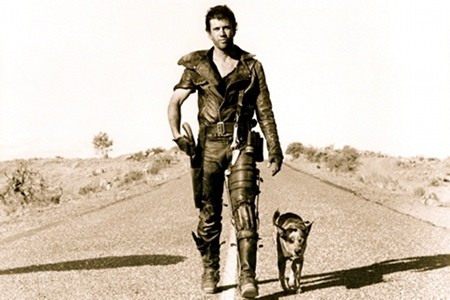