Water is essential to life and it is essential to human civilization. Either too much or too little is a problem. And as we have seen in Lesson 7, climate change may, ironically, give us both.

Figure 9.12: Examples of Flooding (left) and Drought (right).
Credit: Both photos are in the public domain

As atmospheric circulation patterns and storm tracks shift, and changing rainfall patterns combine with the effects of changing evaporation and changing runoff patterns, one thing is for certain—water resources will be impacted. The greatest threat is the uncertainty of increasingly irregular and shifting patterns of precipitation.

In some regions, like the desert southwest of the U.S., climate change threatens to reduce fresh water availability due to both decreased winter rainfall and snowfall that ultimately feeds major reservoirs through spring runoff. Current projections are that Lake Powell, which provides southern Nevada with much of its fresh water supply, may run dry within a matter of decades, extrapolating recent drying trends. These decreases in water supply are on a collision course with demographic trends, as population centers, such as Las Vegas and Phoenix continue to expand in size. Similar scenarios are likely to play out in Southern Europe and the Mediterranean, the Middle East, southern Africa, and parts of Australia.

Other regions, meanwhile, are projected to get too much water. Bangladesh, already threatened by rising sea level, is likely to see increased flooding from the intense rainfalls expected with a warmer, more moisture-laden atmosphere. 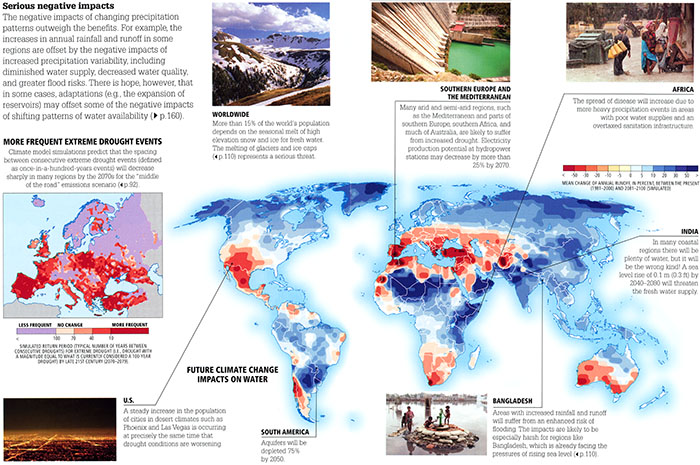