Climate change is likely to challenge global food security, but the situation is complicated. Longer growing seasons in northern latitudes could prove favorable for growing crops, but even moderate warming is likely to lead to substantial decreases in productivity for key cereal crops grown in the tropics—rice, wheat, sorghum, maize. These crops are growing at what is essentially their optimal temperature, and any warming leads to substantial decreases in yield. Added to the mix is the direct impact of the increase in ambient concentrations. There is empirical evidence that the impact of so-called fertilization could also lead to increases in productivity. Plants require for photosynthesis, so, to the extent that is a limiting factor in cereal crop growth, increasing levels might increase productivity. Yet, there are additional factors that might mitigate this effect. As we have seen previously in Lesson 7, large parts of the tropical and subtropical continents are projected to see drying soils as a result of anthropogenic climate change (one exception is central and eastern equatorial Africa—but there is little consensus among models). To take in for the purpose of photosynthesis, plants must maintain open stomata—but at the same time, this increases evapotranspiration, which is a problem as conditions become drier, and water itself becomes a limiting factor. Indeed, any increase in drought stress could easily offset the benefits of longer growing seasons in extratropical regions.

Thus, projecting precisely how agricultural yields will respond to ongoing climate change is quite uncertain, because it requires knowing not only how seasonal temperature patterns will change, but also knowing how regional rainfall and drought patterns will be impacted. This uncertainty notwithstanding, best estimates based on driving theoretical crop models with climate change projections suggest that for 1 to 2°C additional warming we could see modest increases in agricultural productivity in extratropical regions, but substantial decreases in tropical regions. Similar patterns hold for livestock yields, which themselves rely on feedstocks (see the map below). For warming exceeding 3°C, however, we begin to see sharp decreases in global agricultural yields. Some of the limitations of these projections should be kept in mind. Indeed, they may be overly optimistic because they do not account for other potentially detrimental climate change impacts, such as decreased fresh water supply (see the previous section on water resources) for irrigation, or severe weather events, such as the catastrophic Pakistan floods and Russian wild fires last summer, which devastate crops and impair distribution system, and which have been blamed for recent spikes in global food prices. These additional aggravating factors could have devastating consequences for agriculture (see, e.g., this article in The Economist). 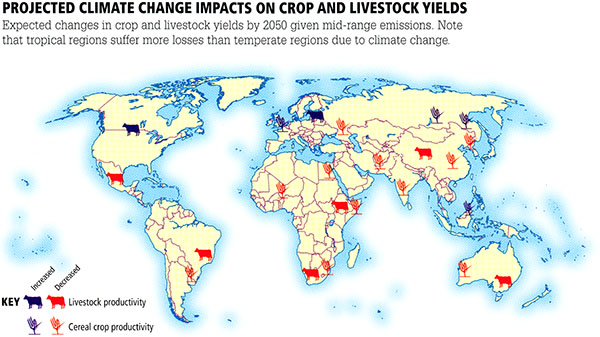 In our next lesson on adaptation to climate change, you will investigate these impacts in detail in the context of possible adaptive strategies for mitigating the impacts. For now, we will neglect the prospects for adaptation and simply focus on the projected impacts of climate change on agriculture. To be precise, we will focus on three key cereal crops: wheat, rice, and corn/maize. The impacts are taken from the results of theoretical crop models driven by global warming projections. One limitation that should be kept in mind is that the crop model predictions do not account for other potentially important factors, such as decreased precipitation and fresh water supply. That having been said, such models provide, at the very least, some basic framework for assessing specific potential climate change impacts—as we will see in the next lesson, they can also inform the process of climate change adaptation.

Play around with the interactive application below, and investigate the impacts on the various cereal crops for different amounts of future projected warming, for both tropical and extratropical regions. Be prepared to discuss your findings in next week's discussion. This analysis will be useful to you in advance of our next project, in which we will use a similar interactive application to investigate possible adaptation measures for mitigating climate change impacts on agricultural productivity.