As we alluded to earlier in the course, climate change is projected to lead to a poleward expansion of the Hadley Cell circulation pattern, which results in an expansion of the zone of subsiding, dry air well out of the subtropics into middle latitudes. This is particularly true in the summer when the ITCZ, jet stream, and polar front shift furthest poleward. As a result, we see decreased rainfall over the large parts of the subtropics through the mid-latitudes, including large parts of North America and Europe. Rainfall increases in the deep tropics where more water vapor is available to be squeezed out of the air and turned into rainfall as it rises within the ITCZ, which migrates north and south of the equator over the course of the year. Large rainfall increases are also seen in sub-polar latitudes owing to a combination of (a) the poleward shift of the jet stream and polar front, bringing this secondary band of rising atmospheric motion further toward the pole and (b) the effect of increased atmospheric moisture, meaning that where it rains, there will be more of it.

Figure 7.4a: Model Projections of Precipitation Changes by end of 21st Century in RCP 2.6 (left) and RCP 8.5 (right) emissions scenarios (based on average overall IPCC models). Stippling indicates where there is a consensus among models.
Credit: IPCC, 2013. (See also Figures 4.13 and 4.24 in Chapter 4 of IPCC AR6 for similar, more up-to-date information in the context of SSPs.) 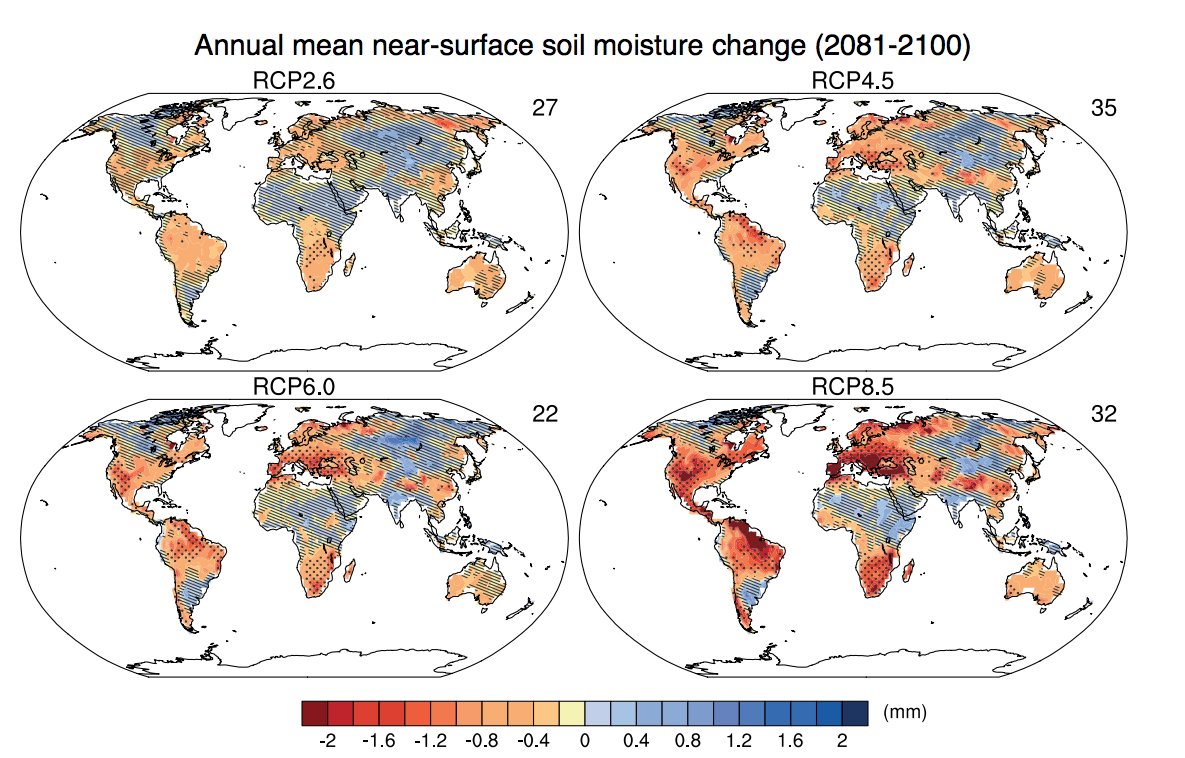 Figure 7.4b: Model Projections of Soil Moisture Changes by end of 21st Century in the RCP 2.6, RCP 4.5, RCP 6.0, and RCP 8.5 emission scenarios (based on average over all IPCC models). Stippling indicates where there is a consensus among models.
Credit: IPCC, 2013

In fact, there is no paradox here at all. Keep in mind that soil moisture reflects a balance between the water coming in (in the form of precipitation, and runoff) and the water leaving the soil (in the form of evaporation/evapotranspiration). Evaporation is projected to increase over most of the continents, including many regions that are projected to see an increase in precipitation. So, what is actually happening is that even in many areas where rainfall is increasing, soil moisture nonetheless is projected to decrease, and drought thereby worsen, because warmer soils are evaporating water into the atmosphere at a faster rate than water is accumulating at the surface from rainfall or snowfall, even when precipitation is projected to increase. As we will see later, a further complication is the distribution of the rainfall—it is projected to come in fewer, but heavier rainfall events—which, seemingly paradoxically, means that both flooding and drought can become problematic for the very same regions. We will discuss this issue later in our treatment of climate change impacts.