We know that the ENSO phenomenon has a profound influence on climate on inter-annual timescales, leading to substantial regional alterations in temperature and rainfall patterns around the world, and influencing important phenomena, such as Atlantic hurricane activity. Needless to say, one key question of climate change is how the characteristics of ENSO might change in the future. 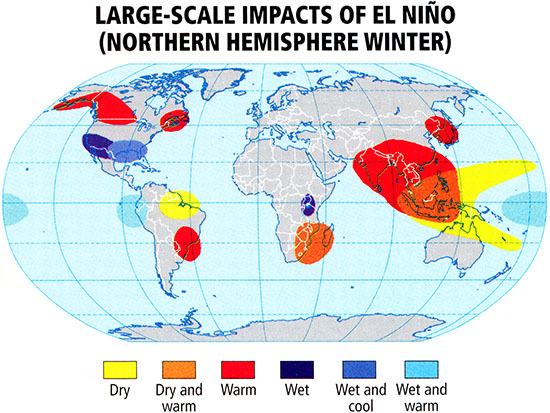 One of the great limitations in projecting future regional climate change is that we cannot yet confidently assess how ENSO will change in the future. The state-of-the-art models used in the most recent IPCC assessment do not show any clear consensus regarding how anthropogenic climate change will influence the characteristics of ENSO.

Most models (the models that fall in the right half of the plot below) project an overall more El Niño-like climate, that is to say, a weakened Walker Circulation, weakened trade winds and oceanic upwelling in the eastern and central tropical Pacific, and a surface temperature pattern wherein the eastern equatorial Pacific warms up more than the central and western equatorial Pacific ocean. However, a few state-of-the-art climate models (i.e., the three that fall in the left hand of the plot below) project the opposite, a more La Niña-like pattern. One might be tempted to go with the majority, the El Niño-trending models. However, paleoclimate evidence of the response of ENSO to past natural changes in radiative forcing suggests the possibility that the minority of models (i.e., the La Niña-trending models) might be right. This issue has implications for how anthropogenic climate change might influence Atlantic hurricane activity. We will discuss climate change influences on tropical cyclone activity in more detail in our next lesson.

There is even greater uncertainty regarding the amplitude of ENSO variability, i.e., whether individual El Niño and La Niña events will become larger (models that fall in the upper half of the plot below) or smaller (models that fall in the lower half), with an equal split between the IPCC models with regard to which of the two possiblities is more likely. Since larger El Niño events have a greater impact on regional weather patterns, while smaller events have a lesser impact, this issue has significant implications for projected climate change impacts.

The large uncertainties in projecting changes in ENSO likely result from a combination of factors, including the tendency for state-of-the-art climate models to produce an unrealistic split ITCZ in the eastern tropical Pacific, which biases the strength of the trade winds and equatorial upwelling; the still course resolution of the oceanic component of the models, which may lead to inaccuracies in the ocean wave disturbances that are important for El Niño and La Niña; and uncertainties in the behavior of marine stratocumulus clouds, which play an important role in equatorial Pacific radiation and heat budget.