Possible agricultural adaptations include changing crop locations; for example, seeking out higher elevation environments and cooler micro-climates. Adaptations also include changing crop rotation patterns and tilling methods; for example, so-called no-till agriculture keeps sub-surface soils cooler and wetter, which might mitigate the effects of warmer and dryer conditions. One can switch to crop varieties (or cultivars) that are better adapted to the changing weather patterns and climate or amend planting schedules to adapt to shifting seasonal temperature and rainfall patterns. And perhaps as the final line of retreat in the adaptation process, one can change the choice of crops grown, for example, replacing wheat with sorghum as conditions become increasingly arid.

Let us consider the potential mitigation of losses (or maybe even gains) that might come from employing these agricultural adaptations. Let us make the simplifying, if perhaps overly optimistic, assumption of optimal adaptation. That is to say, let us assume that stakeholders operate with perfect information and take the most favorable possible adaptive measures in response to changing climate conditions. Under that assumption, things do not appear too bad, at least for moderate future warming.

Let us consider the predictions for varying levels of future warming and associated CO2 increase (note that there is a direct impact of CO2 fertilization in addition to the indirect climate change impacts from increasing CO2). For 1-2°C warming, we can expect to see increased yields across crops in the extra-tropics, due, in large part, to longer growing seasons, and, with appropriate adaptations, the agricultural productivity could be enhanced even more, approaching 10% for rice and corn and 20% for wheat. For that same amount of warming in the tropics, however, cereal crop productivity either remains the same (rice) or declines (wheat and corn). However, appropriate adaptations can change the picture, turning declines into modest gains. On the global scale for the modest 1-2°C warming, agricultural productivity increases, largely due to the gains in the extra-tropics. However, even at this moderate level of warming, we begin to see the challenges of the regional asymmetry in agricultural productivity responses — the gains are primarily in the regions that are already able to meet food requirements (i.e., the developed world of the extra-tropics), and not in the regions faced by shortfalls owing to their lesser wealth and growing population (i.e., the developing world of the tropics). As warming increases beyond 3°C, this disparity becomes even greater, as low-latitude regions are likely to see agricultural productivity declines regardless of what adaptive measures are taken. For warming beyond 3°C, global agricultural yields decline even with adaptation, and global food prices show substantial increases. As warming approaches 5°C, losses are seen in the extra-tropics as well as in the tropical regions, regardless of the adaptive measures, and global agricultural productivity losses and food price increases become substantial. 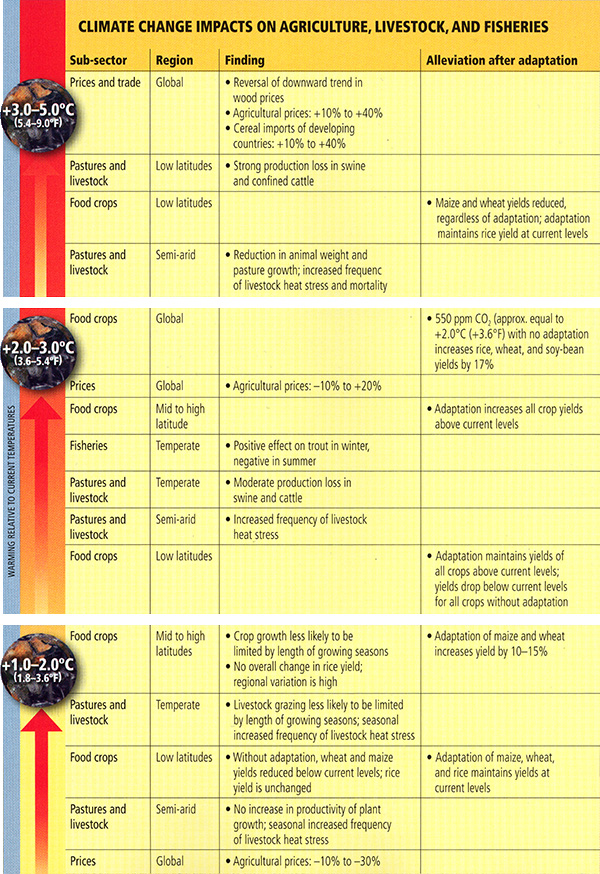 Now, you will investigate these relationships in detail yourself, interactively, using a more elaborate version of the agriculture application you encountered in our previous lesson. The application now indicates changes in yields of major cereal crops (wheat, rice, and corn) both with and without adaptive measures. Please take some time to explore the agricultural application below. You will be using this tool in Project 2, which begins this week.