Part 2b: Degassing of Lakagígar

We can use the same approach to calculate the mass of SO2 released from the lava during the Lakagígar eruption. First, we need to estimate the mass of SO2 dissolved in the magma prior to eruption. But how does one determine the concentration of a volatile component prior to degassing, when all the lava and tephra samples we have are already degassed? The answer lies in tiny bits of glass trapped inside of crystals. We call these bits of glass melt inclusions, because they represent the magma that was present at the time the crystals formed. Once a melt inclusion has been overgrown by a crystal, the volatiles are trapped inside and cannot escape*.

The concentration of sulfur measured in melt inclusions from Lakagígar ranges from ~1200 to 1800 parts per million (ppm). We can use the best estimate of 1675 ppm from Thordarson et al., 1996. In order to convert this concentration into an equivalent mass of S, we need to multiply by the total mass of lava erupted. We can assume a best estimate of 15 km3 of lava erupted.

*In detail this is not entirely true – volatiles can still diffuse out through the solid crystals at high temperatures – but for the purposes of our calculations we can assume that they remain perfectly entrapped. 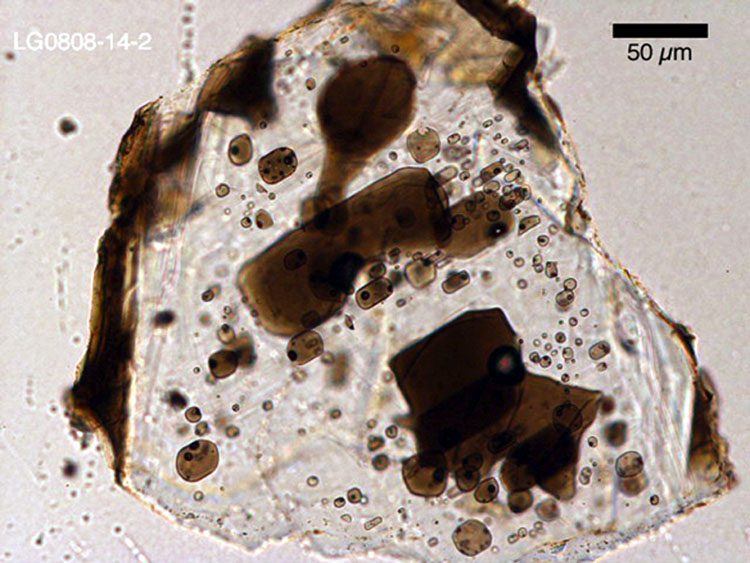 Melt inclusions in a plagioclase crystal from a phreatomagmatic event at Lakagígar. Volatile elements, including sulfur, remain trapped inside the crystal even after eruption and cooling, allowing us to determine the pre-eruptive volatile content of the magma.
Credit: Photomicrograph by M. Feineman

1. Assuming a basalt density of 2750 kg/m3, what is the total mass of lava erupted in megatons (109 kg)? Watch your units! Not only do you need to convert kilograms to megatons, but you also need to convert cubic kilometers to cubic meters.

Now multiply the mass of lava you just calculated by 1675/106 to get the mass of sulfur in the magma prior to degassing.

2. What is the total mass of sulfur before degassing?

Now, just as with the CO2 in Coke experiment, you will also need to estimate the mass of sulfur after degassing, which is determined by measuring the concentration of sulfur in the degassed tephra and lava. The best estimate given by Thordarson et al. is 205 ppm.

3. Using the same total mass of lava you used above, calculate the mass of sulfur remaining after degassing.

The difference between these two masses is the mass of sulfur released to the atmosphere.

4. What is the total mass of sulfur released to the atmosphere (in megatons)?

One last thing. The sulfur released to the atmosphere is not pure elemental sulfur, it is mostly in the form of SO2 gas. In order to convert the mass of S into the equivalent mass of SO2, you will need to multiply by the mass ratio of SO2 to S. You can use any periodic table (I like WebElements) to calculate the molar mass of SO2. Then simply divide this by the molar mass of S, and you have the mass ratio. Multiply by the total mass of sulfur released, and you’re done!

5. What is the total mass of SO2 released to the atmosphere (in megatons)?

6. Thordarson et al. calculated 122.1 megatons of SO2 released. How close did your calculation come to theirs?

‹ Part 2a: Degassing Calculations up Summary and Final Tasks ›