Myth: When a volcano erupts, that means lava is coming out of it.

Fact: The statement above is misleading because it is true some of the time but not all of the time. One absolute fact is that lava is never the only product of eruption. And, some eruptions involve no lava at all. There can be a great variety of material ejected from a volcano during an eruption; the most likely ones in addition to lava are ash and gas.

Volcanic products at Kilauea (and some other volcanoes, too)

The discussion below won't be an exhaustive list, but it will give you an idea of the variety of volcanic emissions routinely monitored, collected, and studied by volcanologists. Let's break it down into liquids, gases, and solids because those classifications are easy to grasp, and you will see all of these later on when you work on the problem set concerning volcano monitoring at Kilauea. I have constructed this discussion to use Kilauea's products as the main example. 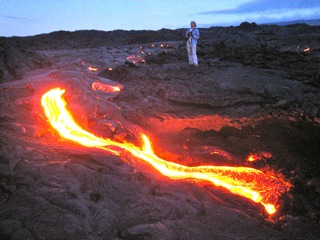 The typical cartoon-style drawing of a volcano is of a mountain with orange lava running down the sides of it. In fact, this mental image isn't really wrong, but it only works for certain types of volcanoes. Lava is the catch-all term for molten rock that extrudes from the Earth and cools at the surface. It can vary in temperature, viscosity, and mineralogic composition depending on the tectonic regime of the particular volcano. Different classifications are given to lavas based on their texture, which tells us about the cooling history of the rock and the amount of silica they contain (which, as you'll recall from the previous lesson, is the primary distinction between different lavas mineralogically).

Ninety-nine percent of the gas molecules emitted during a volcanic eruption at Kilauea volcano are water vapor (H2O), carbon dioxide (CO2), and sulfur dioxide (SO2). The remaining one percent is made up of hydrogen sulfide (H2S), carbon monoxide (CO), hydrogen chloride (HCl), hydrogen fluoride (HF), and a few others. At Kilauea, gas is monitored daily by scientists who go out and collect the data. The way they do it is to attach an ultraviolet spectrometer to the side of a vehicle and then they drive the vehicle back and forth under the plume. The main thing they are interested in is sulfur dioxide because that gas is really the most noxious. It is the main contributor to "vog" (volcanic smog), it can produce acid rain, and too much exposure to sulfur dioxide has been known to aggravate pre-existing respiratory conditions, such as asthma.

Can an eruption be only gas with no lava at all? Yes, in August 1986, a sudden outgassing of CO2 from Lake Nyos in Cameroon, killed over 1,500 people and hundreds of animals in the valleys surrounding the lake. Lake Nyos is a lake that formed in the caldera of a volcano. If you have seen Crater Lake in Oregon, that is also a lake that filled a collapsed caldera. As CO2 was emitted from Lake Nyos, it flowed down the sides of the mountain, displacing the normal air because CO2 is heavier than regular air, which is mostly nitrogen, N2, with some oxygen, O2, thrown in. (Recall from basic chemistry that CO2 has an atomic weight of 6+8+8 = 22, whereas N2 has an atomic weight of 7+7=14 and O2has an atomic weight of 8+8=16). Carbon dioxide is not poisonous, but if you are breathing it instead of air, you will suffocate quickly. The effect of this outgassing was to quietly put out all the cooking fires and suffocate all the people and animals in the valleys around the mountain. Scientists have disagreed about the exact cause of the sudden eruption of CO2. One camp believes that there was a lot of CO2 dissolved in the bottom water of the lake, and something triggered a sudden overturning of the lake's water, bringing the CO2 to the surface. Others hypothesize that the CO2 was a volcanic outgassing from the seemingly dormant caldera. At present there are efforts underway to keep the bottom of the lake free of too much CO2 in case the first explanation is correct. In your reading assignment below, you will read a paper in which a team tries to use witness testimony from survivors to figure out which explanation is correct. 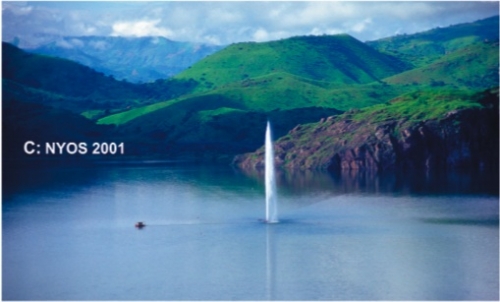 This article is located in our Canvas space:

This article is another good example of a multidisciplinary collaboration. The three authors are a volcanologist, an anthropologist, and a Peace Corps worker. They collaborated to piece together interviews from survivors and witnesses of the CO2 eruption at Lake Nyos that killed over 1,500 people in the valleys surrounding the lake. This effort involved translation and also geologic interpretation of the accounts of the interviewees to get a better idea about what happened at Lake Nyos and whether this could happen again.

As you read, contemplate the following questions:

The solids that come out of Kilauea are mineralogically identical to the lava because it's all coming from the same place, made of the same stuff. However, volcanologists differentiate between molten rock that flowed out --lava-- and solid rock that was thrown out, or cooled as it flew through the air, called tephra. You don't have to be an eyewitness to the eruption to tell the difference between what came out as a solid and what came out as a liquid. You can tell by looking at the texture of the rock after it has cooled. For example, a specific class of tephra, called reticulite, is basically the basaltic version of pumice. You can tell it was thrown out in a high-speed froth because it cooled while trapping the evidence of gas bubbles within it. See photo below. 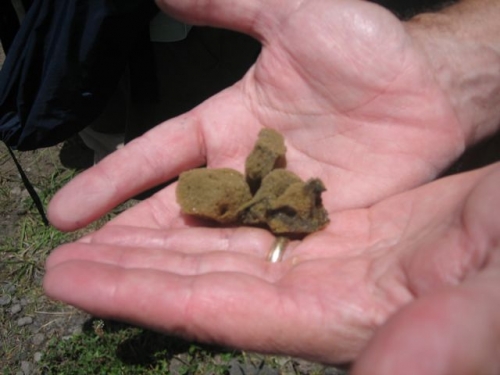 Reticulite (photo above) looks like a sponge and at the sample size above feels nearly weightless in your hand. Does it float like pumice does?

In fact, reticulite does not float the way pumice usually does. The reason pumice floats is that its structure is full of mostly unconnected void spaces. The "unconnected" part is the key. If the water can't get into the void space very easily, it can't saturate the rock and the rock won't sink.

Reticulite has such an open structure that water easily permeates the rock, so it will sink.

Volcanic products at other volcanoes

The proportion of solids, liquids, and gases that volcanoes emit depends on mineralogy and the plumbing system. Mineralogy can generally be tied to the tectonic setting of the volcano. In your problem set you will have a chance to compare the products of a variety of volcanoes and discuss these products in terms of tectonic regime. In addition to the general "Kilauea-specific products" discussed above, here is a mostly non-Kilauea volcanic product to know:

Ash and other pyroclastic items

Myth: Volcanic ash is just like the ash that comes from burning wood or paper, except there's more of it.

Fact: Unlike the soft, pulpy, dissolvable ash that fires produce, volcanic ash is solid rock. Volcanic ash fragments can be quite tiny. That's why they can be dispersed a great distance (thousands of kilometers!) through the air and look just like a regular cloud.

Note the jagged morphology in the photomicrograph of an ash particle from the 1980 Mt. St. Helens eruption. You can also observe the evidence of what were once gas bubbles trapped in the rock.

Volcanic ash is formed when volcanoes erupt explosively. When volatiles, such as water vapor or carbon dioxide, are trapped in magma, they want to bubble out and escape. If the lava is too viscous for the bubbles to rise to the surface and escape, the gas pressure inside the magma builds up until the gas bubbles explode, sending magma shrapnel out of the volcano, flying through the air as it cools into tiny ash fragments. During an eruption, as the magma is explosively ejected, pressure is decreased on deeper magma, causing it to quickly rise and follow the same explosive path. Other pyroclastic materials that erupt from volcanoes include blocks (big ones—these can be house-sized), bombs (medium ones—these can be football-sized), and lapilli (small ones—these are pebble-sized). These items are basically classified by size. Given their particle sizes, they don't stay airborne or travel particularly long distances from the immediate area of the volcano. Below is a recent (2009) photo of Redoubt volcano. Note the height of the ash cloud rising from the volcano and think about the fact that although it looks just like a nice puffy cloud, it is actually composed of nasty sharp little pieces of solid rock. 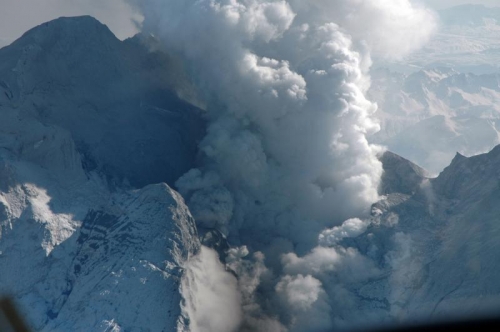 Photo of Redoubt volcano taken on 4 April 2009. The view is north into the summit crater where recent eruptions have removed a significant portion of the glacial ice. A remnant shelf of ice remains on the west (right) side of crater, and in this view, fumaroles are rising from near the ice/wall-rock contact.
Photo by A. Payne of the Alaska Volcano Observatory / University of Alaska Fairbanks, Geophysical Institute.
‹ How to Melt a Rock up How Big is Big? (Volcanoes) ›
EARTH 520: Plate Tectonics and People