1.6 Types of Feedbacks and Their Effects

1.6 Types of Feedbacks and Their Effects

Imagine that you have some money in your bank account. The more money you have, the more interest you earn annually. That interest is added to your account balance, which earns you even more interest. So we can definitely see how A affects B, and B affects A in this case:

As the two positive couplings act in circles within this loop, your account balance keeps growing. Such a feedback loop is called positive or reinforcing (here is the “+” sign in the loop), because the system sort of feeds itself continuously, amplifying the impacts over time. In the beginning, the growth may seem slow, but year after year, it goes faster and faster (see typical growth in savings in Figure 1.12). The more money is there, the more is added. This kind of growth is called exponential in mathematical terms (and there is an equation to describe this curve as a function of time). 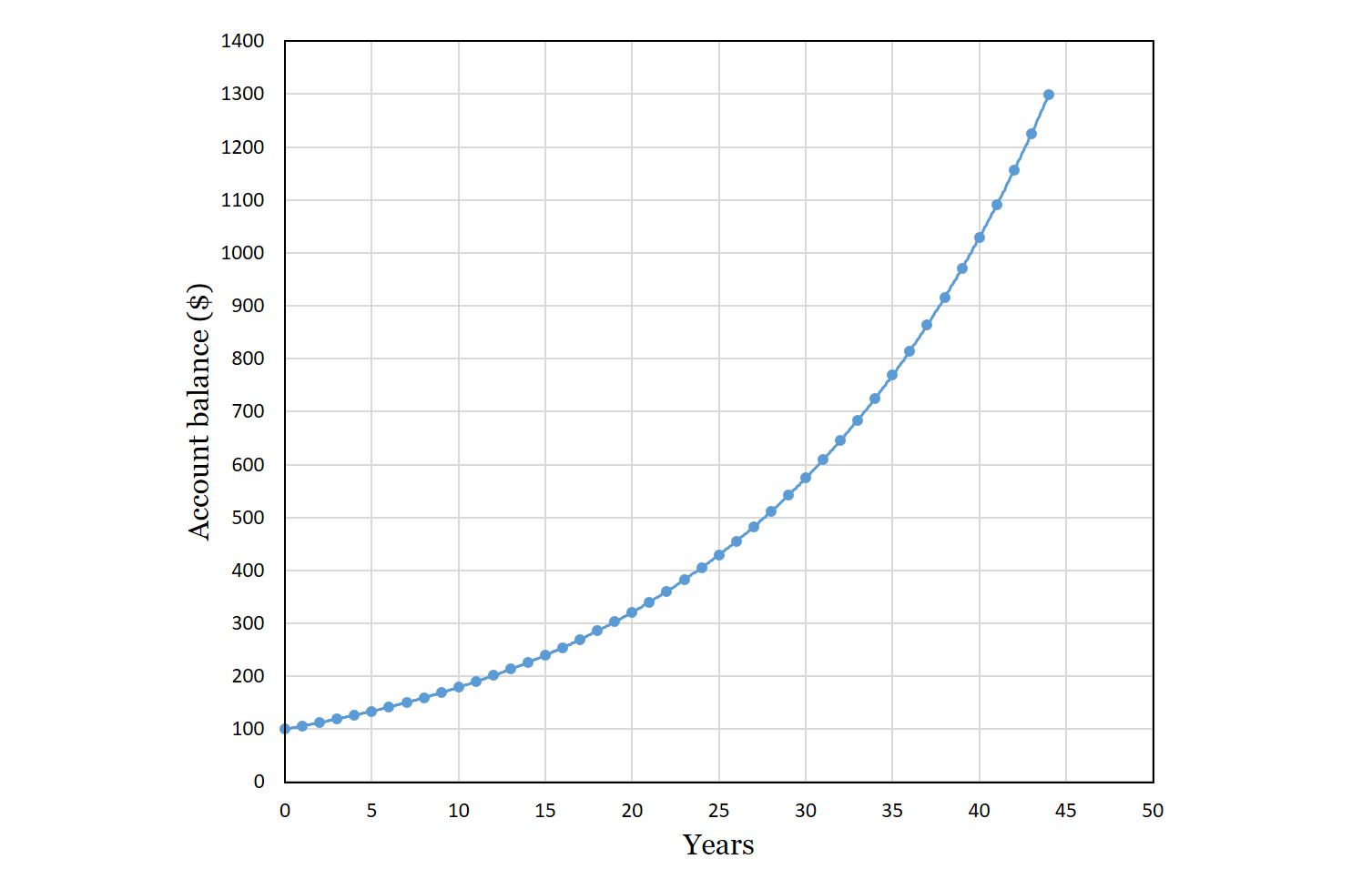 Evidently, exponential growth can be a good thing or a bad thing, depending on what stock is growing. Here are some other examples of growth stimulated by positive feedbacks:

Now think and add a couple of examples to the list. Can you draw a system diagram for any of these examples?

In the context of sustainability, positive feedbacks are classic de-stabilizers, often catering to short term gains. Although called “positive”, ironically, these feedbacks can be responsible for “runaway” and “snowballing” effects throwing system out of balance and often leading to crisis, especially when system growth starts to push against system boundaries.

We can still clearly see here how the result of the first positive coupling affects the initial stock. Such a feedback loop is called negative or balancing feedback (here is the “—“ sign inside the loop), because it does not allow the deer population to grow out of control. Of course, it is a simplified example, and in reality, there may be other ways of regulating the deer population (e.g. hunting) and minimizing collisions (e.g. fences, driver alerts).

Negative feedbacks are mechanisms of stability. They work both ways, not allowing the stock to go too low or too high. These feedbacks are very common in the natural world, where many systems are homeostatic. Some more examples:

Now think and add a couple of examples to the list. Can you draw a system diagram for any of these examples?

When considering system resilience - the ability to bounce back from disturbances – look for negative feedback loops. Negative feedbacks are also culprits of resistance to change. Sometimes, changing undesirable existing practices is difficult because of feedbacks acting within the system.

This rule becomes especially useful when you analyze the feedback loops consisting of multiple couplings. Let us check out a couple of examples.

Examples of how feedbacks work in systems

Here we will consider the connections between four natural elements: solar energy absorbed by the Earth, atmospheric temperature, polar ice, and Earth albedo (reflective ability) (Figure 1.14). Polar ice caps play an important role in controlling the amount of solar radiation obtained by the Earth. Due to the high reflective ability of ice, overall Earth’s albedo increases with the expansion of polar ice and decreases when ice melts. Here is the positive coupling between polar ice and albedo. When albedo is high, a large fraction of solar radiation is reflected back to space and is not absorbed by the Earth. Therefore, we can draw a negative coupling arrow from albedo to solar energy absorbed by the Earth’s surface. Next, we will establish the positive coupling between the solar absorption and surface temperature. The more energy is absorbed by the earth’s surface, the more heat will be emitted off the ground into the atmosphere, thus raising the atmospheric air temperature. Finally, higher global air temperature will result in a decline in polar caps by causing ice to melt – hence the negative coupling arrow to close the loop of connections. We have a feedback in the system!

What does it mean, and what development can we expect from this system?

As we previously learned, positive feedbacks are destabilizing forces, which often lead to the accelerated shift of system from its current state. Indeed, the currently observed rise in global atmospheric temperature (global warming) is responsible for shrinking the polar ice caps. The fast decline in polar ice is observed in both poles and Greenland. This change gradually decreases the Earth’s albedo, and that makes the planetary surface absorb more solar radiation, thus pushing the atmospheric temperature further up. That secondary warming causes more ice melting etc. The more this process continues, the more warming is intensified, and the faster ice melts.

There is strong scientific evidence that the cause of the currently observed global temperature rise is anthropogenic CO2 emissions. And albedo feedback is an additional amplifier that can act fast and push the warming to much higher rates than CO2 alone.

This positive feedback can work in reverse as well. In the history of the Earth, the albedo feedback played a big role in establishing the “ice ages” on Earth, which were accompanied by very fast expansion of glaciers (polar caps) towards the continents.

This example presents a much smaller system that is a very typical example of ecosystem reaching its carrying capacity. Imagine a small pond with a certain population of fish in it. To survive, the fish needs some food and oxygen in the water. The stock of fish is regulated by the factors such as reproduction rate and death rate. Let us identify some key couplings:

We can depict these relationships in the system notation as follows:

Let us add it to the diagram: 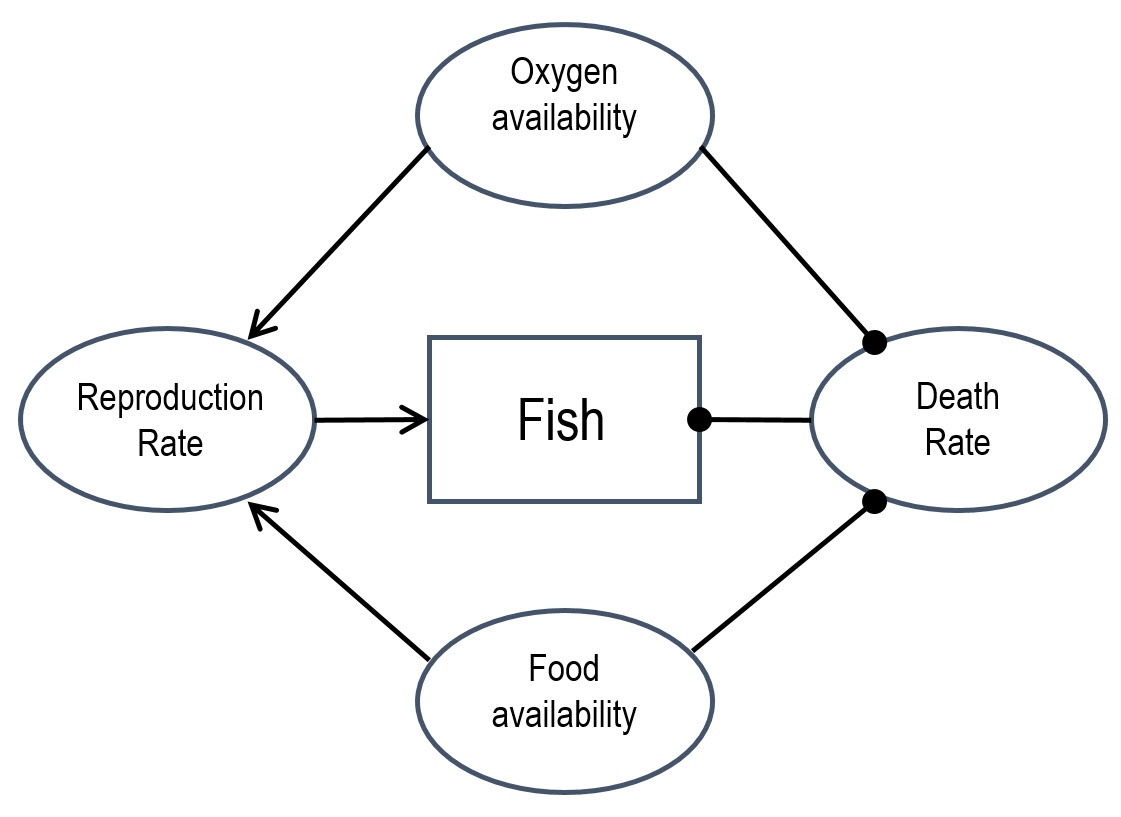 There are a couple more important arrows to add:

Putting these final two connections onto the diagram, we obtain: 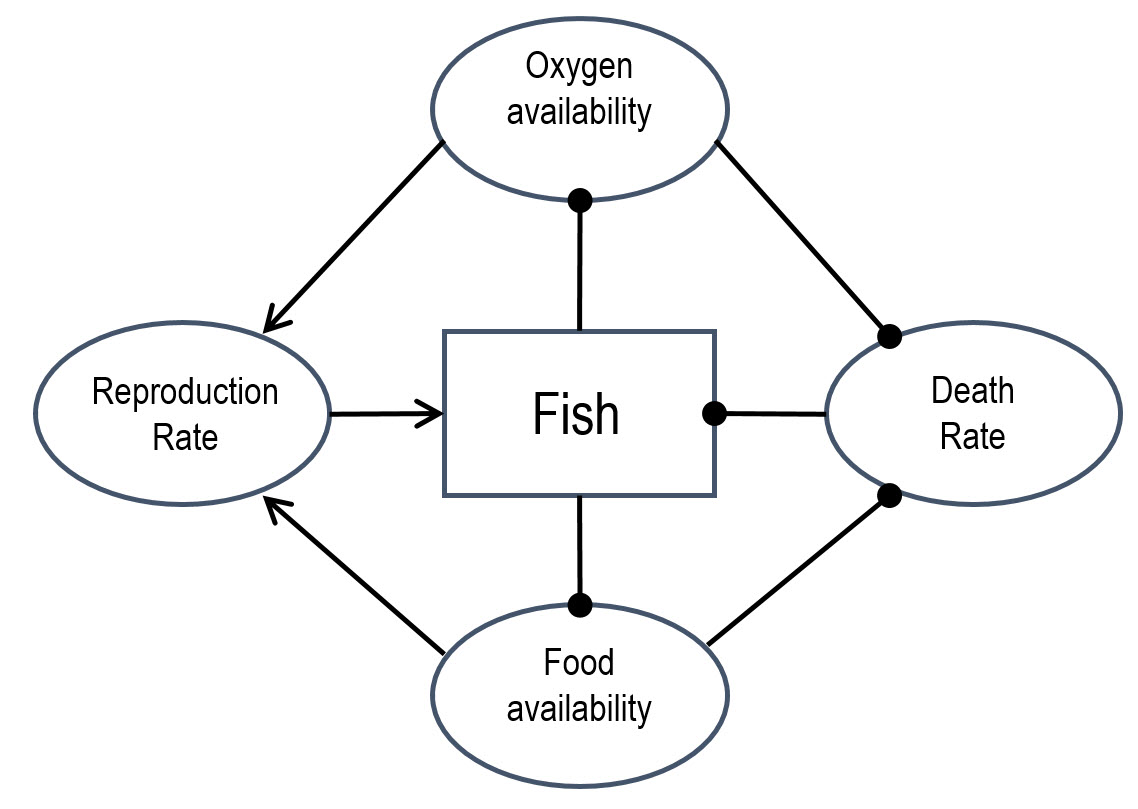 Now let us identify the feedbacks. Are there any closed loops in the diagram? To have a complete feedback, we must be able to trace the couplings in one direction.

Now let us determine whether each feedback is negative or positive using the rule of thumb explained in the previous sections. For example, for the upper left loop, starting with Fish, we have:

We can do the same to identify the other three loops in the diagram: 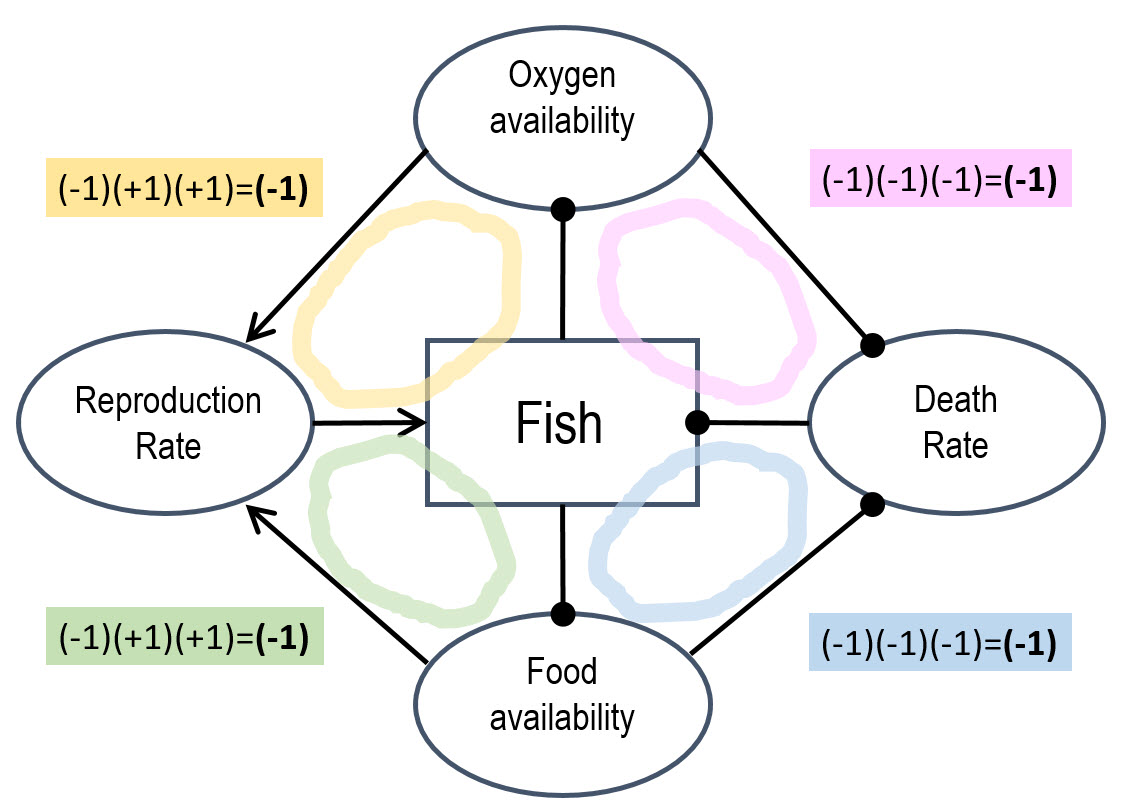 This system appears to be full of negative feedbacks, and that is quite common for natural ecosystems. There are many regulating factors that keep the population of biological species in check. Once the system starts growing out of its capacity limits (food, oxygen supply), the feedbacks start dialing the numbers down until the optimum state (homeostasis) is restored. This example is a demonstration of how negative feedbacks tend to maintain the stability of the system at a certain level. Here we have as many as four mechanisms that help the system execute this goal.

The beauty and power of the system approach is that it can help explore inter-domain connections. Many systems currently exist at the interface of the natural and technological worlds and hence can include factors of economic, social, and environmental nature.

Many causal connections in the environmental systems are sort of predetermined and dependent on the laws of nature. For instance, if temperature increases, gas solubility in water decreases. If a ton of coal is burned, a certain amount of heat is released. If the ocean becomes more acidic, carbonate shells do not form. Those things are just physics and chemistry – there is no intelligent ruling behind them. However, causal connections may be different in human systems, because very often humans have a choice: to turn left or right; to approve or reject a policy; to invest or not to invest; to start the war or negotiation. Those decisions can make an impact within the system, but it does not mean they control the system. In fact, some intelligent (or dumb) decisions can very much be a product of system behavior. In other words, people may take decisions without realizing that they are being controlled by the system itself!

We mentioned before that one of the important system’s properties is function or purpose. The word purpose is more linked to human thinking, so systems can be created to fulfill a particular purpose. The word function is more typical for non-human systems, and function is often visible from the system’s behavior. Please note that human decisions can be made with a purpose in mind, but that purpose in the mind of an individual (perceived or apparent purpose) does not necessarily coincide with the purpose of the system (actual purpose). This is an important distinction. Here are some examples of such dual-purpose dilemma:

Understanding the system behavior can actually help us make smart decisions and steer the system purpose in the desired direction, even those decisions are not always intuitive.

There are a number of environmental factors that sustain the purpose of the honey beehive. It needs a specific habitat with natural flora that provides bees with sources of nectar, clean air and water, which sustain vegetation. Human activities, such as agriculture using pesticides, industrial development, and water and air pollution can be highly disruptive to honey bee populations. We will try to put those factors onto the system diagram (Figure 1.16).

You can identify the positive feedback in this system, which is responsible for ecosystem growth under healthy environmental conditions, with bees and plants mutually benefitting each other. The anthropogenic (human activity) factors, shown by shaded circles, are negatively coupled with different factors in the system. We know that when a positive feedback exists in the system, it can work both ways. A drastic decrease in any of the factors in the loop can result in a fast decline of the entire system. 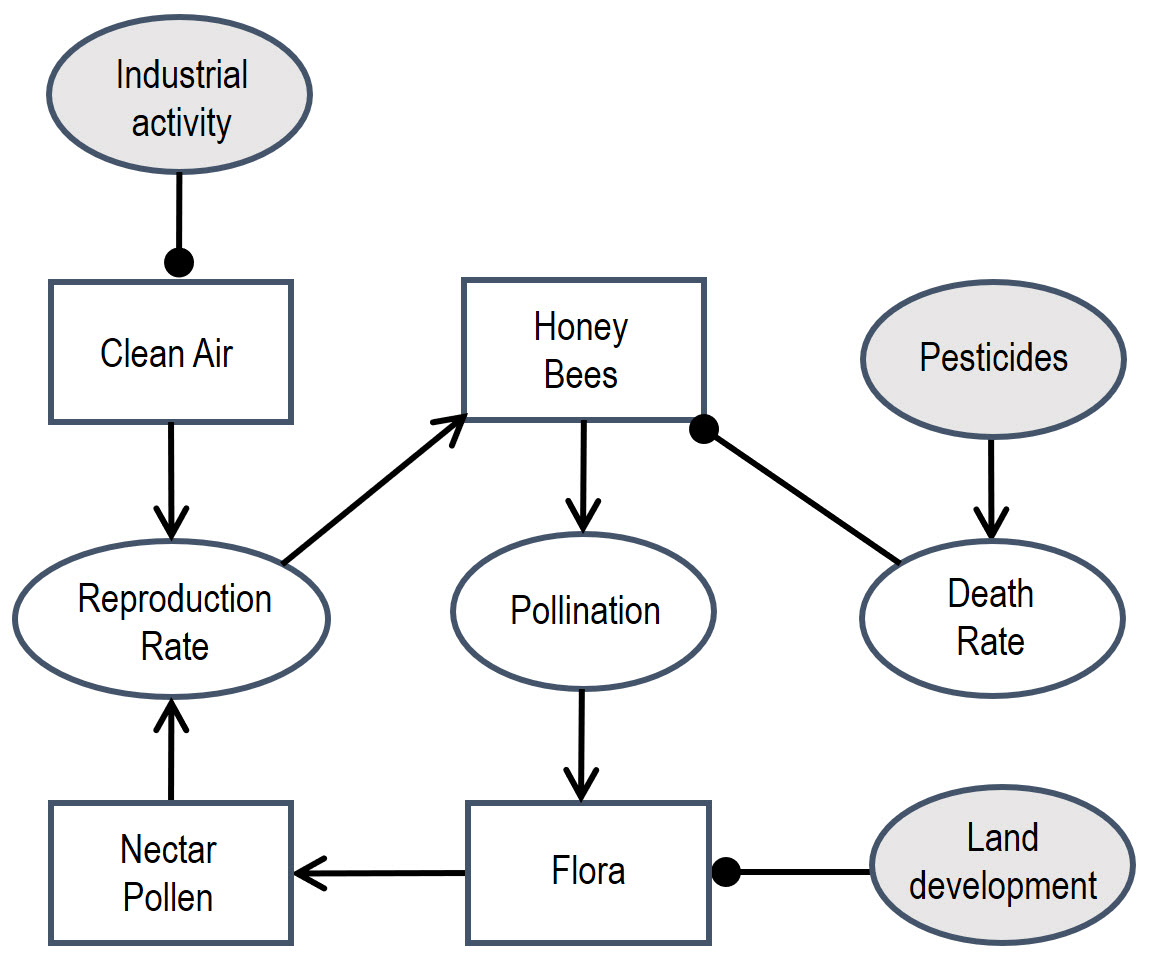 Human decisions can interfere. For example, a decline in the main stock – honey bee population - below a certain critical level can be an alarm signal for the local conservation agencies, who can work with policy makers to protect the natural habitat and resources from excessive exploitation or pollution. That additional factor, when introduced to the system, creates several negative feedback loops that forcefully regulate the industrial factors and keep the system in balance (Figure 1.17). 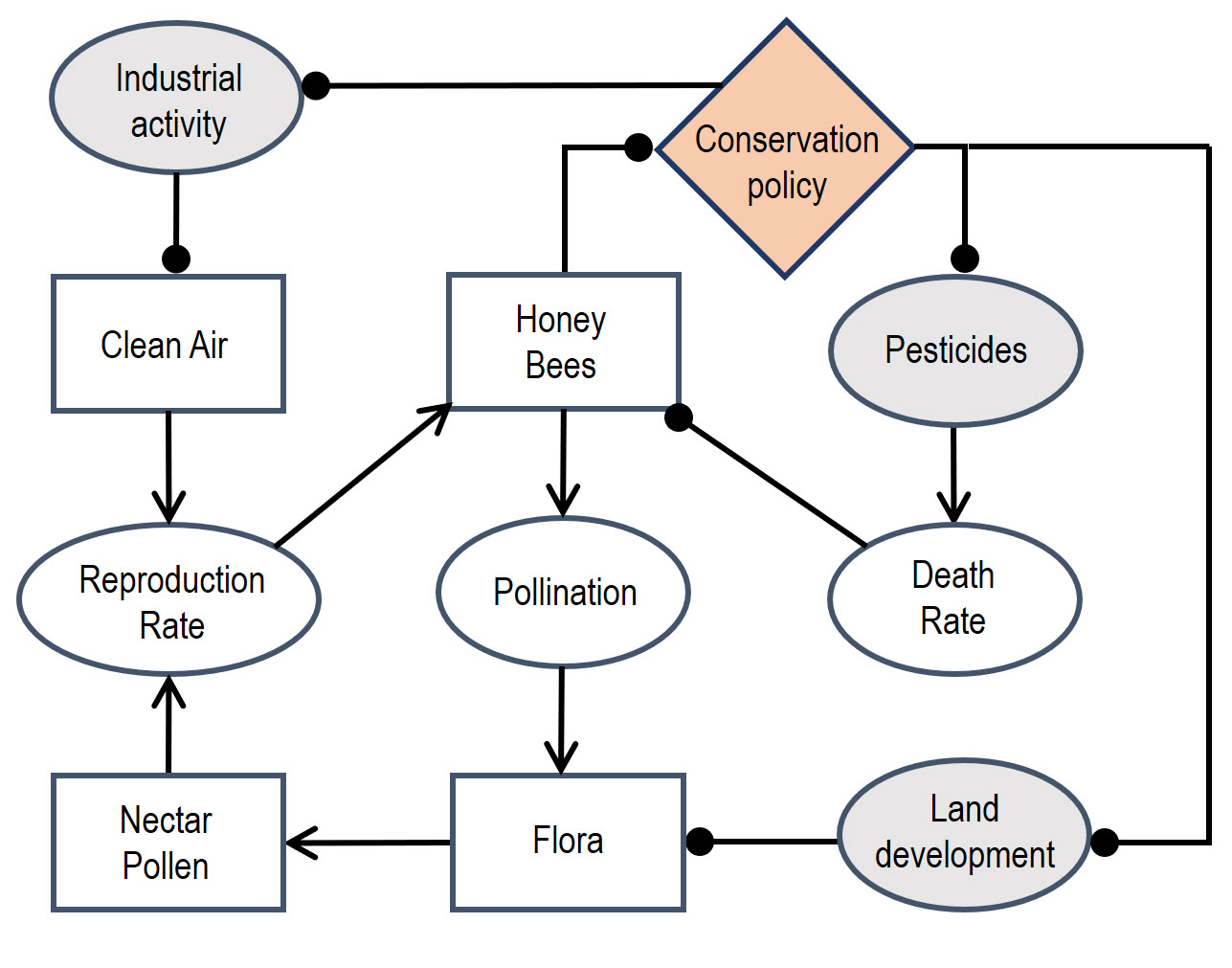 So, what would make the system like the ones exemplified above sustainable? A simple answer within the arbitrarily identified boundaries would be: the balance of the main stocks. The balance does not mean constancy, but rather refers to a range where system can recover from stock fluctuations through internal mechanisms. We already saw how stocks can be regulated by feedback loops that involve both physical forces (natural laws) and intellectual forces (human decisions). Here, we come to an important observation: human decisions need to conform with the natural processes. Natural and human forces must work with each other, not against each other, to support the capacity of the life-providing stocks. This takes us back to the first Hanover Principle of sustainable design. Systems thinking brings us to the right mindset for applying sustainability principles to a variety of case studies we will discuss in the remainder of this course. To extend your learning of the systems approach, you can refer to the additional reading materials:

This book is a really great reading regardless your professional area – it starts with the basics and leads through the fascinating gallery of systems covering a variety of areas and providing some good examples. It uses slightly different terminology in diagrams than we use in this lesson, but emphasizes the same key ideas.