Solar tracking is a technology for orienting a solar collector, reflector, or photovoltaic panel towards the sun. As the sun moves across the sky, a tracking device makes sure that the solar collector automatically follows and maintains the optimum angle to receive the most of the solar radiation. Some solar concentrators hugely benefit from tracking while some others do not. So, the tracking systems can be added with additional cost and certain trade-offs in system design only when it pays off.

The required accuracy of tracking varies with application. For example, concentrators, especially in solar cell applications, require a high degree of accuracy to ensure that the concentrated sunlight is directed precisely to the solar conversion element. Tracking the sun from east in the morning to west in the evening can increase the efficiency of a solar panel up to 45%, according to some manufacturers [Linak]. Precise tracking of the sun is achieved through systems with single or dual axis tracking.

Watch this introductory video (5:33), which provides an illustration to the benefits of sun tracking:

Click for a transcript of DEGERenergie: Solar tracking systems video

MICHAEL HECK: Located in Germany, DEGERenergie is the leading manufacturers of the largest product portfolio worldwide for single and dual access solar attracting systems. As the market leader for solar power plants, with over 35,000 star systems worldwide, we offer a German technology product with the best price-performance ratio in the business.

NARRATOR: The Fraunhofer Institute for Solar Energy Systems calculated a 27% higher output of astronomically controlled systems compared to fixed systems. Spanish solar farm operator Picon de Solar reviewed its revenues of the last few years and discovered that they had achieved a 46% higher yield using DEGER trackers than with a comparable fixed system.

MICHAEL HECK: We have been consistently developing new ideas and concepts for the optimum use of solar energy through solar module tracking.

ANDREAS SCHWEDHELM: The heart of this technology is a sensor which is called the DEGERconecter. The advantage of using this technology is that we can also incorporate different weather conditions. For example, the eye of cloud effect, complete overcast days or also reflections, for example, if there is snow on the ground.

NARRATOR: All DEGER trackers use the patented maximum light detection technology, MLD. Unlike other systems, the DEGERconecter measures which direction most of the light is actually coming from. In doing so, each DEGER tracker finds its own ideal position and uses reflections to raise its output. In a similar way, the DEGERconecter takes the eye of cloud effect into account and, even on completely overcast days, each DEGER tracker moves individually into an ideal position for maximum yield. Within DEGER trackers there is no need for a computer that could crash, no need for calibration or extra wiring that costs money. The simple and individual control of a DEGER tracker provides for a calibration and maintenance-free long-term availability, and guarantees a sustainable operation, even with changing soil conditions. The optimized energy output of DEGER trackers will save an investor a 25% higher expenditure than equivalent fixed systems. Investing in DEGER trackers, customers will realize a profitable internal rate of return. DEGER's systems are guaranteed to have a good future. On average, the energy recovery of DEGER systems is complete after three years, including concrete, steel, and wiring. All steel and concrete parts are completely recyclable. DEGERenergie is an innovative technology with higher yields, low maintenance cost and optimal internal rate of return, emission-free energy production and eco-friendly manufacturing, with warranties extendable to 25 years.

MICHAEL HECK: You can't always rely on the weather, but you can count on your intelligent controlled system.

NARRATOR: DEGERenergie, not only simply brilliant, but brilliantly simple.

So, what types of systems should include tracking devices (a.k.a. trackers)?

First of all, the systems that specifically utilize the direct beam radiation benefit from tracking. In majority of concentrating solar power (CSP) systems, the optics accept only the beam radiation and therefore must be oriented appropriately to collect energy. Such systems will not produce power unless pointed at the sun. Tracking is required for heliostats in central receiver (solar tower) systems. CSP collectors require significant degree of accuracy of sun tracking.

In photovoltaic (PV) applications, tracking devices can be used to minimize the angle of incidence of incoming solar rays onto a PV panel. This increases the amount of energy produced per unit of installed power generating capacity. This increases the efficiency of the system and its cost effectiveness, but, at the same time, tracking is not strictly required for regular flat panel PV as they accept both beam and diffuse radiation.

There are many types of solar trackers, which are different in costs, design complexity, and performance. But we can distinguish two basic classes of systems:

In more detail, these types of trackers will be studied in Section 3.3. of this lesson.

With tracking incorporated in the system design, the cost of the system is understandably higher compared to fixed tilt systems. According to the US DOE report [Barbose et al., 2013], "among projects completed in 2012, the capacity-weighted average installed price in US dollars was 3.3/W for systems with crystalline modules and fixed tilt, compared to 3.6/W for crystalline systems with tracking and 3.2/W for thin-film, fixed-tilt systems." Efforts are constantly made by manufacturers to lower the cost of the tracking systems, making them less complex, more compact, reliable, and easier to maintain. In spite of the additional costs, use of trackers is often a preferred option for utility-scale installations due to significant boost to the system performance. Figure 3-1 shows the trend of increasing use of tracking systems in the U.S. utility-scale PV installations over the 2007–2017 decade. Cumulative tracking system installation reached 79% in 2017 (meaning that only 21% of large PV installations opt not to use trackers). These data include both one-axis and dual-axis tracking systems cumulatively, however there are many more one-axis trackers deplyed than dual-axis trackers. 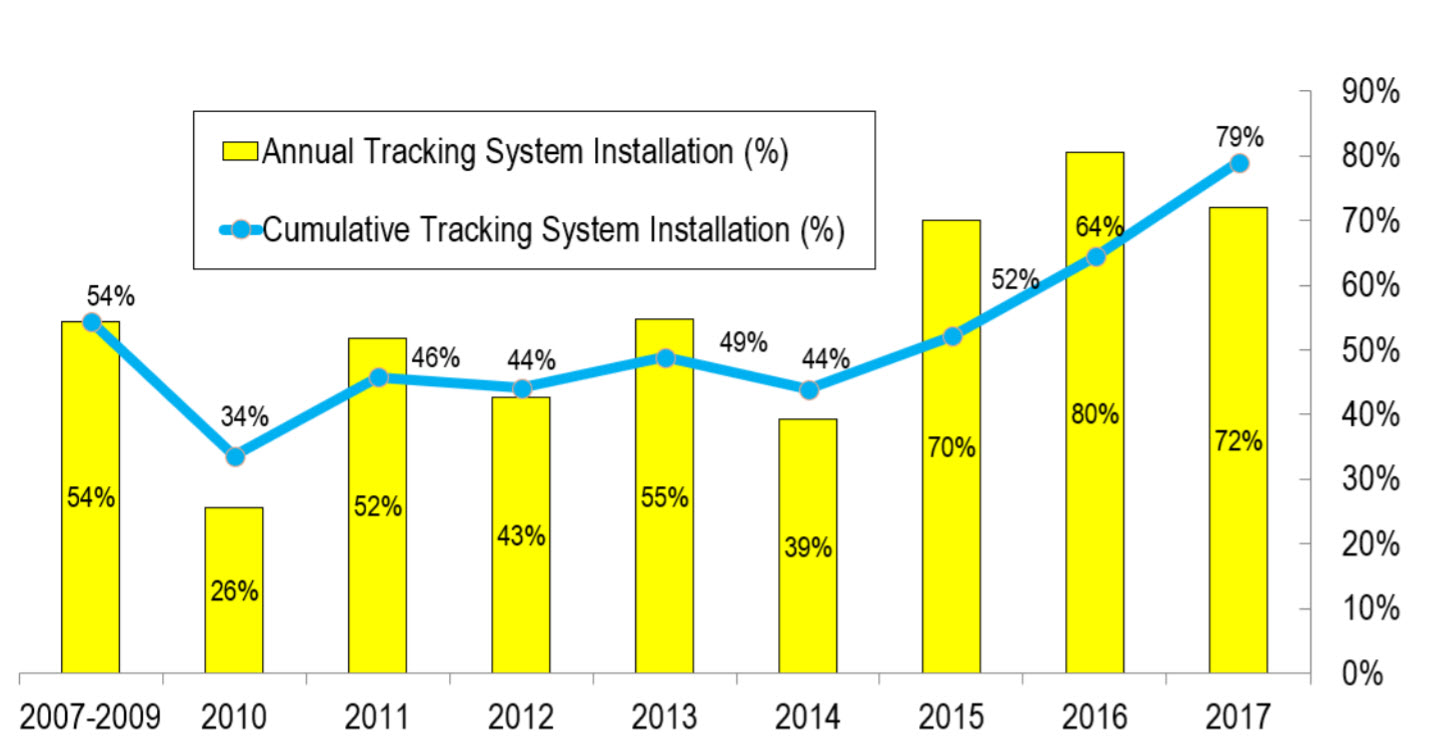