The term Concentrating Solar Power (CSP) covers a range of technologies that utilize optical devices, such as mirrors and lenses, to concentrate the beam solar radiation and to provide for higher efficiency of its conversion into other forms of energy. Typically in many sources, CSP systems are associated with the solar thermal power; although, in a general sense, CSP can work with both thermal solar power and photovoltaic applications. Conversion of the concentrated sunlight can follow three routes: (1) conversion to heat, (2) conversion to electricity, and (3) conversion to fuels. The large utility scale plants primarily use the concentration of thermal energy, which is used to operate a steam turbine generator and produce electric power on site. In this case, the solar heat is used as any other source of heat (such as coal combustion, etc.) to generate steam.

The video animation below (2 min.) presents the CSP plant strategy in brief. For that cycle to run smoothly, day by day generating power, a few key technologies are linked together. These include light concentration, thermal transfer fluids, energy storage, steam powered turbines.

CSP systems can only benefit from the direct beam radiation and therefore are best suited to the regions with a high percentage of clear sky days. The locations that have significant cloudiness, smog, or dust are not favorable.

By concentrator configuration, the commercial CSP systems are represented by:

These are the main technologies that you will read about in this lesson.

The CSP technology is one of the competitive options in energy industry for combustion-free electricity generation. Because the fuel cost is zero, the cost of the CSP technology is mainly associated with the significant initial capital investment. However, cost reduction trend for CSP is confidently predicted in the near future. The main avenues for cost efficiency are linked to:

The CSP technology has been commercialized and has experienced rapid growth since 2005, in part stimulated by the internatitonal concern for increased fossil fuel combustion and climate change. Worldwide, the CSP expansion was led by Spain, which has most CSP plants currently installed. Over the past decade the CSP sector experienced a significant slowdown due to the surge of photovoltaic systems in the renewable energy markets.

Check out these websites:

These sources provide well-organized summaries of all functional CSP facilities all over the world.

If you review projects by country and click on the country name, you get the list of the operating CSP plants. Further you can check the type of technology used at that location and various specifications for the facility.

Check the world maps showing projects that are operational, under development, or shut-down.

By technology type, CSP the current CSP market is led by the parabolic trough plants (over 75%). In spite of much slower growth than PV, solar thermal plants are nevertheless expected to be significant players in future energy economy. The main barrier to the CSP market growth remains high costs of electricity (average 0.20 USD/kWh compared to 0.05-0.10 USD/kWh for PV). 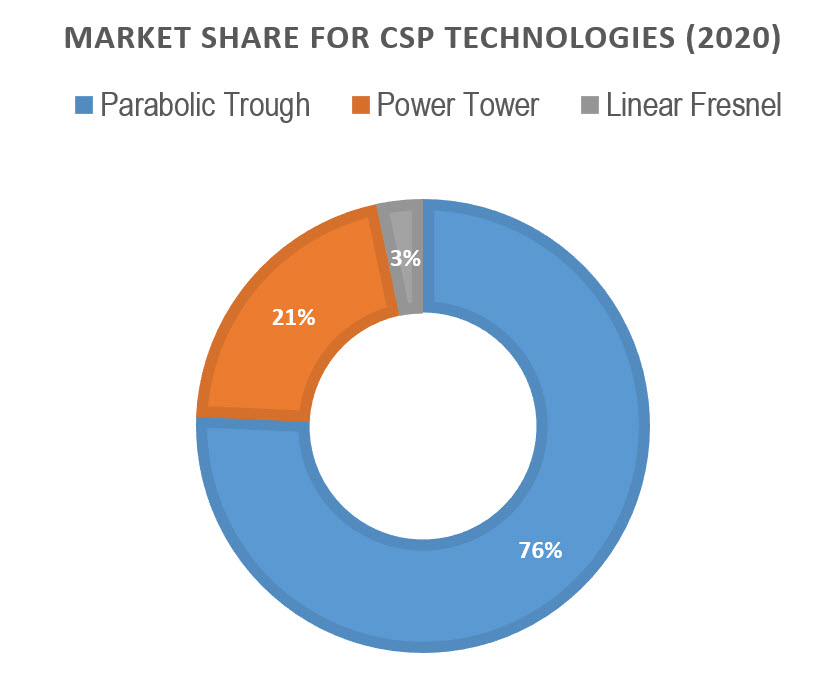 CSP market shares (based on data from fortunebusinessinsights.com)
Mark Fedkin

Further in this lesson, you will learn about different configurations of CSP plants, which differ in design of optical systems (reflectors and light collectors), position of the receiver, and heat transfer networks. These various technologies have their pros and cons and are applied based on the target application, location, and other factors.