What is the difference between renewable and non-renewable energy?

Once again, we will go to the US EIA for a description of renewable energy sources. Please read through the following links (quickly, if nothing else). You are welcome to read the sub-headings for each source, but that is not necessary. The key points are summarized below.

Please note that these readings only scratch the surface of the world of renewable energy sources! The DOE's "Energy 101" YouTube channel has a bunch of good, short videos about different energy sources, note that there are a lot more energy-related links on the EIA websites that you read just now. You could spend your whole career learning about them (as some people do), and still have more to learn. I encourage you to learn as much as you can about these and other sources. It may sound like hyperbole, but you can never know too much about energy. It figuratively and literally makes the world go 'round.

It should be clear how most of these sources fit the definition of renewable energy ("resources that rely on fuel sources that restore themselves over short periods of time and do not diminish") and have various benefits and drawbacks. Please note that this does not provide a comprehensive list of pros and cons, but will give you a solid idea of many of them:

All of these sources renew themselves over short periods of time and do not diminish. And though intermittent, none of these sources are going to disappear in the foreseeable future. They are textbook renewable energy sources.

Okay, so what about biomass and biofuels? They are both derived from living or recently living things (trees, corn, algae, sugarcane, etc.) They also get their energy from the sun (anyone sensing a pattern here?), and plants are usually pretty good at regenerating themselves. But I want you to take a minute to try to think about examples of biomass and/or biofuels that might not be "renewable," in the sense of the definition above. Can you think of any examples of non-renewable biomass?

Nearly all forms of biomass and biofuels are renewable. Corn-based ethanol is the most-used source of bio-based energy in the U.S. Corn can be grown in the same field year after year, so it is renewable. Whether or not it is sustainable is another question, which will be addressed later. The primary source of bioenergy in Brazil is sugarcane. Nearly all of Brazil's vehicles are able to use 100% sugarcane ethanol for fuel. (Contrast this with the U.S., where most automobile engines are only required to be able to handle up to 10% ethanol.) Sugarcane grows year round in Brazil, so is definitely renewable.

There are many other biomass sources that fit our definition of renewable, including animal dung, algae (for biodiesel), jatropha nut, soybean, switchgrass, and more. Wood is used around the world as a source of heat, particularly for cooking. Most trees and shrubs regrow relatively quickly, so they are generally considered renewable. But even a fast-growing tree like an oak (up to two feet per year, according to the National Arbor Day Foundation) has limits. Though most biomass sources are considered renewable, keep this in mind: if you harvest a renewable resource faster than it regenerates, it will not be able to renew itself over time. We will revisit this point in a later lesson, but it is important to remember.

Not all Renewables Are Created Equal

Most renewable energy sources are carbon-free. This means that they do not emit any carbon dioxide when they generate energy. Solar, wind, and hydroelectric are carbon-free. Nuclear, though not renewable, is also considered a carbon-free energy source, because unlike coal and natural gas, it does not burn. As noted in a previous reading, nuclear energy generates heat through fission, not combustion. Biomass and biofuels are often considered carbon-neutral because they emit carbon dioxide when they are burned. So, why are they carbon neutral? 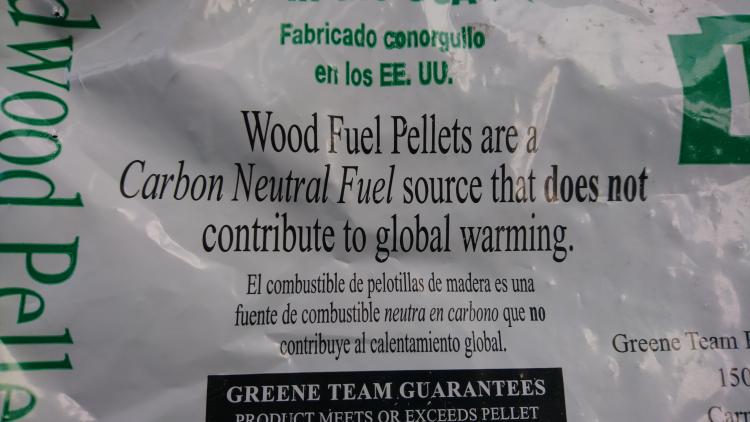 Figure 1.6: Carbon neutral wood pellets. This is printed on a bag of wood pellets, which are used for heating in a pellet stove. These emit CO2 when burned, but effectively do not impact the level of carbon dioxide in the atmosphere. The pellets are made of leftover sawdust from timber operations. Note that CO2 was emitted in processing, packaging, and shipping, so "carbon neutral" is a bit misleading.
Credit: D. Kasper.

The International Energy Association (IEA) is a good source of information for international energy data. The US EIA (not to be confused with the IEA) publishes some international data as well, but IEA is usually the first place I look. The chart below shows the estimated energy use by type worldwide in 2016, and the data are from their 2018 Key World Energy Statistics document. Note that the energy unit they use is Mtoe, which stands for million tonnes of oil equivalent. A Mtoe is equivalent to about 0.04 quads. In other words, there are about 25 Mtoe in a quad. The amount of energy is not important for our purposes, but please take note of the percent of the total that each energy source provides.

FYI, another good, reliable source of global energy data is BP's annual "Statistical Review of World Energy." It is worth browsing if you are interested! 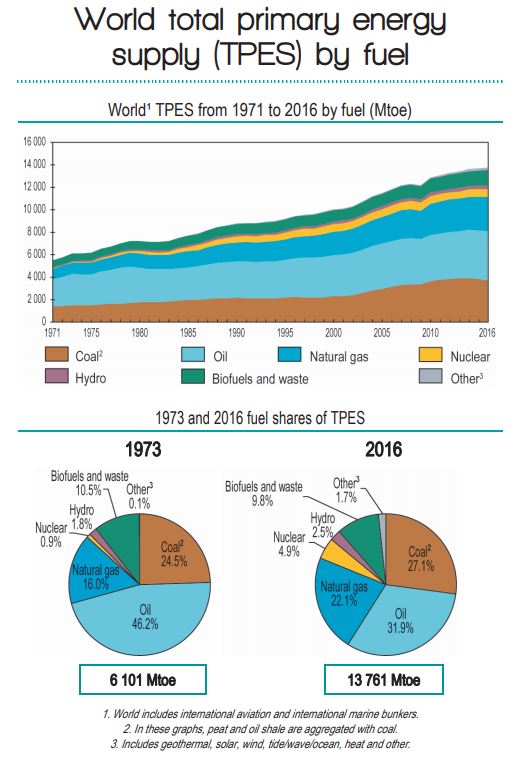 There are a few interesting things to point out from the chart above. 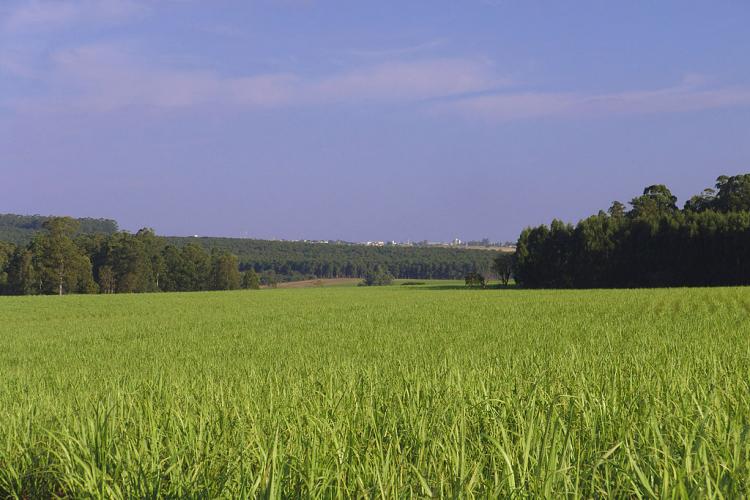 Figure 1.8: Sugarcane field in Brazil. Brazil is the world's leading producer of sugarcane and sugar-based ethanol. Even the waste material from the sugarcane extraction process can be used for energy generation, or to make secondary products like compostable plates and silverware.
Credit: José Reynaldo de Fonseco, CC-BY 2.5

Non-renewable energy sources diminish over time, and are not able to replenish themselves. In other words, they are finite, and once they are used, they are effectively gone because they take so long to reform.

You have already read about the four non-renewable energy sources: coal, oil, natural gas, and nuclear. Let's start with coal, oil, and natural gas, which (as you read earlier) are referred to as fossil fuels. Fossil fuels were created from the remains of dead plants and animals. The source material is renewable (it's biomass!), but since they take millions of years to form, they are not replenished over a "short" period of time, so are non-renewable. Fossil fuels are forming somewhere under your feet right now, but don't hold your breath waiting for them to finish.

The nuclear energy we use comes from an isotope of uranium called U-235. Unlike fossil fuels, U-235 has cosmic origins: it was formed by one or more supernovae around 6 billion years ago, about 1.5 billion years before the Earth was formed (a supernova is a collapsing star, "supernovae" is the plural form of supernova) (source: World Nuclear Association). Again, this is not renewable on a human timescale.

All fossil fuels emit carbon dioxide (CO2) and other emissions when they are used to generate energy. Recall that they are made mostly of hydrogen and carbon, and the carbon mostly ends up as CO2. Nuclear is considered carbon-free, because it is not burned, and it is not made of carbon. Remember that energy is extracted through fission, or splitting of atoms. This generates heat, but no emissions. (It is important to note that it does result in very dangerous and long-lasting radioactive waste, but that will be addressed in a future lesson.)

We hear a lot about renewables and natural gas in the U.S., as their use has been growing rapidly for some time now. But as you can see in this chart from the EIA, coal and nuclear still constitute over 40% of all electricity generation in the U.S. Solar, despite its massive growth and growth potential, is only 1.8%! We have a long way to go, people! 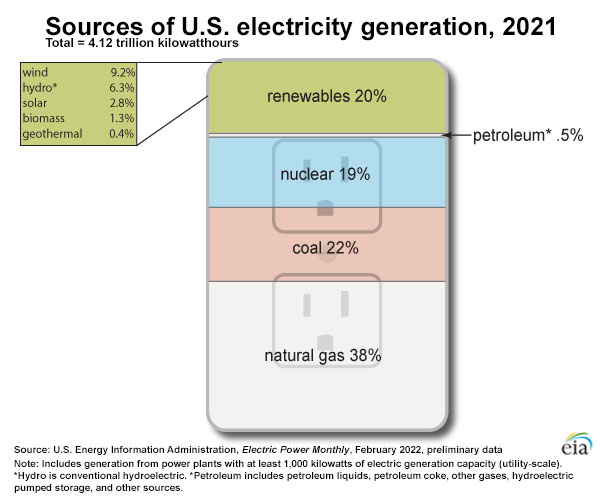