It may be helpful to summarize some of the key points from the previous page (though more will be addressed in this week's homework questions):

Sustainability is some heavy, complex stuff! Most would argue that the future of civilization depends on how we address sustainability, starting yesterday <raising hand>. As Asher Miller phrases it in his introduction to The Post Carbon Reader, "The success or failure of the human experiment may well be judged by how we manage the next ten to twenty years" (p. xv). Sustainability is a very important topic, but it is an even more complex and broad topic than energy. I don't expect you to be an expert (yet), but I hope that this course helps you think critically about sustainability-related and other claims.

I have a challenge for you: think of something that you did in the past week that did not involve energy.

Okay, so that's not really a fair challenge. Everything we do, even thinking about things that we might do, require energy. Here's a more reasonable challenge: think of something that you did in the past week that did not involve the use of non-renewable energy.

Any food you eat almost certainly required non-renewable energy. There are obvious connections like farm machinery, artificial fertilizers, and herbicides, transporting food, refrigerating food, cooking food, and packaging food. But even if you grow your own, you likely used a tool or fencing that was manufactured using non-renewables, seeds that were processed and shipped with fossil fuel-using machines, packaging that was made using non-renewable energy, or maybe even plastic row markers made with petroleum-based plastics. Almost all transportation uses non-renewables, most businesses run on non-renewable energy sources (either directly or indirectly through electricity generation), almost all of the products you buy contain materials either made of or that are processed with fossil fuels. The electronic device you are looking at right now is partially made of and manufactured using fossil fuels. In short, modern society is very dependent upon access to non-renewable energy, particularly fossil fuels. As Asher Miller notes in The Post Carbon Reader:

Look around and you'll see that the very fabric of our lives - where we live, what we eat, how we move, what we buy, what we do, and what we value - was woven with cheap, abundant energy. (p. xiv)

Watch the video below for an interesting 5-minute journey through the last 300 years of fossil fuels in society.

It all started with a big bang. Wait, we don't have to go back that far. The earth was formed 4.5 billion years ago. No, still too far. Try this. It's the middle ages. People in Britain run out of firewood. They start burning coal, but they use up the coal on the ground. Miners dig deep, Coal mines fill with water. Samuel Newcomen invents a coal-burning steam engine to pump out water so miners can keep digging. James Watt makes it practical for other uses. Now we have ingredients for the industrial revolution. Fossil fuels and a way to put them to work. All hell breaks loose. Coal miners bog down lugging coal. Rails make it easier rails and with steam engines combined make a railroad. Michael Faraday makes the first electric motor. Nicola Tesla invents alternating current. Soon, utility companies start burning coal to generate electricity. Meanwhile, Edwin Drake drills the first rock oil well in Pennsylvania and Gottlieb Daimler builds an automobile running on petroleum. Coal tar and oil are turned into industrial chemicals and pharmaceuticals that prolong life. More population growth. The Wright brothers start oil fueled Aviation. Fritz Haber and Carl Bosch make fertilizer from fossil fuels. Fertilizer and oil-powered tractors expand food production, feeding more people. World War One is the first fossil fueled conflict. Then comes World War Two, giving us guided missiles and atom bombs. In between is a great depression partly caused by overproduction. Powered assembly lines make products faster than people need them. Advertising executives invent consumerism to soak up overproduction. It's the 1950s. Advertisers use television to hook new generations of consumers. In the 70s, there's an oil shock. Everyone's shocked to realize how dependent they are on oil. With the energy crisis, the environmental movement is born. But oil prices fall, and everyone forgets energy shortages. There's a showdown between market and planned economies. Market wins. Goodbye evil Soviet empire. Politicians decide the market will solve everything. Personal computers arrive.

Globalization takes over when the market notices labor is cheaper in China. Suddenly everyone has a cell phone, but world oil production stalls out. China's now burning half the world's coal to make export products, but where will China get more coal and oil to fuel more growth? Environmental problems everywhere. Rising CO2 levels lead to record heat waves, floods, droughts. Oceans acidify. Topsoil erodes by 25 billion tons a year from industrial agriculture. Ancient forests disappear. Species go extinct at a thousand times normal rates. Freshwater is scarce or polluted. Oil companies drill in miles of sea water because the easy oil is gone, but a deep water oil platform explodes and fouls the Gulf of Mexico. Manufacturing moves to polluting countries where labor is cheap, while the U.S. becomes a casino. The financial sector is forty percent of the economy. But wall street is over leveraged. Banks fail, unemployment soars, credit evaporates. The economy is on the verge of collapse! Okay. Present time. It's amazing how far we've come in 200 years. Just three human lifetimes from the beginning of industrialism until now. But where are we headed? We can't keep doubling human population. We can't keep dumping carbon in the atmosphere. We can't keep ruining topsoil. We can't keep growing population and consumption or basing our economy on depleting fossil fuels. We can't just print more money to solve the debt crisis. It's been an exhilarating ride but there are limits. Now, it's not the end of the world, but we have to do four things fast: Learn to live without fossil fuels. Adapt to the end of economic growth as we've known it. Support seven billion humans and stabilize population at a sustainable level. And deal with our legacy of environmental destruction. In short, we have to live within nature's budget of renewable resources at rates of natural replenishment. Can we do it? We have no choice. Alternative energy sources are important, but none can fully replace fossil fuels in the time we have. Also, we've designed and built our infrastructure for transport, electricity, and farming to suit oil, coal, and gas. Changing to different energy sources will require us to redesign cities, manufacturing processes, health care and more. We'll also have to rethink some of our cultural values. None of our global problems can be tackled in isolation, and many cannot be fully solved. We'll have to prepare for business as unusual. Our best goal is resilience: The ability to absorb shocks and keep going. If we do nothing we still get to a post carbon future, but it will be bleak. However, if we plan the transition we can have a world that supports robust communities of healthy creative people and ecosystems with millions of other species. One way or the other we are in for the ride of a lifetime. Understand the issues and pitch in. It's all hands on deck!

The charts below provide rather dramatic evidence of how important non-renewable energy is to the U.S. Both charts are from the EIA's Annual Energy Outlook (AEO) series, which are published on a yearly basis (though not always on time, considering that in mid-2018, the 2018 AEO had not been released).

The first chart is from the 2015 version of the AEO. Though a bit outdated, I put it here because the chart style makes it very easy to see the dominance of non-renewable energy sources. The second chart is from the most recent report but is not quite as easy to interpret. Another nice feature of these charts is that they include both historical use and projected future use. Any way you slice it, the charts make clear that non-renewable energy - particularly fossil fuels - have played and will continue to play a dominant role in society. At this point, our society simply cannot function at its current capacity without them.

Another aspect worth noting is that aside from recessions (e.g., early 1980's and 2007-8), energy use continues to increase over time. Despite consistent increases in energy efficiency, the U.S. can't seem to level off, never mind reduce overall consumption. This is also something that will have to be addressed if we are going to have a sustainable energy future. 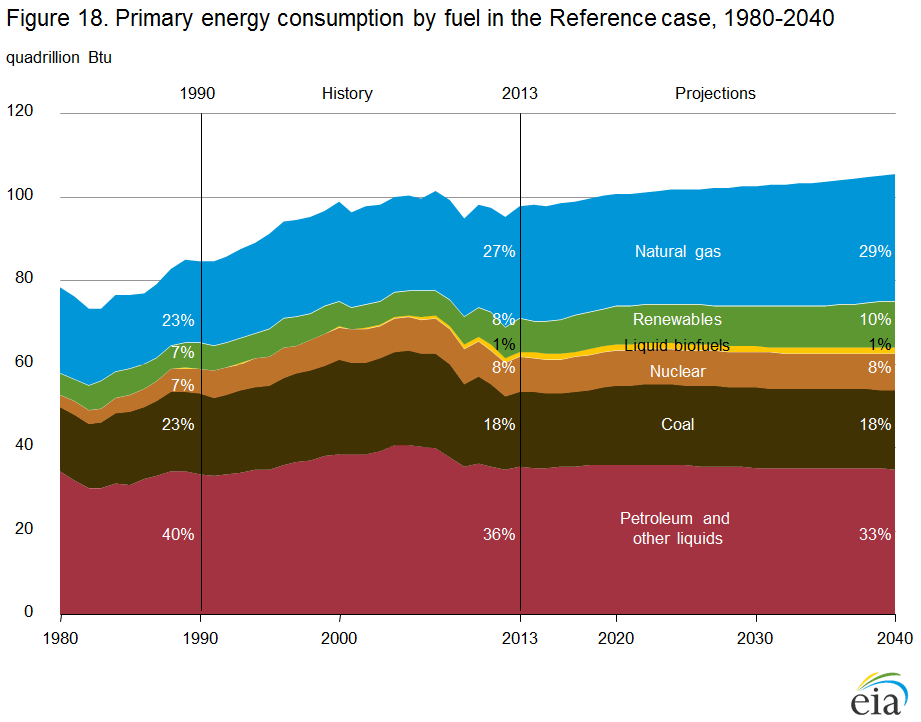 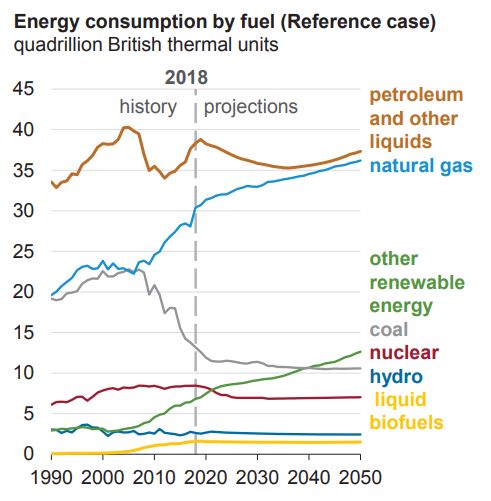 Figure 1.14: This uses data from the most recent (2019) Annual Energy Outlook. Figure 1.13 makes the percentages of each use much clearer, but the story in 2019 is the same: Increased natural gas, which will almost catch up to petroleum use by 2040; increased (to a lesser extent) renewables except for hydro; decreasing coal use, and relatively steady use of all other sources. Petroleum and natural gas are projected to supply nearly 75% of all energy consumption by 2040.
Credit: US EIA, Annual Energy Outlook 2019

Non-renewable energy is extremely useful - it has played an essential role in human society developing to the point that it has. It is energy dense, generally easy to transport and control, and is used for a variety of purposes. Non-renewable energy will continue to play a starring role, for at least the short term future. I enjoy the freedom of the open road in my car. I like to have a house in which I have some control over the temperature and humidity. I like to buy new things from time to time. I enjoy the occasional air travel. I eat food that was shipped from countries on the other side of the world. If we are all to enjoy such things (and more) in the way society and our economy is currently structured, we need access at least to fossil fuels. But given our understanding of the nature of sustainability and non-renewable energy, this cannot go on forever. In fact, it will probably need to change dramatically within the next 10-15 years.

If nothing else, since non-renewable energy is finite, we will reach limits at some point in the future - exactly when is open to debate. But even before that eventuality, it is becoming apparent that the results of unsustainable energy (and resource) use is making it difficult for current generations to meet their needs, never mind future generations. The topics in the next lessons illustrate some of the reasons that scientists and others are worried about the sustainability of our society, some of which are directly related to energy, others not.

Richard Heinberg mentions four things that must be done to achieve a sustainable society with an adequate quality of life. Think about how difficult each of these is. Which do you think is the most difficult to achieve? Do you think they are even feasible? Can you envision a society that achieves these, and if so, is it good or bad? I don't have the answers (I wish I did!), but I think they are important questions to ask. Heinberg is not alone in thinking these are important.