“We are what we eat.” We’ve all heard this common expression and may think of it in nutritional and biological terms: for example the way that the chicken or beans we consume are turned into muscle tissues. However, this simple phrase has a deeper meaning: Food production, food culture, and organization of food transport and consumption loom very largely in the way that our society "is". These food-related activities also strongly impact the earth's fundamental surface processes and ecosystems. So, we are what we eat, but in a societal as well as an individual sense. This wider vision of food as a driving presence within society is increasingly relevant as groups and individuals like you become more interested in the ramifications of their food for themselves and for the environment. This course is designed to provide you with the tools to understand the combined environmental and human dimensions of food production and consumption. To do so we must start with some simple questions and reflect a bit on how we can address them. 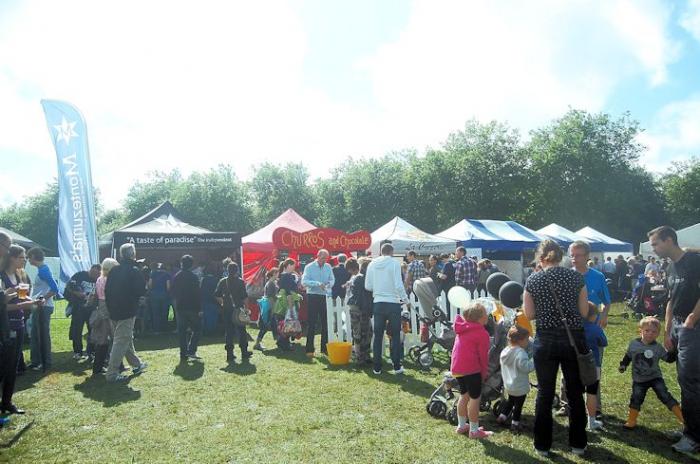 Figure 1.1.1. The above image of a food festival in the United Kingdom captures both the excitement food creates in our culture, the varied cultural influences leading to different types of street food, and behind the scenes, the pathways of production and transportation that keep food moving to consumers' plates at all times.
Credit Helen (Afeitar), used with permission, Flickr: Liverpool food festival, Creative Commons (CC BY 2.0)

Where does our food come from? And, how can we make our food supply more sustainable? These two questions may seem simple, but they lead us to a range of considerations that are covered through the remainder of this course. As we consider these questions in each module, we'll explore a model of food systems as human systems in interaction with natural systems, or coupled human-natural systems (Fig. 1.1.2). As the name suggests, the concept of Coupled Human-Natural Systems (CHNS) tries to describe two major components that are involved in the production and consumption of food. The first component is the natural world and a set of interacting natural factors. Some of you may know the term ecosystem, and ecosystems developed from interacting natural components such as water, soils, plants, and animals (e.g. Fig. 1.2.1 in module 1.2) are the context for most food production. Throughout the course, we may also refer to the elements and processes of ecosystems as the earth system and earth system processes, or simply as the environment. These natural systems are a basic foundation of the food supply that we will learn more about in modules four through six (Environmental Dynamics and Drivers). The continued productivity of natural systems is evaluated as being crucial to sustainability, as you will see in the short reading below.

On the other hand, the two questions posed above involve the role of people, both as individuals in groups such as communities, institutions (including colleges and universities, farm and food processing businesses, and farmer organizations, for example) and political units such as countries. To introduce this dimension we often refer to this globally as the "human system" within a coupled human-natural system (Fig. 1.1.2.; a complete definition of human and natural systems are given in Module 1.2). Within the human system, factors such as styles of farming and food choices, tastes, economic inequality, and farmer and scientific knowledge that inform humans' management of ecosystem emerge from human cultural, social, economic, and political influences. 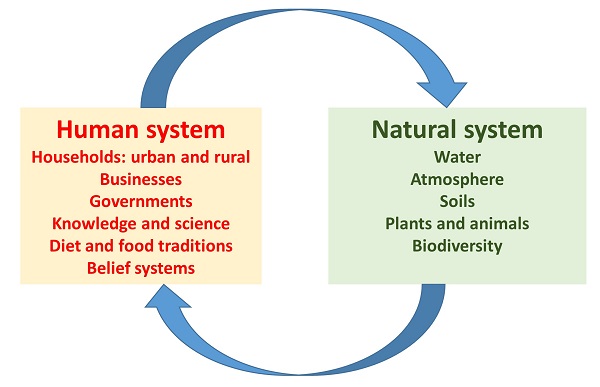 Figure 1.1.2. A simple illustration of coupled human and natural systems with reference to food production. The list of human (households: urban and rural, businesses, governments, knowledge and science, diet and food traditions, belief systems) and natural system components (water, atmosphere, soils, plants and animals, biodiversity) on each side of the diagram is not exhaustive, and the diagram will be revisited throughout the course. The reciprocal arrows represent the mutual effects of each subsystem on the other, and are highly schematic, although they can denote specific impacts or feedbacks that will be addressed in module 1.2 and beyond.
Credit: Steven Vanek, adapted from the National Science Foundation (NSF)

The end result of these interactions between human and natural systems are what we call a food system, which has has also been called an "environment-food system" (see the introductory reading on the next page) with "environment" pointing to the natural components and the "food system" pointing to the human organization needed to produce, transport, and deliver food to consumers, along with a host of cultural, regulatory, and other aspects of human society that relate to food. In terms of geography, the interactions of environment-food systems exhibit a huge range of variation across the world. As we all know this variation exists between countries, so that food and farming types can be associated with “Chinese food,” “French food,” “Peruvian food”, or scores of other examples. Farming and food also vary a great deal among regions within a country and sometimes even among local places, as we know if we compare a large dairy or grain farm with a fresh vegetable farm serving local markets here in the United States. Understanding the geographic variations of environment-food interactions is key to recognizing their increased relevance and importance to people and places.

‹ Module 1.1: The Future of Food: Course Overview up Guided Introductory Reading: Why Environment and Food? ›