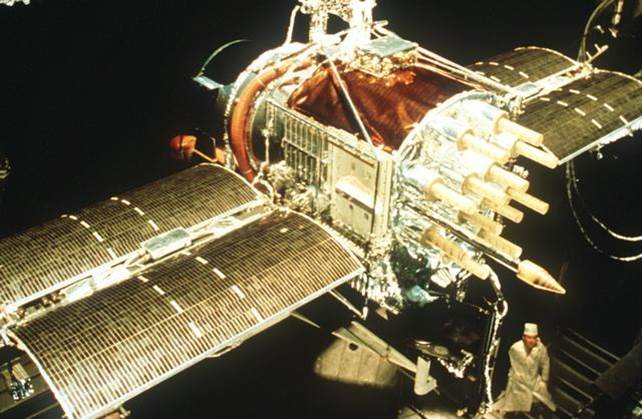 The 11 GPS satellites launched from Vandenberg Air Force Base between 1978 and 1985 were known as Block I satellites. The last Block I satellite was retired in late 1995. Ten of the satellites built by Rockwell International achieved orbit on Atlas F rockets. There was one launch failure. All were prototype satellites built to validate the concept of GPS positioning. This test constellation of Block I satellites was inclined by 63° to the equator instead of the current specification of 55°. They could be maneuvered by hydrazine thrusters operated by the control stations.

The first GPS satellite was launched February 22, 1978 and was known as Navstar 1. An unfortunate complication is that this satellite was also known as PRN 4 just as Navstar 2 was known as PRN 7. The Navstar number, or Mission number includes the Block name and the order of launch, for example I-1, meaning the first satellite of Block I. and the PRN number refers to the weekly segment of the P code that has been assigned to the satellite, and there are still more identifiers. Each GPS satellite has a Space Vehicle number, an Interrange Operation Number, a NASA catalog number, and an orbital position number as well. However, in most literature, and to the GPS receivers themselves, the PRN number is the most important.

Continuing the discussion of the space segment, here is the Block 1 satellite. These were the first launched. There are none of them functional today. But they certainly did an extraordinary job in getting the system started. It was an experimental system at that time. But it certainly has worked out well.

The Block I satellites weigh 845 kg in final orbit. They were powered by three rechargeable nickel-cadmium batteries and 7.25 square meters of single-degree solar panels. These experimental satellites served to point the way for some of the improvements found in subsequent generations. For example, even with the back-up systems of rubidium and cesium oscillators onboard each satellite, the clocks proved to be the weakest components. The satellites, themselves, could only store sufficient information for 3½ days of independent operation. And the uploads from the control segment were not secure; they were not encrypted. Still, all 11 achieved orbit, except Navstar 7. The design life for these satellites was 4½ years, but their actual average lifetime was 8.76 years. That is something that continues. The GPS satellites have mostly outlived their design life.There are no Block I satellites operating today. 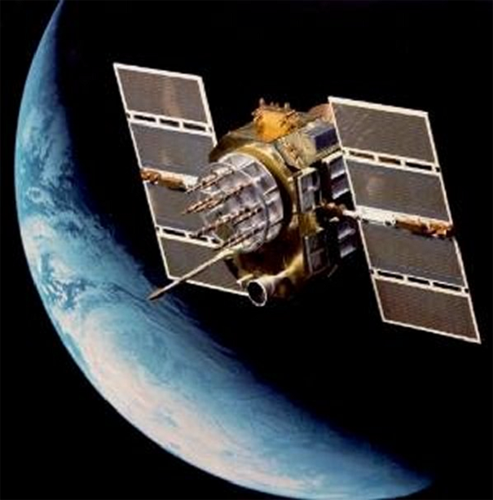 The next generation of GPS satellites are known as Block II satellites. The first left Cape Canaveral on February 14, 1989, almost 14 years after the first GPS satellite was launched. It was about twice as heavy as the first Block I satellite and was expected to have a design life of 7½ years with a Mean Mission Duration, MMD of 6 years. The Block II satellites could operate up to 14 days without an upload from the control segment and their uploads were encrypted. The satellites themselves were radiation hardened, and their signals were subject to selective availability.

These satellites were built by Rockwell International. Block II included the launch of 9 satellites between 1989 and 1990. None of the Block II satellites are in the constellation today. the last was decommissioned in 2007 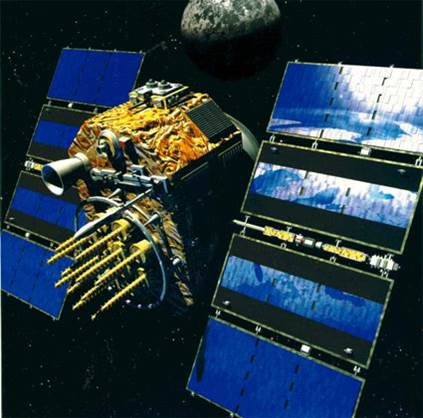 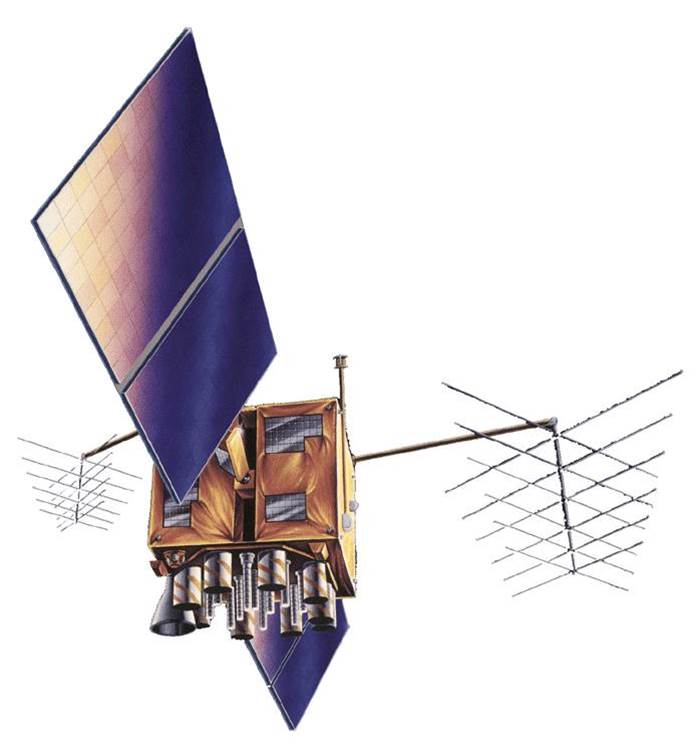 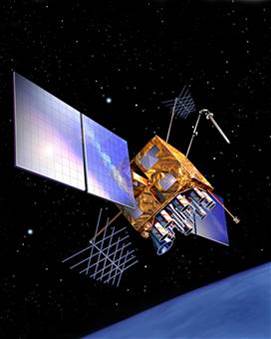 In September of 2005, the first of the next improved block, called Block IIR-M was launched. These are IIR satellites that were modified before they were launched. The modifications upgraded these satellites so that they radiate two new codes; a new military code, the M code, a new civilian code, the L2C code, and demonstrate a new carrier, L5. There are Block IIR-M satellites in the constellation today. 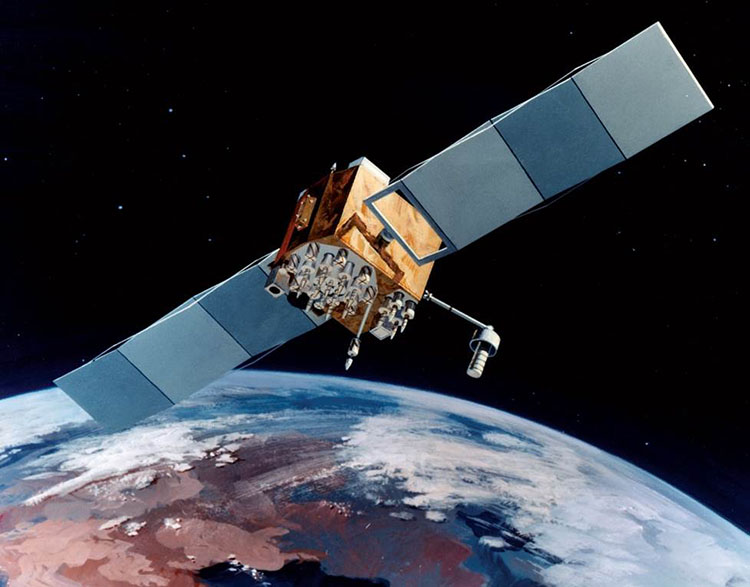 The L2C signal and the third civilian carrier will be very helpful because, as you know, ionosphere modeling is an important part of error management in GPS. We can model it to some good degree with two carriers. Three will obviously make that modeling even better.

Block IIF is the most recent group of GPS satellites launched and the first of them reached orbit in May of 2010. There has been steady and continuous improvement in the GPS satellite constellation from the beginning. 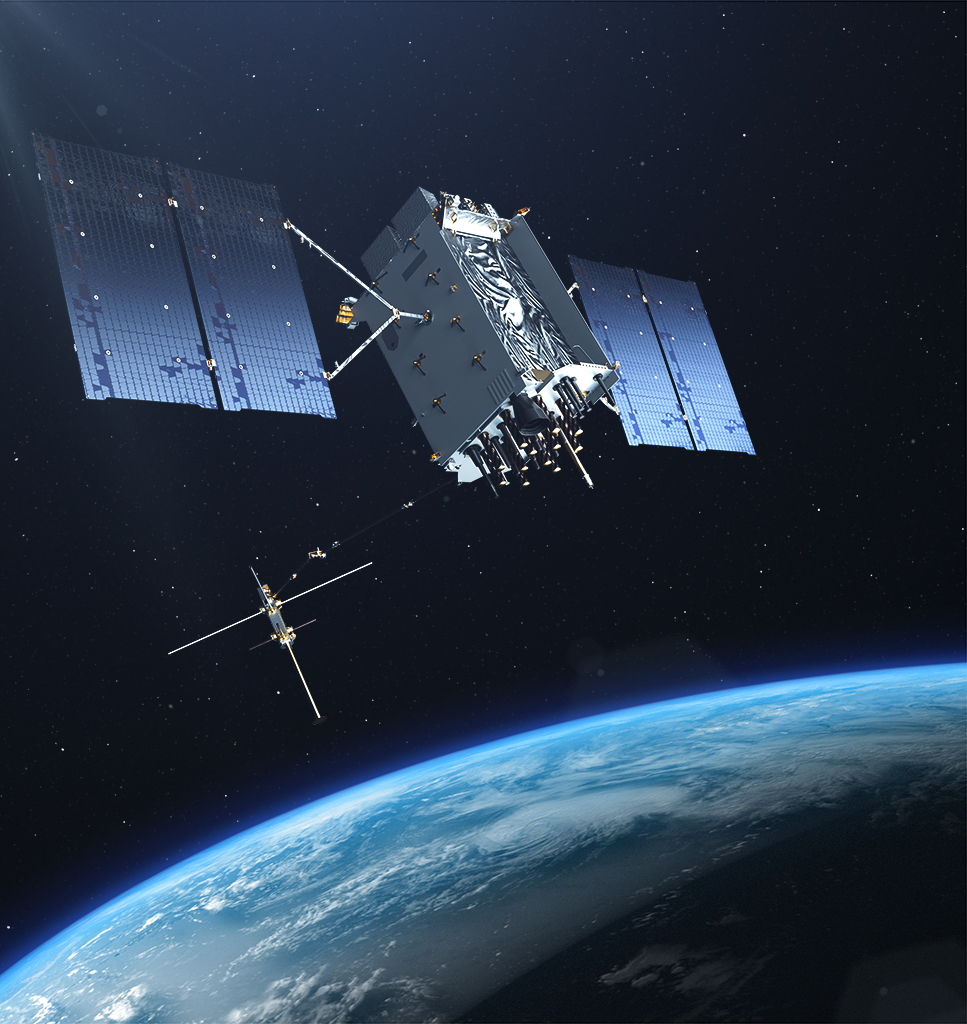 Block III Satellite 2018-?
Source: https://insidegnss.com/gps-iii-the-next-big-step-in-gps-modernization/
Block III satellites are replacing the older satellites as they are taken out of service. There are now IIIA satellites on orbit. This block will be deployed in three increments. The first of these is known as IIIA. It will be resistant to hostile jamming. The next two increments are IIIB and Block IIIC. Higher power is planned for the signals broadcast by the IIIB satellites. The IIIB and IIIC satellites will also carry Distress Alerting Satellite System (DASS) repeaters. When the whole GPS constellation has DASS repeaters on board there will be global coverage for satellite-supported search and rescue and at least four DASS-equipped satellites will always be visible from anywhere on Earth. This system will enhance the international Cospas-Sarsat satellite-aided search and rescue (SAR) system and will be interoperable with the similar planned Russian (SAR/GLONASS) and European (SAR/Galileo) systems. Block III satellites will have cross-link capability to support inter-satellite ranging and transfer; telemetry, tracking and control (TT&C) capability. Block IIIB satellites will have from two to four directional crosslink antennas. This means they can be updated from a single ground station instead of requiring each satellite to be in the range of a ground antenna to be updated. This and their high speed upload and download antennas could help increase the upload frequency from once every 12 hours to once every 15 minutes. Each Block III satellites will have three enhanced rubidium frequency standards (clocks) and a fourth slot will be available for a new clock, i.e. a hydrogen maser. It was established in 2010 that all Block III satellites will have on-board Laser Retroreflector Arrays (LRA) (aka retro-reflectors). The satellite laser tracking available with this payload will provide data from which it will be possible to distinguish between clock error and ephemeris error Similar LRA are planned for the Russian (GLONASS) and European (Galileo) systems. There is a plan for these satellites that includes the broadcast of a new civil signal, known as L1C, on the L1 carrier. This signal was designed with international cooperation to maximize interoperability with Galileo's Open Service Signal and Japan's Quazi-Zenith Satellite System (QZSS). Codes available from earlier blocks, i.e. the M code, L5, the P code and the C/A code will be broadcast with increased power from the Block III satellites. 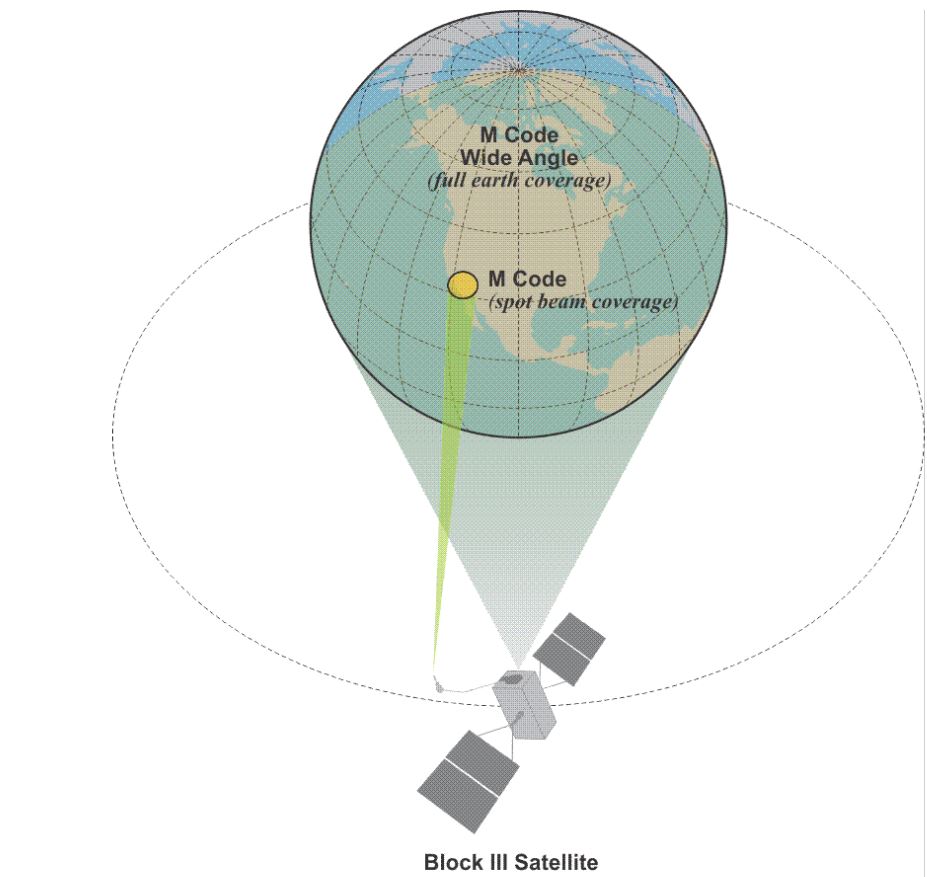 Block III Spot Beam
Source: GPS for Land Surveyors
The broadcast of the M code will change in an interesting way. It will continue to be radiated with a wide angle to cover the full earth just as in the Block IIR-M satellites, but the Block IIIC M code will also have a rather large deployable high-gain antenna to produce a directional spot beam. The spot beam will have approximately 100 times more power (-138 dBW) compared with (-158dBW) the wide angle M-code broadcast. It will have the anti-jam (AJ) capability to be aimed to a region several hundreds of kilometers in diameter. A side effect of having two antennas is that the GPS satellite will appear to be two GPS satellites occupying the same position to those inside the spot beam.
‹ GPS Modernization up The Legacy Signals and Power Spectral Density Diagrams ›