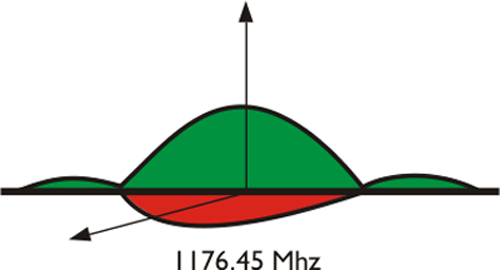 Alright, L2C is fine, but what about L5, the new carrier being broadcast on the Block IIF satellites? It is centered on 1176.45 MHz, 115 times the fundamental clock rate.

As you see from the illustration, the basic structure of L5 looks similar to that of L1. There are two pseudorandom noise (PRN) codes on this 20 MHz carrier. The two codes are modulated using Quad Phase Shift Key (QPSK), and they are broadcast in quadrature to each other. However, borrowing a few pages from other recent developments, the in-phase (I) signal carries a data message that is virtually identical to the CNAV on L2. The other, the quad­raphase signal (Q), is data-less and L5 utilizes chip-by-chip time multiplexing in broadcasting its two codes as does L2C in broadcasting CM and CL.

Both L5 codes have a 10.23 MHz chipping rate, the same as the fundamental clock rate. This is the same rate that has been available on the P(Y) code from the beginning of the system. However, this is the fastest chipping rate available in any civilian code. L5 has the only civilian codes that are both ten times longer and ten times faster than the C/A code. Since the maximum resolution available in a pseudorange is typically about 1% of the chip­ping rate of the code used, the faster the chipping rate the better the resolution.

L5 has about twice as much power as L1, and since L5 does not carry military signals, it achieves an equal power split between its two signals. In this way, L5 lowers the risk of interference and improves multipath protection. It also makes the data-less signal easier to acquire in unfavorable and obstructed conditions.

Unlike L2C, L5 users will benefit from its place in a band designated by the International Telecommunication Union (ITU) for the Aeronautical Radionavigation Navi­gation Services (ARNS) worldwide. Therefore, it is not prone to interference with ground based navigation aids and is available for aviation applications. While no other GPS signal occupies this band, L5 does share space with one of the Galileo signals, E5. L5 does also incorporate Forward Error Correction (FEC).

It is helpful that L5 will share space with one of the E5A signal from an entirely separate satellite system, Galileo. This is the European contribution to GNSS. The fast chipping rate on L5 is also good news.