Before we look at the Neolithic Age revolution, let’s take a look at the pre-Neolithic Age. If we look at the human timeline below we can see that the usage of stone tools began about 3.4 million years ago. This marks the beginning of the Stone Age, which lasted until the advent of metalworking and ended at different regions from ~9000 BCE to 2000 BCE. The genus Homo emerged during the Stone Age. The earliest usage of cooking, clothes, and fire occurred during this pre-Neolithic Age, with their earliest known dates shown in the figure below. In addition to cooking, fire was particularly important from a materials point of view. Fire was used for the tempering of wood arrowheads, annealing flint, and creating charcoal before the Neolithic Age, and has been an important component of materials processes throughout all ages of human existence.

The first of these revolutions was the Neolithic Revolution, which was highlighted by the transformation from a hunter/gatherer population to a farmer/skilled artisan population. It has been argued that three steps were required for the Neolithic Revolution: 1) hunter/gatherer population increase, 2) food production in marginal areas, and 3) several communities at similar stages of development. Near the end of the Stone Age,  six civilizations emerged that satisfied these requirements. 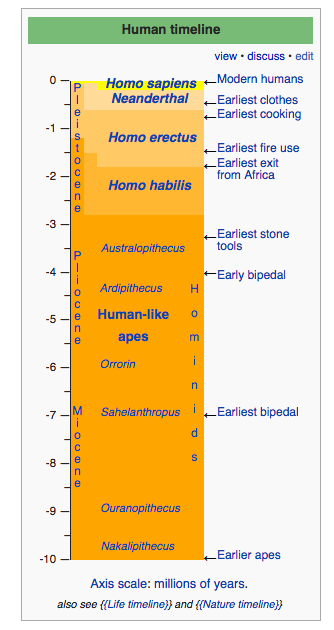 Human Timeline
Click here to see a text alternative of the Figure.
Human timeline with an axis scale in millions of years.
Credit: Wikipedia

Now we will take a closer look at the materials used during the Stone Age.

‹ Why Study Materials? up Flint (and Obsidian) ›
MATSE 81 Materials In Today's World