How Do Geckos Defy Gravity? 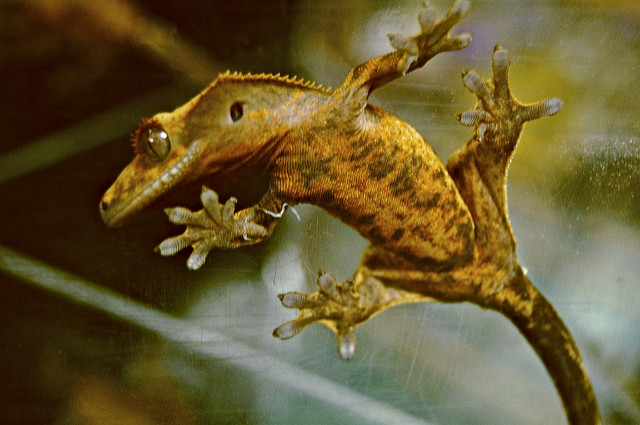 It's midnight and all is still, except for the soft skittering of a gecko hunting a spider. Geckos seem to defy gravity, scaling vertical surfaces and walking upside down without claws, adhesive glues or super-powered spiderwebs. Instead, they take advantage of a simple principle: that positive and negative charges attract. That attraction binds together compounds, like table salt, which is made of positively charged sodium ions stuck to negatively charged chloride ions. But a gecko's feet aren't charged and neither are the surfaces they're walking on. So, what makes them stick?

The answer lies in a clever combination of intermolecular forces and structural engineering. All the elements in the periodic table have a different affinity for electrons. Elements like oxygen and fluorine really, really want electrons, while elements like hydrogen and lithium don't attract them as strongly. An atom's relative greed for electrons is called its electronegativity. Electrons are moving around all the time and can easily relocate to wherever they're wanted most. So when there are atoms with different electronegativities in the same molecule, the molecule's cloud of electrons gets pulled towards the more electronegative atom. That creates a thin spot in the electron cloud where positive charge from the atomic nuclei shines through, as well as a negatively charged lump of electrons somewhere else. So the molecule itself isn't charged, but it does have positively and negatively charged patches.

These patchy charges can attract neighboring molecules to each other. They'll line up so that the positive spots on one are next to the negative spots on the other. There doesn't even have to be a strongly electronegative atom to create these attractive forces. Electrons are always on the move, and sometimes they pile up temporarily in one spot. That flicker of charge is enough to attract molecules to each other. Such interactions between uncharged molecules are called van der Waals forces. They're not as strong as the interactions between charged particles, but if you have enough of them, they can really add up.

That's the gecko's secret. Gecko toes are padded with flexible ridges. Those ridges are covered in tiny hair-like structures, much thinner than a human hair, called setae. And each of the setae is covered in even tinier bristles called spatulae. Their tiny spatula-like shape is perfect for what the gecko needs them to do: stick and release on command. When the gecko unfurls its flexible toes onto the ceiling, the spatulae hit at the perfect angle for the van der Waals force to engage. The spatulae flatten, creating lots of surface area for their positively and negatively charged patches to find complimentary patches on the ceiling. Each spatula only contributes a minuscule amount of that van der Waals stickiness. But a gecko has about two billion of them, creating enough combined force to support its weight. In fact, the whole gecko could dangle from a single one of its toes. That super stickiness can be broken, though, by changing the angle just a little bit. So, the gecko can peel its foot back off, scurrying towards a meal or away from a predator.

This strategy, using a forest of specially shaped bristles to maximize the van der Waals forces between ordinary molecules has inspired man-made materials designed to imitate the gecko's amazing adhesive ability. Artificial versions aren't as strong as gecko toes quite yet, but they're good enough to allow a full-grown man to climb 25 feet up a glass wall. In fact, our gecko's prey is also using van der Waals forces to stick to the ceiling. So, the gecko peels up its toes and the chase is back on.

So now that you have watched the video, can you see how this is an example of nanomaterials? A nanomaterial can utilize size and structure to perform unique abilities. The gecko utilizes van der Waals forces which operate on the scale of nanometers. In addition, the gecko utilizes the unique geometry of its feet to adhere to and release from surfaces. This is an example of using structure (or geometry) to perform a unique ability. At this time, please proceed to the lesson’s video assignment.