6.9 Why do objects absorb the way that they do?

6.9 Why do objects absorb the way that they do?

The atmosphere absorbs a significant amount of radiation in the infrared but rather little in the visible. Also, we see that gases absorb strongly at some wavelengths and not at others. Why is this?

To answer this question, we need to look at the configurations of the electrons that are zooming around atoms and molecules. More than 100 years ago, scientists began using prisms to disperse the light from the sun and from flames containing different elements. While the sun gave the colors of the rainbow, the flames had light in very distinct lines or bands. This puzzle was finally resolved a little more than 100 years ago with the invention of quantum mechanics, which basically says that the electrons zooming around atoms and molecules and the vibrations and rotations of molecules can have only discrete energies that are governed by rules of conservation of angular momentum. 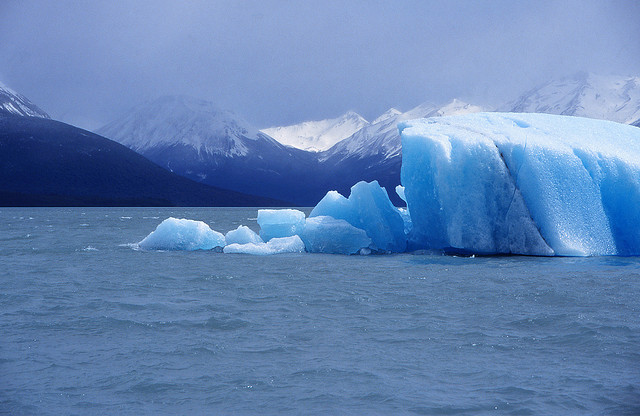 The following bulleted list is a crash course in absorption by the electrons in atoms and molecules. Refer to the figure below the box.

Crash Course: Absorption by the Electrons in Atoms and Molecules 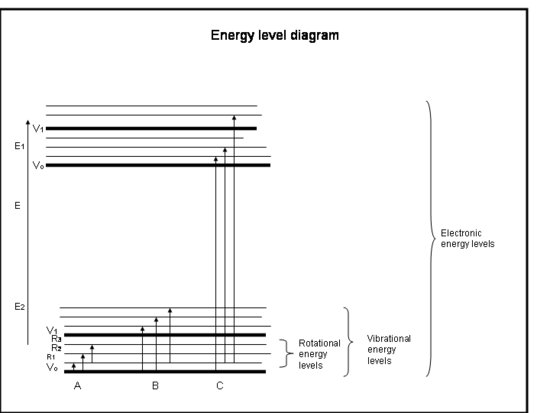 An energy level diagram for a molecule. The greater the distance between lines, the greater the energy of the absorbed or emitted photon and thus the shorter the photon’s wavelength. Not all transitions are allowed between all levels because of the conservation of angular momentum.
Credit: UC Davis chemwiki

Atoms and molecules can absorb radiation (a photon) only if their structure has an energy difference between levels that matches the photon’s energy (hc/λ). Otherwise, the atom or molecule will not absorb the light. Once the molecule has absorbed the photon, it can either lose a photon and go back to its original lower energy level; or it can break apart if the photon energy is greater than the chemical bond holding the molecule together; or it can collide with other molecules, such as N2 or O2, and transfer energy to them while it goes back to its lower energy level. Collisions happen often, so the energy of the absorbed photon is often transferred to thermal energy. 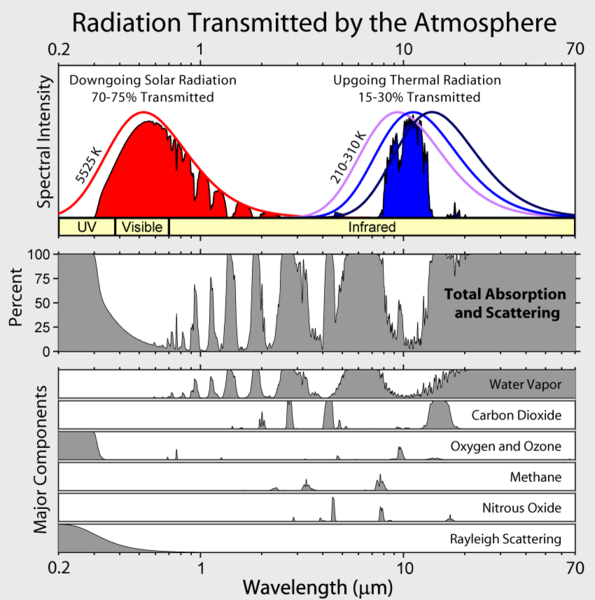 Calculated solar and terrestrial irradiances in the atmosphere. Gases considered for absorption are water vapor, carbon dioxide, oxygen, ozone, and nitrous oxide. Scattering is due to all gases (but mainly nitrogen and oxygen). The top panel shows the downgoing solar radiation at the Earth's surface (black line with red filling) and the upgoing terrestrial radiation at the top of the atmosphere (black line with blue filling). Also shown in the top panel are the Planck spectral irradiances for representative solar and terrestrial temperatures. Note that all curves in the top panel have been scaled such that the peak values are roughly the same. The middle panel shows the total extinction (due to absorption and scattering) by gases in the atmosphere. The bottom panel show the absorptivity of the individual gases and the scattering.
Credit: Robert A Rohde, Global Warming Art, via Wikimedia Commons

Note that Earth's outgoing infrared irradiance is limited to a few atmospheric "windows" and the irradiance at all other wavelengths is strongly absorbed, mostly by water vapor, but also by carbon dioxide, ozone, nitrous oxide, methane, and other more trace gases that aren't shown in the figure above.

‹ 6.8 Kirchhoff’s Law explains why nobody is perfect. up 6.10 How much radiation is absorbed as radiation passes through matter? ›
METEO 300 Fundamentals of Atmospheric Science