Besides being absorbed or transmitted, radiation can be scattered. The scattering can be by particles of all sizes and by molecules. We can talk about the extinction of radiation by a particle that both absorbs and scatters.

Scattering is messy!!!! While absorption simply removes photons, or energy, from a beam of radiation, scattering can redirect the beam of radiation into other directions, where it can be absorbed or scattered some more. Furthermore, the intensity of the scattered radiation in different directions depends strongly on the radiation's wavelength and on the size, shape, and composition of the “particle,” where we can consider a molecule to be a particle.

A very important parameter is called the size parameter:

where r is the radius of a spherical particle and λ is the radiation’s wavelength. 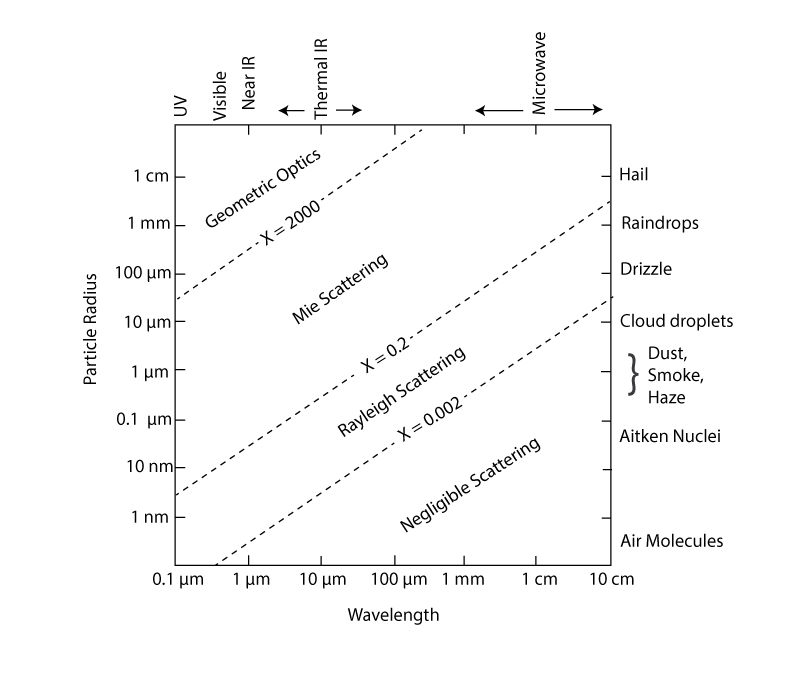 Graph of size parameter x and type of scattering as a function of radiation wavelength and particle radius. Radiation and particle types are shown at the right and top, respectively.
Credit: W. Brune (after Grant Petty)

The effectiveness of scattering depends on the size parameter, which separates different types of scattering. For x > 2000, we have geometric optics. Geometric optics is when the particles get so big relative to the wavelength that we can calculate the interaction of radiation with them using optical principles (think of a lens or prism). For x = 0.2 to 2000, we have Mie scattering. Mie scattering is when the particle size is comparable to the size of the radiation wavelength, such as many atmospheric particles and light, from UV to microwave. For x between 0.002 and 0.2, we have Rayleigh scattering. Rayleigh scattering occurs for particles that are smaller than the radiation’s wavelength. This is the regime for molecules for the UV into the visible and for drizzle and raindrops for radar. Let’s look at its properties. 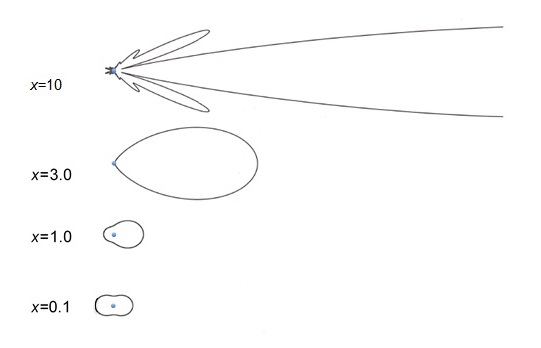 Without going through the math or the reasoning, I will state only that the scattering cross section for a molecule, particle, or raindrop in the Rayleigh regime (x << 1) is proportional to the sixth power of the particle radius and fourth power of the radiation wavelength.

In the Rayleigh regime, this scattering is equally strong in the backward and forward directions, with slightly less scattering in other directions (see figure above).

This strong wavelength dependence of scattering by small particles includes molecules at the wavelengths of visible radiation. This wavelength dependence of scattering leads to the preferential scattering of blue solar radiation compared to red solar radiation, which contributes to the blue of the sky in directions away from the sun and the deep orange-to-red colored sun as it sets. The image below shows both effects in one picture—a yellow-orange sunset below the cloud and a bright blue sky above the cloud.

For radar wavelengths, the r6 dependence of scattering by cloud and rain drops leads to much stronger back scattering of the radar beam with increasing drop size, thus allowing for estimates of raindrop sizes and thus rainfall rates. 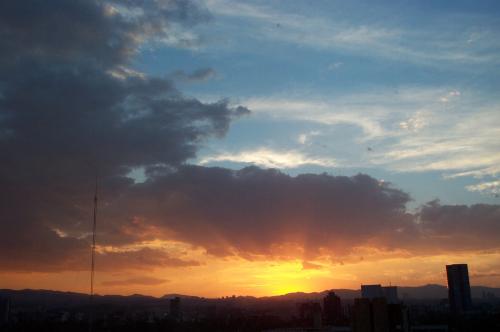 See below for a video (2:09) explaining scattering in greater depth:

Scattering
Click here for transcript of the scattering video.

When you feel you are ready, take Quiz 6-4. You will be allowed to take this quiz only once. Good luck!

‹ 6.11 What happens when we have both absorption and emission in the infrared? up Summary and Final Tasks ›
METEO 300 Fundamentals of Atmospheric Science