Conducting the census by mail

As the population of the U.S. increased, it became impractical to have census takers visit every household in person. Since 1970, the Census Bureau has mailed questionnaires to most households, with instructions that completed forms should be returned by mail. Most, but certainly not all, of these questionnaires, are dutifully mailed—about 72 percent of all questionnaires in 2010. At that rate, the Census Bureau estimates that some $1.6 billion was saved by reducing the need for field workers to visit non-responding households. 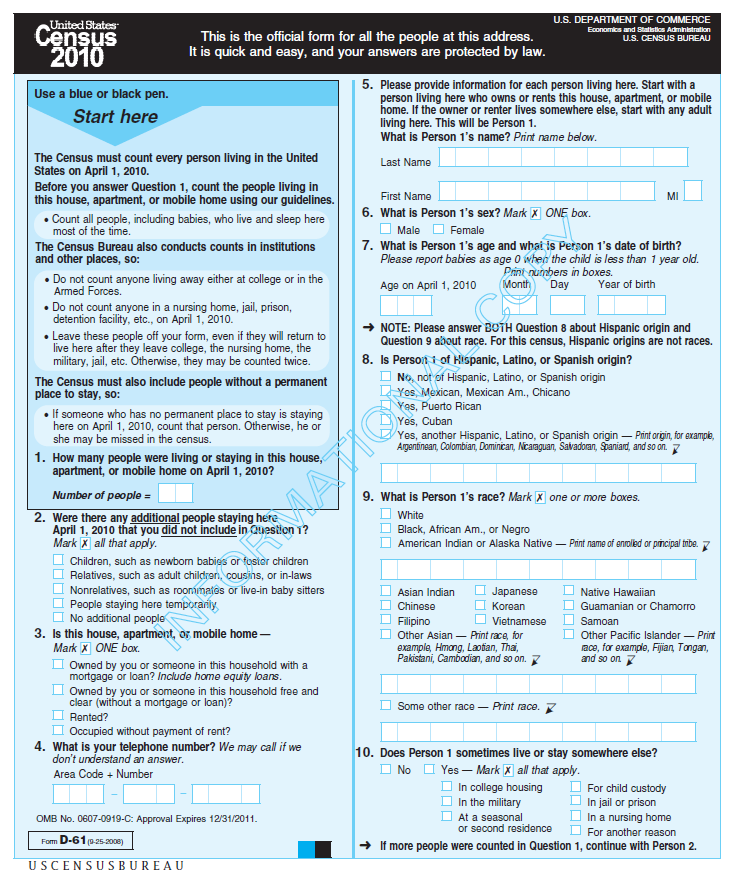 To manage its mail delivery and return operations, the Census Bureau relies upon a Master Address File (MAF). MAF is a complete inventory of housing units and many business locations in the U.S., Puerto Rico, and associated island areas. MAF was originally built from the U.S. Postal Service’s Delivery Sequence File of all residential addresses. The MAF is updated through both corrections from field operations and a Local Update of Census Address (LUCA) program by which tribal, state, and local government liaisons review and suggest updates to local address records. “MAF/TIGER” refers to the coupling of the Master Address File with the TIGER spatial database, which together enables the Census Bureau to efficiently associate address-referenced census and survey data received by mail with geographic locations on the ground and tabulation areas of concern to Congress and many governmental agencies and businesses.

It’s not as simple as it sounds. Postal addresses do not specify geographic locations precisely enough to fulfill the Census Bureau’s constitutional mandate. An address is not a position in a grid coordinate system--it is only one in a series of ill-defined positions along a route. The location of an address is often ambiguous because street names are not unique, numbering schemes are inconsistent, and because routes have two sides, left and right. Location matters, as you recall, because census data must be accurately georeferenced to be useful for reapportionment, redistricting, and allocation of federal funds. Thus, the Census Bureau had to find a way to assign address referenced data automatically to particular census blocks, block groups, tracts, voting districts, and so on. That's what the "Geographic Encoding and Referencing" in the TIGER acronym refers to.

A second motivation that led to MAF/TIGER was the need to help census takers find their way around. Millions of households fail to return questionnaires by mail, after all. Census takers (called “enumerators” at the Bureau) visit non-responding households in person. Census enumerators need maps showing streets and select landmarks to help locate households. Census supervisors need maps to assign census takers to particular territories. Field notes collected by field workers are an important source of updates and corrections to the MAF/TIGER database.

Prior to 1990, the Bureau relied on local sources for its maps. For example, 137 maps of different scales, quality, and age were used to cover the 30-square-mile St. Louis area during the 1960 census. The need for maps of consistent scale and quality forced the Bureau to become a map maker as well as a map user. Using the MAF/TIGER system, Census Bureau geographers created over 17 million maps for a variety of purposes in preparation for the 2010 Census.

The Census Bureau conducted a major redesign of the MAF/TIGER database in the years leading up to the 2010 decennial census. What were separate, homegrown database systems (MAF and TIGER) are now unified in the industry-standard Oracle relational database management system. Benefits of this “commercial off-the-shelf” (COTS) database software include concurrent multi-user access, greater user familiarity, and better integration with web development tools. As Galdi (2005) explains in his white paper, “Spatial Data Storage and Topology in the Redesigned MAF/TIGER System,” the redesign “mirrors a common trend in the Information Technology (IT) and Geographic Information System (GIS) industries: the integration of spatial and non-spatial data into a single enterprise data set” (p. 2).

Concurrent with the MAF/TIGER redesign, the Census Bureau also updated the distribution format of its TIGER/Line map data extracts. Consistent with the Bureau’s COTS strategy, it adopted the de facto standard Esri “Shapefile” format. The following pages consider characteristics of the spatial data stored in MAF/TIGER and in TIGER/Line Shapefile extracts.

Hear more about how the Census Bureau's Geography Division uses MAF/TIGER and related tools to create maps for the 2010 Census.

‹ 1. Overview up 3. Vector Extracts from MAF/TIGER ›
The Nature of Geographic Information