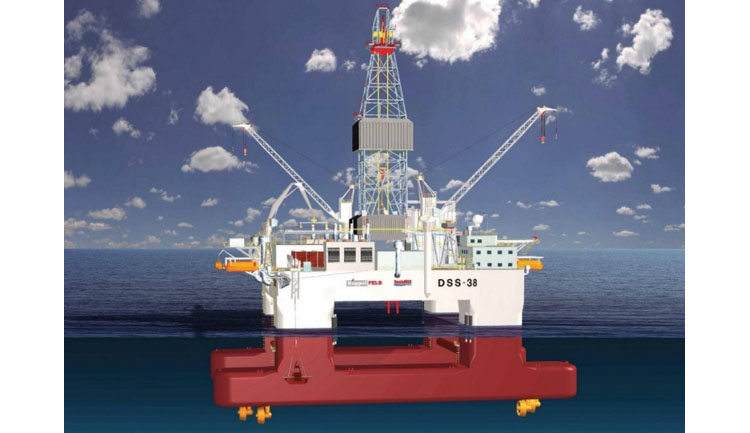 During transport (either self-propelled or towed), the pontoons allow the vessel to float in the water until it is on location. Once on location, water is used as ballast to partially flood the pontoons and columns to allow them to sink to a position below the water level. This is done to create greater stability during drilling operations by adding mass to the vessel and providing it with a deeper draft. The columns provide additional stability to the vessel during drilling operations due to their small cross-sectional area as little wind, wave, or tidal energies are imparted to the columns and the vessel (this is called Wave Transparency). In addition, a system of Thrusters (high energy propellers) is used to control the pitch, roll, and yaw of the vessel and to provide Dynamic Positioning to keep the rig at the same surface location during drilling operations. The thrusters are the yellow devices under the pontoons in Figure 8.12. Semi-submersible drilling rigs are considered to be the most stable of the deeper water MODUs.

I have included a video below, Maersk Drilling - Ultra deepwater semi-submersible rig - Maersk Developer (17:48), showing an animation of a semi-submersible drilling rig. The drilling rig shown in this animation is the Maersk Developer rig, a very modern rig (Note: rigs like this one do exist – this is not a “rig-of-the-future” video.). This is a promotional video, so you may need to overlook its commercial nature. I selected this video clip because it ties together a lot of the concepts that we have discussed in this and past lessons; it shows the interior of the rig; and it discusses many of the rig specifications considered in the design (remember, you as a drilling engineer will need to coordinate with the drilling company for the proper rig specifications when contracting a rig).

In the video, the narrator discusses two concepts that we have not gone over yet, a Riser and a Moon Pool. A Riser is a piece of vertical pipe that attaches to the Tree (see Figure 8.11) and, in the case of a Subsea Tree (a tree that sits on the seabed) extends upward to the water surface. Risers act as conduits for drilling and completion fluids during drilling operations or as conduits for produced fluids during production operations.

A Moon Pool is a hole in the deck of a ship or vessel that allows for communication from the deck to the water surface. I will discuss the moon pool in more detail when we discuss Drill Ships. The rotary system of the drilling rig sits above the moon pool. It is where the drill pipe goes from the rig through the deck and into the water.

Here is the link to the video (17:48) on the “Maersk Developer,” a semi-submersible drilling rig: