Effect of Temperature on the Module's Behavior

In regard to the temperature, when all parameters are constant, the higher the temperature, the lower the voltage. This is considered a power loss. On the other hand, if the temperature decreases with respect to the original conditions, the PV output shows an increase in voltage and power. Figure 2.9 is a graph showing the relationship between the PV module voltage and current at different solar temperature values. The figure illustrates that as temperature increases, the voltage, on the horizontal axis, decreases. Similarly, the relationship between the PV module voltage and power at different solar irradiance levels is shown in Figure 2.10. We can see that the power decreases as temperature increases, as illustrated by lower power peaks on the curves in Figure 2.10. 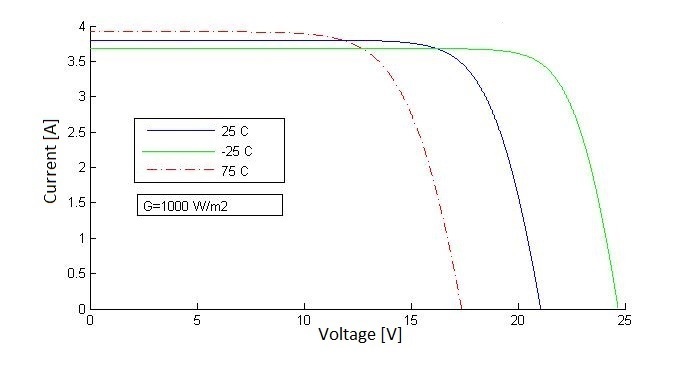 Why do we see increase in current when the temperature increases, as shown in Figure 2.9?

Temperature coefficient are usually provided by the manufacturers and can be measured in terms of voltage change per degree ( V/°C) or as a percentage per degree change (%/°C).

Given these coefficients, how do we calculate the PV output with respect to the temperature change?

In order for us to understand the numerical temperature effects on module, we need to define these two simple equations.

The terms Vstc and Pstc refer to the Voltage and Current taken at STC while the temperature coefficients of the voltage is represented by Vt-coeff and Pt-coeff, respectively.

It should be noted that the reference temperature taken for this calculation is the STC temperature (25°C ) as it appears on the equations.

If the maximum power output of a PV module under STC is 240 W, and the temperature coefficient of power is -2 W/°C, then the module's power output at a temperature of 30°C can be calculated as follows:

As you can see, the sign of the temperature coefficient determines if the parameter is increasing or decreasing with temperature.

ANSWER: One major factor is the cell encapsulation and framing that increase the operating temperature of the PV module. The operating temperature of a module will be a result of the heat exchange between the PV module and the environment. This heat exchange depends on several factors such as ambient temperature, wind speed, heat transfer coefficients between the module and the environment, and the thermal conductivity of the module's body.

According to IEA PV roadmap 2014, c-Si modules have the highest market share compared to other PV technologies such as a-Si. C-Si technologies dominate the global PV market with a share of 90%. In other words, every 9 of 10 PV installation is c-Si modules. If we look closer at the c-Si market, we can see that polycrystalline silicon is the most commonly used technology, according to an EPRI study, with a market share of 60%. This is due to the fact that it is the most efficient in terms of conversion efficiency and economics of scale that make it an affordable solution.

Monocrystalline modules are more area-efficient, but are not the best economical solution.  a-Si modules are more affordable, lighter, and sometimes even flexible, but give poorer yield and required more land area.

There is plenty of optimization to be done in order to choose an ideal PV module for your system. The optimum choice will depend on the location, ambient conditions, and of course, taking into account the budget of the client.