The Transition to the Red Giant Phase for Sun-like stars

Whenever you are considering the physical state of a star, you should separately consider its core (where the temperature and pressure are very high) and its envelope (where the temperature and pressure are substantially lower). The core is where fusion occurs, but the envelope is what we observe, so we have to infer what is going on in the core by observations of the envelope.

The most important concept to recall when studying stars is the concept of hydrostatic equilibrium. When nuclear fusion is going on in a star's core, the pressure created by this process pushes outward and balances exactly the inward pull of gravity. The first stage of the evolution of a star is the Main Sequence stage, and this accounts for approximately 80% of the star's total lifetime. During this time, the star is fusing hydrogen in its core. The star's color (a measurement of its surface temperature) and luminosity only change slightly over the course of its Main Sequence lifetime as the rate of nuclear fusion changes as the star slowly converts hydrogen to helium. When the star initially begins fusing hydrogen it is said to be on the Zero Age Main Sequence (ZAMS). Over a star's Main Sequence lifetime, as it fuses hydrogen into helium, its outer envelope will respond to slow internal changes, so its position in the HR diagram is not completely fixed. For example, we expect our Sun to brighten and its color to vary slowly over its roughly 10 billion year lifetime on the Main Sequence. By the end of its Main Sequence lifetime, it will be approximately twice as luminous as it is now!

When any star has used up the majority of the hydrogen in its core, it is ready to leave the Main Sequence and begin its subsequent evolution. From here on out, we will be considering the post-Main Sequence evolution for different types of stars. During the Main Sequence phase, core hydrogen fusion creates the pressure (in the form of radiation pressure and thermal pressure) that maintains hydrostatic equilibrium in a star, so you should expect that when a star's core has become filled with helium and inert, the star will fall out of equilibrium. As the total pressure decreases, gravity will once again dominate, causing the star to begin to contract again. You should be able to predict that when a stellar core contracts, its temperature will increase. So the star will continue to generate energy in its core, even when core hydrogen fusion ends, through the gravitational contraction of the core. Although fusion has turned the hydrogen in the core into helium, most of the outer layers of the star are made of hydrogen, including the layer immediately surrounding the core. Thus, when the core reaches a critical density and temperature during its contraction, it can ignite hydrogen fusion in a thin shell outside of the helium core. The helium core will also continue to generate energy by gravitational contraction, too. If you think of the Main Sequence as the “hydrogen core fusion” stage of a star's life, the first stage after the Main Sequence is the hydrogen shell fusion stage. During this stage, the rate of nuclear fusion is much higher than during the Main Sequence stage, so clearly the star cannot stay in this stage as long. For a star like the Sun, it will only remain in this stage for a few hundred million or a billion years, less than 10% of the Sun's Main Sequence lifetime. 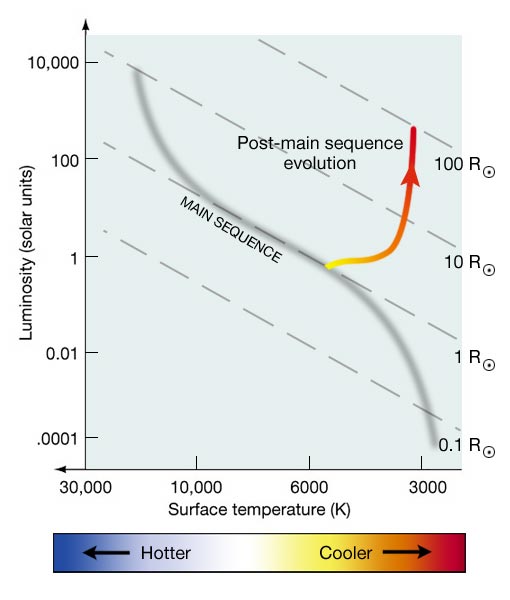 Figure 6.1: The evolutionary track on an HR diagram for a Sun-like star as it leaves the Main Sequence, cools off and gets redder as it evolves to the red giant phase.
Credit: Penn State Astronomy & Astrophysics

If you look at the dashed lines in this HR diagram, they represent lines of constant radius. When a star has reached the tip of the red giant branch (the highest point in luminosity on the track above), it has a radius of approximately 100 solar radii. There are several well known red giant stars even larger than this, which have radii of several hundred solar radii. The immense growth expected in the Sun when it becomes a red giant will cause its radius to swell from roughly 1 AU to perhaps 2 AU or so. This means that Mercury and Venus will definitely be engulfed by the Sun, and the Earth and Mars are likely to be engulfed as well. The core of the Sun when its envelope is 1 AU will only be of order 10 Earth radii, or a factor of more than 2,000 times smaller than the radius of the envelope.

Compare the illustrations below: the first shows the Sun as a red giant and compares it to the Sun at its current size (Fig. 6.2), and the second shows the measured size of Betelgeuse (Fig. 6.3).

Figure 6.2: The Sun as a red giant
Source: Wikimedia.org
Figure 6.3: A Hubble Space Telescope image that resolves Betelguese into a disk and shows how its current radius is larger than Jupiter's orbit around our Sun.
Source: Hubblesite

Your naked eye is not usually capable of making out the color of stars. One exception to this, though, is for the very bright red giant stars. If you are not already familiar with the night sky, find the following stars in Starry Night, and then try to find them by eye in your night sky. Note their color compared to the other stars visible in the sky (note, not all of these are visible at all times of year):

In Lesson 5, you learned that the Main Sequence is a sequence in mass. That is, the hottest, brightest stars (O, B type) on the Main Sequence are also the most massive stars. The coolest, faintest (K, M type) stars on the Main Sequence are the least massive. Therefore, just by locating a star's position on the Main Sequence in the HR diagram, we can infer a reasonable estimate for its mass. All stars go through a red giant phase and wind up in the same general location in the HR diagram. Thus, we cannot infer the mass of a red giant star simply based on its location in the HR diagram. The track presented above is appropriate for Sun-like stars, but for more massive stars, their evolution proceeds a bit differently. After the red giant phase, the evolution of stars depends much more strongly on their initial mass, so we will have to consider stars of different masses separately from here on out. We will finish our discussion of Sun-like stars before we move into a discussion of more massive stars, like Betelgeuse.

‹ Overview up The Final Stages of the Evolution of a Sun-like Star ›
ASTRO 801: Planets, Stars, Galaxies, and the Universe