In the previous lesson, you learned about the existence of binary stars, and you were asked to speculate on the evolution of binary stars. We are going to return to this topic and study the consequences of mass transfer in binary systems.

In the image below, a calculation of the 3D shape of the Roche Lobes for a binary star system and the 2D projection of the 3D volume is presented. The L1 point is labeled.

If you have two stars that are both smaller than their Roche Lobes, then that type of binary is referred to as a detached binary, and the stars will not have a direct influence on each other's evolution. However, if one of the stars grows large enough that it fills its Roche Lobe, then the shape of that star will become distorted, and mass can be transferred from the distorted star through the L1 point to the companion star in the binary. This system is referred to as a semi-detached binary. Mass transfer in these types of binary star systems is an active research area at Penn State.

The Chandra X-Ray Observatory has a nice animation of a binary star system evolving from a detached to semi-detached state.  (Quicktime movie, which may not play in all browsers)

An animation of the stages in the evolution of the Algol system is available from Professor Michael Gallis of Penn State Schuylkill. It shows:

There is one additional possibility we can address: If both stars in a binary fill their Roche Lobes, then mass from both stars will not be gravitationally bound to one star or the other, but instead the two stars will be surrounded by a "common envelope" of gas. This is referred to as a common envelope or contact binary. 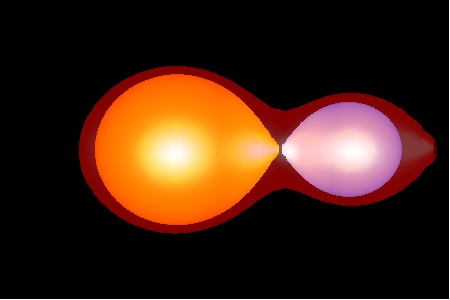 Figure 6.12: Simulated image of a contact binary. A simulated image produced by Wolfram Demonstrations project of a contact binary where the two individual stars are surrounded by an envelope of gas completely enclosing the system and the two stars are also distorted and are touching at the L1 Lagrangian point.
Credit: Image created with Mathematica - Wolfram Demonstrations Project

Because binary star systems can transfer mass between the stars in the pair, this can alter the evolution of the stars in the binary and give rise to new types of stars and new stellar phenomena beyond the ones we have studied so far. For example, when a white dwarf is bound to another star in a binary star system and mass streams from the companion star towards the white dwarf, it can accumulate in a disk (called an accretion disk) that surrounds the white dwarf. 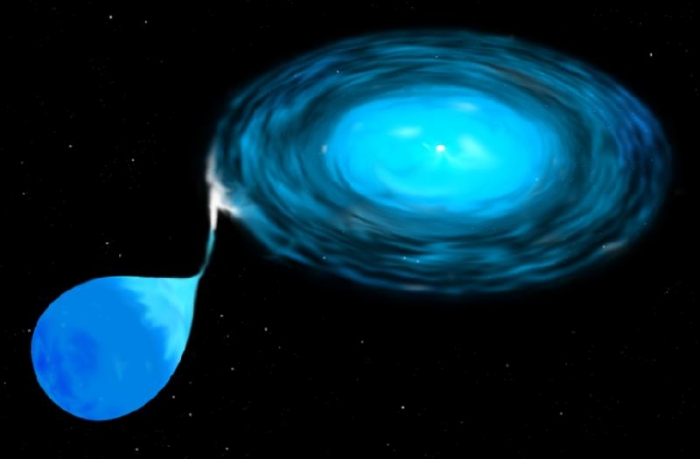 If a nearby companion dumps matter onto a white dwarf in this way, suddenly the hot, carbon/oxygen white dwarf is covered in a layer of new fuel, since the accreted matter will contain mostly hydrogen. The white dwarf is so hot that it can cause the hydrogen shell to undergo nuclear fusion similar to the process by which the degenerate core in a red giant creates a helium flash. When the hydrogen shell ignites in this manner, the fusion occurs explosively, and the star brightens by up to 1 million times its normal luminosity in a very brief time. We call this explosion a nova. In some systems, this process can happen over and over again, creating “recurring novae” explosions. Below is an example of a recurring nova imaged by the Hubble Space Telescope.

Figure 6.14: The prolific number of eruptions by the recurrent nova T Pyxidis has attracted the attention of many telescopes.
Credit: Hubblesite

The word nova comes from the Latin "nova stella" or new star, because if a white dwarf near enough to Earth undergoes a nova explosion, we can see a naked eye star where previously there was no star. For example, below is an image of a "new star" or nova that was visible to the naked eye in 1999.

Figure 6.15: A bright nova was discovered in 1999 that was at that time visible to the unaided eye in southern skies.
Credit: APOD

Novae are not the only possible end states for white dwarfs accreting matter from their companions. If a massive white dwarf near the Chandrasekhar limit accumulates too much mass from its companion by way of accretion, it can explode as a “Type Ia” supernova. Because electron degeneracy pressure cannot support a star with a mass > 1.4 solar masses, a white dwarf that accumulates enough mass to raise it above this limit will also explode violently. The amount of light given off during a Type Ia supernova is very similar to that of a Type II core collapse supernova. However, the spectrum of this light is very different. The stars that create Type II supernovae still contain hydrogen, so we will see evidence for hydrogen in the spectrum of a Type II supernova. Since white dwarfs do not contain any hydrogen, the spectra of supernovae created when they explode will not exhibit any hydrogen lines. These types of supernovae have been in the news recently because of their utility in the study of cosmology, and we will revisit them in a later lesson. In early 2014, the nearest and brightest Type Ia supernova was discovered, and it was visible to even backyard telescopes and binoculars. More information about Supernova 2014J in the galaxy M82 is available at many sources, including Sky & Telescope magazine.

There are many other stellar phenomena (e.g., "X-ray bursters") and stellar types (e.g., "blue stragglers") that are either known to be or are speculated to be the result of mass transfer in binary star systems. We will look at several more examples beyond the novae and type Ia supernovae described on this page.

‹ The Evolution of Massive Stars and Type II Supernovae up Neutron Stars and Pulsars ›
ASTRO 801: Planets, Stars, Galaxies, and the Universe