Before we go any further, let me note that Penn State teaches an entire face-to-face course on black holes (ASTRO 130) at the University Park campus. While it is true that most of the topics we will cover in ASTRO 801 can be elaborated on much more than I have the time or space for in this course, I think this is especially true of the topic of black holes. So, while we are going to address them here, I think that, in particular with this topic, if you want more detail, you should consider following up with additional reading and study beyond what is in the course on this page.

On the ASTRO 130 website, Professor Brandt lists the required reading and suggested reading on this topic, and you can certainly do well starting there with his recommendations.

In the case of the most massive stars (maybe only stars more massive than say, 25 or even 50 solar masses), not even neutron degeneracy pressure can stop the collapse of the core. In this case, at least 3 solar masses worth of matter collapses into a single point with infinite density. This point is referred to as a singularity. At a distance of approximately 9 km from the singularity is a spherical region at which the escape velocity is exactly equal to the speed of light. What this means is that any object that reaches this distance from the singularity (usually referred to as the event horizon or Schwarzschild radius) can never escape, even if it were moving at the speed of light. Thus, even light cannot escape from this object, and it is for this reason we call it a black hole.

You can calculate the size of the event horizon for a black hole in the following way:

For an object of mass :

Watch out for this misconception!

If you have seen just about any science fiction movie that mentions black holes, you probably picture a giant space vacuum cleaner sucking material into some vast whirlpool. There is actually a nice short bumper sticker saying you should keep in mind from here on out: Black Holes don't suck!

Black holes have mass and exert gravitational force on their surroundings, just like every other mass in the Universe. They do not have some special force that allows them to suck nearby stars into their event horizon. What is peculiar about black holes is that they are the only objects where their event horizon is outside their physical boundary, and when you get near this boundary, strange physical effects occur because of the strong gravitational field associated with these objects.

For more, you can get the "Bad Astronomer's" (Phil Plait's) list of 10 things you don't know about black holes.

One of the consequences of general relativity is that it requires that space be curved in the vicinity of large masses. This means that if a photon of light passes close to the Sun, for example, it will not continue in a straight line, but it will be deflected by a small amount (see www.astronomynotes.com for a more detailed explanation). Another prediction of general relativity is that when light is emitted by a massive object, it should be redshifted. That is, a photon of light feels a gravitational attraction to the massive object, and it must expend some of its energy in order to escape from the object. Because the energy of a photon is proportional to its wavelength or frequency (remember, UV photons carry more energy than IR photons, for example), when the photon loses energy, it gets redder. This is the gravitational redshift, and it is different from the Doppler effect redshift we have studied earlier.

General relativity predicts that these strange effects (such as the deflection of starlight near a massive object, or the gravitational redshift) will be stronger when a photon of light encounters a stronger gravitational field. Thus, it is difficult to measure these effects for the Sun, for example, but in theory they should be easier to measure in the vicinity of a black hole.

One of the astronomers responsible for Astronomy Picture of the Day has produced a number of simulations of what you might see near a black hole because of the strong relativistic effects, called Virtual Trips to Black Holes and Neutron Stars:

Can you see the "Einstein Ring" effect?

There are a number of additional effects that an observer investigating a black hole from near its event horizon will experience. Two of these include:

There are many additional questions you and your students are likely to have about black holes. For two excellent resources presented in FAQ format, see:

From an astronomer's point of view, beyond these thought experiments about the nature of black holes, the questions we are often more interested in are: How might we detect these objects and how do they influence their environments? The first question you might ask is, have we ever directly detected a black hole? Below is an artist's illustration of one of the primary candidates. 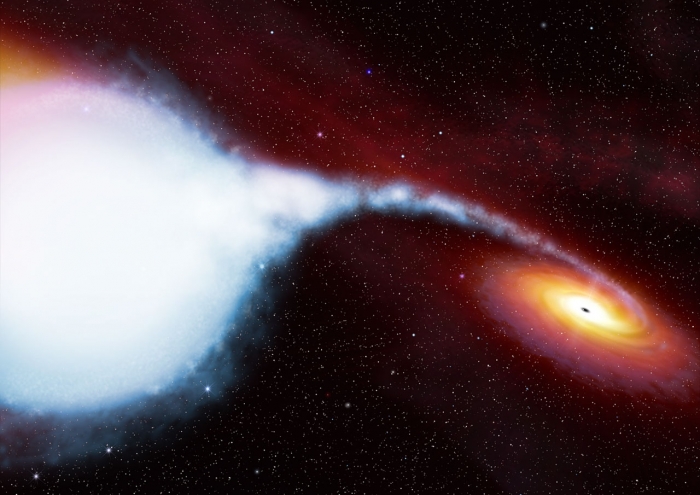 Figure 6.17: Illustration of Cygnus X-1 black hole binary, which shows a massive star streaming matter onto a small, unseen companion, creating an accretion disk around the companion.  In this case, the companion is believed to be a black hole.
Credit: ESA / Hubble Space Telescope

We have found binary star systems where an O star (with a mass of approximately 25 solar masses) is orbiting a companion that has a mass of 6 - 10 solar masses. However, the companion does not appear to emit any of its own light. Theoretically, neutron stars should not be able to survive with masses greater than about 3 solar masses. So, if a binary star system contains an unseen companion with a mass of more than 3 solar masses, it may be a black hole. A handful of such objects exist. The most famous is an object called Cygnus X-1 (shown in the illustration above), which has even had a song written in its honor ("A Farewell to Kings—Cygnus X-1" by Rush). To investigate Cygnus X-1 and some of the effects described previously, there is an online, interactive tool for younger students who want to investigate black holes: "Black Holes: Gravity's Relentless Pull," created by the folks at hubblesite.org.

How well were the concepts described above reproduced in these animations?
‹ Neutron Stars and Pulsars up Additional Resources ›
ASTRO 801: Planets, Stars, Galaxies, and the Universe