For stars less than approximately 8 solar masses, the remnant of the core that is left behind after stellar evolution is complete is the white dwarf. Since the Chandrasekhar limit is 1.4 MSun, this means that the more massive stars in the range of, say, 4 - 8 MSun must lose most of their mass so that the white dwarf they leave behind is less than this limit. We have seen that we expect massive stars to explode in core collapse supernovae, and that white dwarfs in binary systems may also explode in supernova explosions. The next logical question to address is: What remnant is left behind (if any) after these supernova explosions? When the core of a star collapses at the beginning of a Type II supernova explosion, a neutron star is created. Neutron stars are the second type of compact object we will study in this course.

Inside the iron core of a high mass star, the electrons cannot exert enough electron degeneracy pressure to resist the collapse. Therefore, the electrons get compressed to the point that they merge with the atomic nuclei in the core of the star. This inverse beta-decay reaction between electrons and protons creates both neutrons and neutrinos (this is the source of the neutrinos that helped blow off the outer layers of the star in the supernova explosion). When the neutrons have been created, they begin to resist further compression, exerting “neutron degeneracy pressure,” which halts the collapse of the core.

The remnant of the core has become essentially one giant atomic nucleus made up of neutrons. The typical size of an object of this sort is only about 10 kilometers in radius, but it can contain more than 1.5 solar masses of material. If you calculate the density of a neutron star, it is astounding—one sugar-cube-sized lump has a mass of half a trillion kg, which weighs about 1 trillion pounds in Earth's gravity. You may be curious to know the equivalent of the Chandrasekhar limit for neutron stars. That is, what is the mass limit above which even neutron degeneracy pressure is not strong enough to resist gravitational collapse? There is no easy answer to this question, though. The best estimates are that neutron stars have an upper mass limit of about 3 MSun, but that value is uncertain.

The first white dwarf star to be observed was Sirius B when it was resolved and separated from its companion (Sirius A) in the 1860s by Alvan Clark. If you want to make the same comparison and ask when the first neutron star was observed optically, the answer is in the 1990s by the Space Telescope. The image is below. However, this was not the first neutron star known. That discovery was made in the 1960s using observations in a different part of the electromagnetic spectrum. 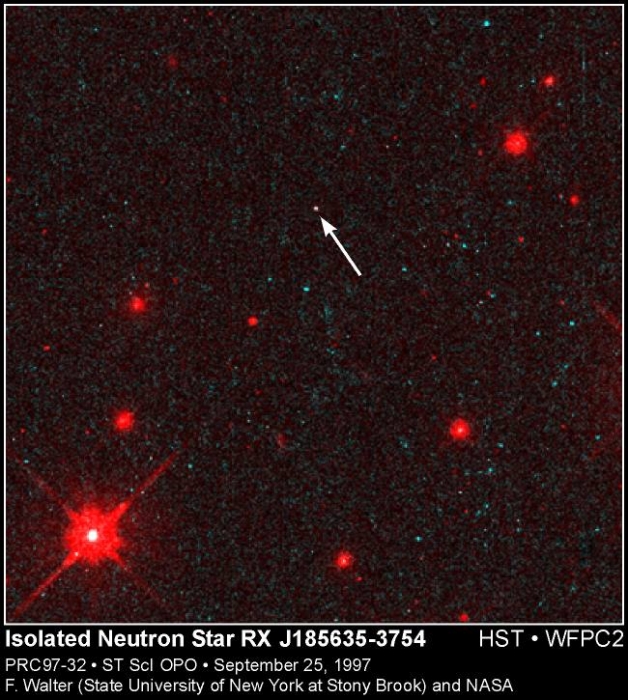 There is another peculiar property of neutron stars beside their density, and that is their rotation rate. Conservation of angular momentum tells us that the rate of angular velocity (how fast an object spins) multiplied by its radius is a constant. The best analogy for this physical effect that you are probably familiar with is that of a spinning ice skater. If the skater starts to spin with his or her arms outstretched, they will spin slowly. However, when they pull their arms in (and thus decrease their radius), they will spin faster. We have already discussed at least one context where stars work the same way, that is, during the collapse of a molecular cloud to create protostars. However, conservation of angular momentum is also relevant to neutron stars; before a star explodes when it has an enormous radius, it might rotate once per month. When it collapses down into a neutron star with a radius of 10 km, it will spin up so that it now rotates once per second.

Because of their small size, neutron stars do not radiate much thermal energy (remember L = 4π R2 σ T 4, regardless of how large T is, if R is only 10 km, L will be quite small, too). They are, therefore, not bright enough to be plotted on an HR diagram. However, neutron stars do produce light through a different mechanism, which gets emitted out of two spots: one near the North magnetic pole and one near the South magnetic pole of the star. As the star spins once per second, the two spots appear as twin, rotating beams of light, similar to the light from a lighthouse on Earth. If we happen to be in the path of the beams, we detect a “pulse” of light from the neutron star. The first neutron stars to be detected were observed by radio telescopes as regularly repeating pulses of radio light with periods of about 1 second. These objects are called pulsars, and they happen to be the neutron stars oriented such that the Earth lies in the path of their lighthouse beam.

The story of the discovery of pulsars is a very interesting one. A female graduate student at Cambridge University named Jocelyn Bell was using a new radio telescope to study the way in which radio waves from distant objects “twinkled.” During her study, she identified several regularly repeating radio signals from celestial objects with periods of about 1 second. Originally, she considered that the signals might even be from extraterrestrial civilizations, so the objects were labeled “LGM” for little green men. However, it was soon realized that these might be neutron stars, and this hypothesis has since been supported with much additional evidence. Jocelyn Bell's thesis adviser, Anthony Hewish, was awarded the Nobel Prize for the discovery of pulsars. Many people believe that Jocelyn should also have been awarded the prize because of her central role in the discovery. If you would like to read more of this story, I encourage you to read Jocelyn's own version:

Recall that the accretion of matter on a white dwarf in a binary system can lead to either a nova explosion or a supernova explosion. The next question is: What happens to neutron stars or pulsars in binary systems? There are two possibilities that are not necessarily exclusive. That is, one system can exhibit both behaviors.

A few final notes on neutron stars and pulsars:

We will not discuss "gravitational waves" as a separate topic in this course. However, this is an area of frontier research where the first direct detection was announced in February, 2016. Prior to this, the first indirect evidence for gravitational radiation came from the discovery of the binary pulsar system, PSR 1913+16, and pulsars are likely to continue to play a role in this growing field. There are several places you can go for more information: