One technique for studying galaxies that astronomers have been using with modern, space-based observatories is to take deep fields. The longer you leave the shutter of your camera open while pointing at a particular part of the sky, the fainter the objects you will be able to see. In astronomical jargon, the fainter the faintest object in your image is, the "deeper" the image. In 1996, Hubble released the "Hubble Deep Field," which was a revolutionary image in its day. It is reproduced below. 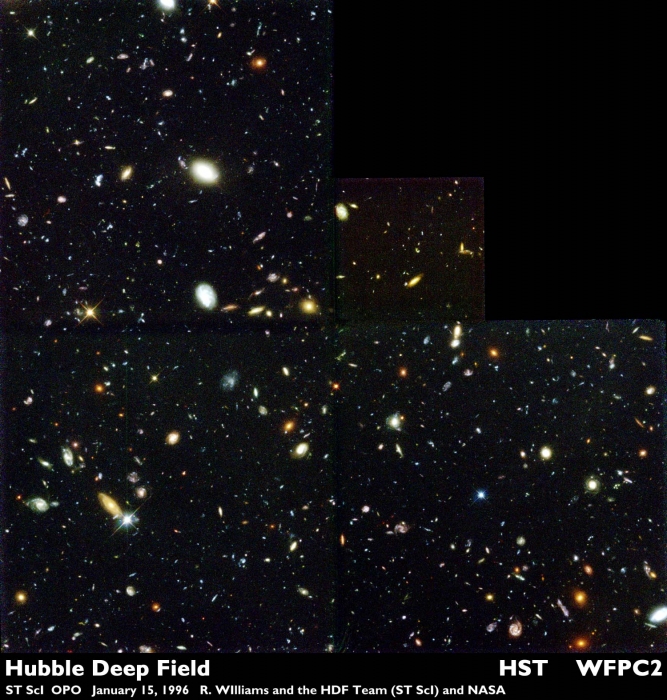 If you look closely, the few objects with spikes on them (a white one near the lower left and a yellow one on the center-left) are stars in the Milky Way Galaxy, but every other object in this image is a distant galaxy. Thus, by taking a deep field, astronomers are presented with an excellent representative sample of the types of galaxies in the universe. We will return to the Hubble Deep Field for Lab 3.

For the most part, all of the galaxies that we observe locally, and that we find in deep fields, are normal galaxies. They contain billions of stars, clouds of gas, and dust. When we take a spectrum of the integrated light from the entire galaxy, it looks like the sum of the light from a large group of stars. Remember, stars have spectra that are very similar to blackbodies, but with absorption lines. So, for the most part, a galaxy's spectrum looks like a blackbody spectrum, but also with a lot of absorption lines.

How do these spectra appear? How are they similar to each other?

At the same time that astronomers were spending much of their time studying galaxies and classifying them, several astronomers were finding peculiar objects unlike many of the other galaxies. One type of peculiar galaxy, identified by astronomer Carl Seyfert, had the following properties that were unique compared to the average galaxy:

The extra luminosity from these “Seyfert Galaxies” comes almost entirely from the nuclear region of the galaxy, not from all areas of the galaxy equally. In general, any galaxy that shows evidence for a source of radiation that is not being created by stars is called an active galaxy. Because the non-stellar light from these galaxies is concentrated in the nucleus, they are usually called Active Galactic Nuclei or just AGN. Below is a sample image of a Seyfert galaxy, and it is a particularly nice example where it is quite obvious how much brighter the bulge region is compared to some of the other spiral galaxies you have seen previously. 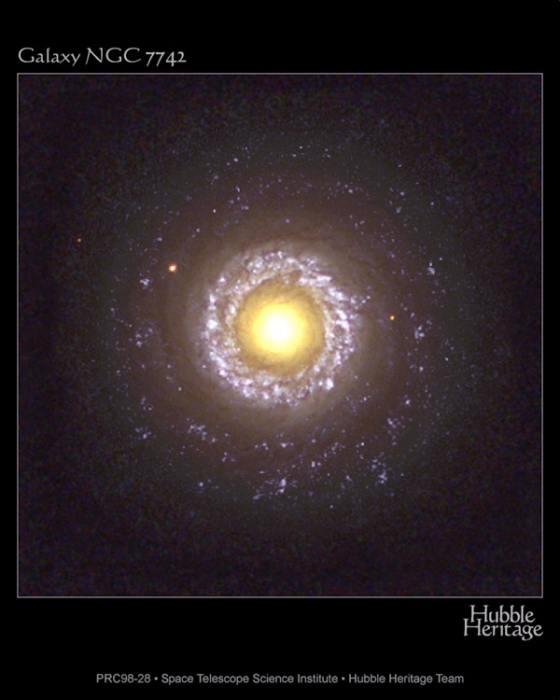 AGN are bright radio and x-ray sources. In particular, in the radio, the galaxies show narrow jets of plasma being ejected out of the galaxy at high speeds, which end in extremely large lobes of bright radio emission. Remember, in the optical, the extent of the Milky Way is something like 30,000 parsecs in diameter. In general, the distance from lobe to lobe in a radio galaxy can be several hundred thousand parsecs, and the two largest are 4 million and 6 million parsecs from lobe to lobe! The National Radio Astronomy Observatory has spent more than 50 years studying AGN and has a large archive of images from their observations of these objects. For example, see:

There are many different types of galaxies that are called AGN, but broadly speaking, astronomers have separated them into three main classes with the following properties:

See for yourself the spectra of active galaxies (AGN). The Sloan Digital Sky Survey had as one of its major science goals the discovery and study of a large number of quasars. Identical to the data on the normal galaxies, in the window of data on each SDSS object, click on the thumbnail image of the spectrum in the lower left to bring up a full sized image of the spectrum.

How do these spectra appear? How are they similar to each other? How do they differ from the galaxy spectra you studied above?

If you want to explore more objects beyond the few listed here, you can bring up all of the SDSS objects from a single observation with the Plate Explorer.

A question that astronomers asked, and a question you should be asking yourself now, is: What is the source of the difference between normal galaxies and active galaxies?

When matter gets close to a SMBH, it will swirl around the SMBH, and we expect this to create a disk of material around the SMBH. This is exactly analogous to the accretion disks we considered when we studied binary star systems. We believe that in many ways they look similar. As shown below, the material in this disk falls into, or accretes onto, the SMBH. As the material swirls closer and closer to the SMBH, it speeds up. Friction among the particles in the disk causes the gas to heat up, and it can reach temperatures of millions of kelvin. These disks full of hot, fast moving gas emit radiation, and the amount is large enough to power quasars and other AGN.

The jets that we see in radio galaxies and quasars are likely to come from the disk, too, but these are not well understood at all. It is thought that the disk helps to “focus” the jets (see the image above for an example), but the exact mechanism of the creation of the jet and how it stays so narrow over such large distances (a few hundred thousand parsecs) is a topic of ongoing research.

The Milky Way has an SMBH in its core, but the Milky Way is not an AGN. So, clearly, just the presence of an SMBH alone cannot be the only requirement for the creation of an AGN. The answer to this again rests with the accretion disk. The accretion disk fuels the central power source in AGN, and if there is no fuel or not enough fuel, then the galaxy will not be seen as an AGN. When we look at AGN in detail, it appears that many of them appear to show evidence for the host galaxy absorbing another galaxy. This act of galaxies merging with each other can funnel gas into the core, providing ample fuel to power the SMBH.  This idea does imply that AGN will "shut off" over time as they run out of fuel.  In 2016, Penn State astronomer Jessie Runnoe and her collaborators discovered a quasar that appears to have run out of fuel in between observations!

‹ Hubble's Tuning Fork and Galaxy Classification up Where do Galaxies Live? ›
ASTRO 801: Planets, Stars, Galaxies, and the Universe