Since Hubble's work on galaxies in the 1920s, astronomers have continued to observe more and more galaxies at larger and larger distances from us. The goal of much of this work has been to determine the mechanism by which galaxies form and how they evolve. For example, one of the major undertakings of the astronomical community in recent years has been the Sloan Digital Sky Survey. If you read the "The SDSS Science Legacy," they say that their team was responsible for:

Systematic characterization of the galaxy population: By providing high quality images, distances, and stellar masses and ages of hundreds of thousands of galaxies, the SDSS transformed the study of galaxy properties and the correlations among them into a precise statistical science, yielding powerful insights into the physical processes that govern galaxy formation.

When we studied stars, we saw that using star clusters, which contain stars in various stages of evolution but all of the same age, astronomers were able to construct and verify a model for the evolution of stars. In order to do the same for galaxies, you would like the same set of information. You would like to find galaxies of different ages so we can see how galaxies change over time. We can certainly use our own Milky Way and the Local Group galaxies as examples of old galaxies, but we need a sample of young galaxies for comparison. To find young galaxies, what we need to do is identify very distant galaxies. The reason distant galaxies = young galaxies is the finite speed of light. If you observe an object 1 million light years away, you are not seeing it as it is today. The light you see today left the object 1 million years ago. This phenomenon is called the lookback time. So, if you want to find a galaxy 5 billion years younger than the Milky Way, you should search for galaxies 5 billion light years away. Then, you can compare those galaxies to the ones you find 10 billion light years away, because those will appear as they were 10 billion years ago.

NOTE: At the large distances we are now considering, there is ambiguity in exactly what we mean by distance. We will discuss this more in the cosmology lesson. For now though, keep in mind that the more distant the object, the earlier in its history we are seeing that object.

The phenomenon of lookback time is crucial to the study of galaxy formation and evolution. We can directly observe how galaxies appeared when they were forming if we can find galaxies at very large lookback times. In recent years, astronomers have been using the technique of observing deep fields (like the Hubble Deep Field you've seen previously, and more recently, the Hubble Ultra Deep Field) to pursue the most distant galaxies in the universe. The question that these deep fields have helped answer is: “How did galaxies look billions of years ago?” The answer appears to be that when galaxies were young, they looked very irregular. Galaxies with spiral arms like the Milky Way did not appear until about 10 billion years ago. We think that galaxies apparently formed from the bottom up; that is, more than 10 billion years ago, small, irregularly shaped sub-galaxies appear to have collided and merged, leading to the formation of the large spiral and barred spiral galaxies that we see today. Although the Milky Way continues to form new stars today, the star formation rates in these subgalaxies were much higher. Observations suggest that the peak of star formation occurred about 8 billion years ago. Below is an image of several very distant, and therefore very young, galaxies observed in the Hubble Ultra Deep Field. Compare these to the images of nearby galaxies that you have seen previously. 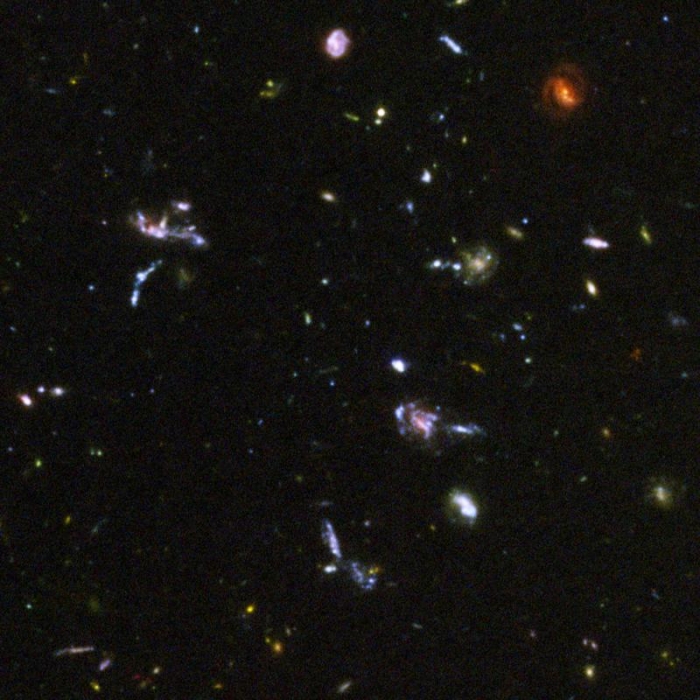 By comparing local galaxies to distant galaxies and supplementing these observations with numerical simulations of the early universe, astronomers believe that galaxies form in roughly the following way:

In this general prescription for the evolution of galaxies, we did not fit AGN into the scenario. The AGN phase appears to be a short phase in the overall lifetime of a galaxy, and it occurs when the SMBH in the core of that galaxy has enough fuel to power the enormous luminosities these objects emit. Again, using lookback time, we see that quasars are most numerous about 10 billion years ago. So, the quasar phase appears to be an early phase that perhaps most galaxies went through before settling down as normal galaxies.

‹ Galaxy Interactions up The Distance Ladder ›
ASTRO 801: Planets, Stars, Galaxies, and the Universe