Remember from our lesson on stars in the Milky Way, that, on average, inside of a galaxy, the stars are separated by vast distances. However, on average, in the universe, galaxies are only separated by about 20 times the size of the diameter of the average galaxy. In all galaxy environments, we see examples of galaxies apparently in the process of interacting with each other. In fact, if you look back closely at all the images of galaxies that you have seen so far (the Hubble Deep Field, images of the Virgo Cluster, etc.), I am sure that you can pick out examples of galaxies that appear to be right on top of each other.

So, what happens when galaxies do encounter each other? There are a few quantities that control the interaction:

In general, there are three different types of interactions that fall into the following rough categories:

When two nearly equal mass galaxies with small relative velocities pass very close to each other, or even right through each other, a major merger occurs. If the galaxies are moving too fast relative to each other, a major merger is unlikely to occur, because the collision will not slow the galaxies down enough. For this reason, major mergers do not often occur in the cores of galaxy clusters. Instead, we find that they occur in loose groups (e.g., the Milky Way and Andromeda appear to be on a path to collide several billion years from now), compact groups, and in the lower density outskirts of galaxy clusters.

If you look at images of the most well-known example, NGC 4038 and NGC 4039—the Antennae Galaxies—you will get a sense for what happens in one of these collisions. 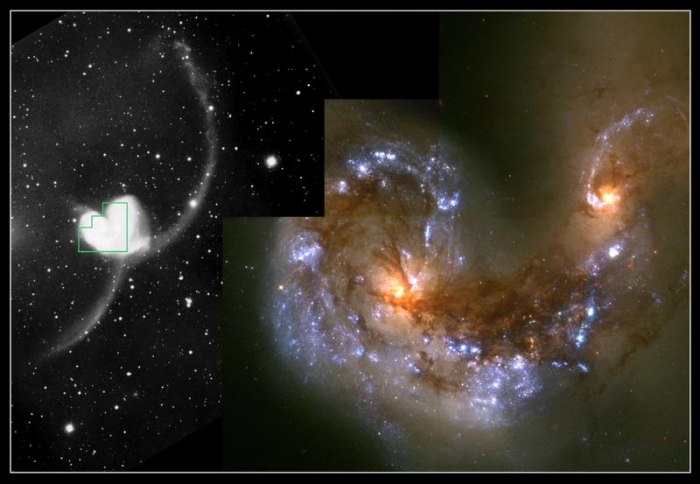 We estimate that the complete process of an interaction between two galaxies takes about half a billion years. For this reason, when we see an example of two interacting galaxies (like the Antennae Galaxies), we are only seeing a snapshot of one stage of the evolution of the interaction. In order to get an understanding of the entire process of the interaction between two galaxies, astronomers have used computer models to simulate what happens when two realistic representations of galaxies collide.

Watch this movie of a computer simulation of the interacting galaxies known as the "Mice."

Next, watch this movie of a computer simulation of two interacting spiral galaxies seen from different points of view.

To explain the physics of the Mice movie, what you saw were two spiral galaxies approaching each other. Recall that we believe that both of these galaxies are enclosed in large halos of dark matter. When their dark matter halos collide, this produces drag, slowing the galaxies down and altering their paths so that the cores of the two galaxies spiral ever closer to each other and eventually merge. This drag is referred to as dynamical friction.

Another effect that you see in the simulation is that when the disks first interact, the shape of the galaxies is altered. What is happening is similar to the interaction between the Earth and the Moon. The stars in both galaxies feel a tidal gravitational force from the other galaxy. The outermost stars in these galaxies feel the weakest gravitational pull from the center of their parent galaxies, so they get pulled out of their parent galaxy by this tidal force and spray out into long tails that are larger than the original galaxies themselves. What is happening is that the energy that the galaxies had as they moved through space has been converted into kinetic energy of the stars in the galaxies. These stars get a “kick” to a higher velocity, which puts them on an orbit that takes them much farther from the center of the galaxy than their original orbit.

One very interesting point to note about these collisions between galaxies is that no stars actually collide! Although the process of a galaxy collision rearranges the stars into new structures (first tidal tails and eventually into an elliptical galaxy), because the space between stars is so large, it is extremely unlikely that even one single star had a direct collision with another star during this process.

During the interaction/merger process, however, the gas clouds in the disks of the two galaxies get compressed by the tidal forces of the interaction. If you recall our study of star formation, stars form out of gas clouds that get compressed by some external force. In galaxy collisions, most of the gas in the two galaxies gets compressed all at once, which can trigger huge bursts of star formation simultaneously. For example, look at the image of the Antennae Galaxies again.

All of the bright blue areas in the image on the right (taken by Hubble) are huge clumps of new stars formed within the past 10 million years or so. We call galaxies that are undergoing a massive amount of star formation Starburst Galaxies, and it appears that most starbursts are caused by galaxy interactions.

Major mergers between two galaxies is a topic we could explore in significantly more depth than we have the space to do here. If you wish to explore the topic in more depth on your own, you can choose any or all of the following topics and resources:

When a massive galaxy has smaller satellite galaxies orbiting it, the massive central galaxy can disrupt and then absorb the stars from its smaller companions. Many of the satellite galaxies in orbit around the Milky Way and Andromeda in the Local Group appear to be undergoing this process to one degree or another. We find, for example, that as the Sagittarius dwarf galaxy has orbited the Milky Way, the tidal force from the Milky Way has pulled out long debris trails from Sagittarius that completely encircle the Milky Way. Over time, the stars that originated in the Sagittarius dwarf are being absorbed into our Galaxy's halo, and eventually, it will be almost impossible to distinguish halo stars from Sagittarius stars. Astronomers have traced the stars from this dwarf galaxy completely encircling the disk of the Milky Way, as shown in the following visualization.

In this video, we see a 3D visualization of the location of stars that are used to trace out the Sagittarius dwarf galaxy. The stars are seen to completely wrap around the Milky Way.
Credit: University of Virginia

As mentioned above, the mass ratio between the two galaxies influences the interaction. In this case, the massive galaxy is not affected very much, even though the satellite galaxies may be completely destroyed in this process. In recent years, we have found examples of the debris from these types of galactic cannibalism events (e.g., the stars that were pulled out of the dwarf galaxy during the disruption) around more distant galaxies. By coincidence, in the same image as the Tadpole major merger (and visible in the image tour), Hubble appears to have caught evidence of the ongoing disruption of a dwarf galaxy by a massive spiral galaxy. 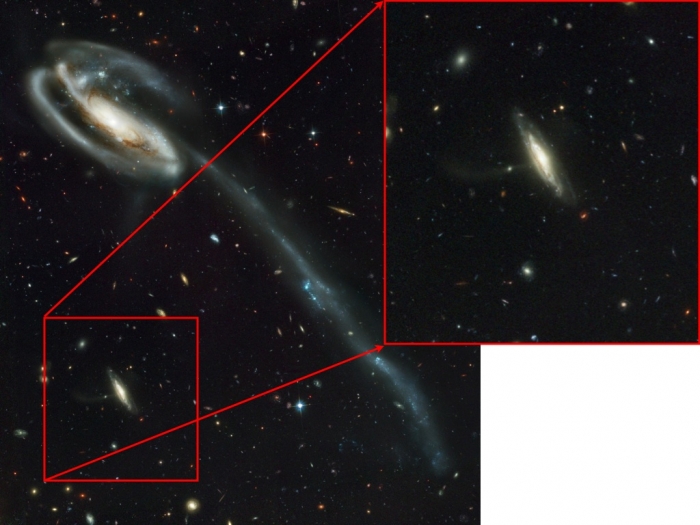 I have also been involved in the search for, and discovery of, the ongoing galactic cannibalism of dwarf galaxies by their parent spiral galaxies. There are two other excellent examples of this process published by me and my colleagues:

There is another environment where Galactic Cannibalism takes place, and that is the center of galaxy clusters. Most galaxy clusters have giant ellipticals, which we call cD galaxies, in their cores (for example, remember M87 in Virgo). Look at the following image of the cD galaxy in the core of cluster Abell 3827.

Inside the boundaries of this giant elliptical are what appear to be six distinct clumps. These are presumably the remnants of six massive galaxies (probably the size of the Milky Way) that are being cannibalized by the cD galaxy. If you look, there are at least four others near this galaxy that look like they may be next. It appears that the origin of the cD galaxies inside of galaxy clusters is a direct result of Galactic Cannibalism. These objects probably started out as normal ellipticals, but again, the process of dynamical friction caused the nearby galaxies to slow down as they pass the proto-cD galaxy and eventually spiral in and get consumed. As the cD galaxy grows more massive, the magnitude of the dynamical friction effect on nearby galaxies grows, allowing it to continue to consume more and more of the galaxies in the core of the cluster.

The relative velocity between galaxies plays a very important role in galaxy interactions. If two galaxies are moving too fast with respect to each other, the strength of the dynamical friction between them will not be large enough to slow them down and cause them to merge. The question is: Do these galaxies remain completely unchanged or do they experience some changes as they have a “near miss” collision? Inside of galaxy clusters, spiral galaxies should experience multiple weak encounters as they pass by many of the other galaxies in the cluster with large relative velocities. Although we do not expect each of these weak encounters to produce dramatic tidal tails, bursts of star formation, and eventual mergers, the galaxies are not unaffected. Each minor encounter is likely to alter the shape of the spiral galaxy and to strip off some of its outer, weakly bound stars. This process is called Galaxy Harassment, and the effect that it has on the galaxies is also known as “tidal truncation” because the galaxies should slowly shrink as they lose more and more stars.

Remember that clusters like the Virgo cluster are known to contain a much higher percentage of elliptical galaxies than we find in poor groups. We think that the reason for this is that the spiral galaxies are altered by processes inside the cluster. It is likely that some combination of major mergers in the outskirts of the cluster and galaxy harassment in the inner regions causes the spirals to become elliptical galaxies. The Galaxy Harassment model also predicts that there should be a population of stars floating around inside of the cluster, unattached to any particular galaxy. Recently, astronomers have identified both red giant stars and planetary nebulae in the Virgo Cluster that are not associated with any one galaxy. These “intracluster stars” appear to be those predicted by the models of Galaxy Harassment.

Although there are no nice images of this particular set of stars, you can read more about the project at Hubblesite: Discovery of Stars in Virgo Cluster.

‹ Where do Galaxies Live? up Galaxy Formation and Evolution ›
ASTRO 801: Planets, Stars, Galaxies, and the Universe