2.1 Available Solar Radiation and How It Is Measured

2.1 Available Solar Radiation and How It Is Measured

Before talking about concentration of light for practical purposes, it would be good for us to review what kinds of natural radiation are available to us and how that radiation is characterized and measured.

The fraction of the energy flux emitted by the sun and intercepted by the earth is characterized by the solar constant. The solar constant is defined as essentially the measure of the solar energy flux density perpendicular to the ray direction per unit are per unit time. It is most precisely measured by satellites outside the earth atmosphere. The solar constant is currently estimated at 1367 W/m2 [cited from Stine and Harrigan, 1986]. This number actually varies by 3% because the orbit of the earth is elliptical, and the distance from the sun varies over the course of the year. Some small variation of the solar constant is also possible due to changes in Sun's luminosity. This measured value includes all types of radiation, a substantial fraction of which is lost as the light passes through the atmosphere [IPS - Radio and Space Services].

As the solar radiation passes through the atmosphere, it gets absorbed, scattered, reflected, or transmitted. All these processes result in reduction of the energy flux density. Actually, the solar flux density is reduced by about 30% compared to extraterrestrial radiation flux on a sunny day and is reduced by as much as 90% on a cloudy day. The following main losses should be noted:

Only beam component of solar radiation can be effectively concentrated

Short-wave radiation, in the wavelength range from 0.3 to 3 μm, comes directly from the sun. It includes both beam and diffuse components.

The solar radiation reaching the earth is highly variable and depends on the state of the atmosphere at a specific locale. Two atmospheric processes can significantly affect the incident irradiation: scattering and absorption.

The amount of solar radiation on the earth surface can be instrumentally measured, and precise measurements are important for providing background solar data for solar energy conversion applications.

There are two important types of instruments to measure solar radiation:

Assuming that you have already learned about solar resource in your prerequisite courses, I suggest that you spend no more than two hours on reading for this topic.

Solar radiation data collected through the above-mentioned instrumental methods provide the basis for development of any solar projects. We can summarize the types of solar resource data as follows: 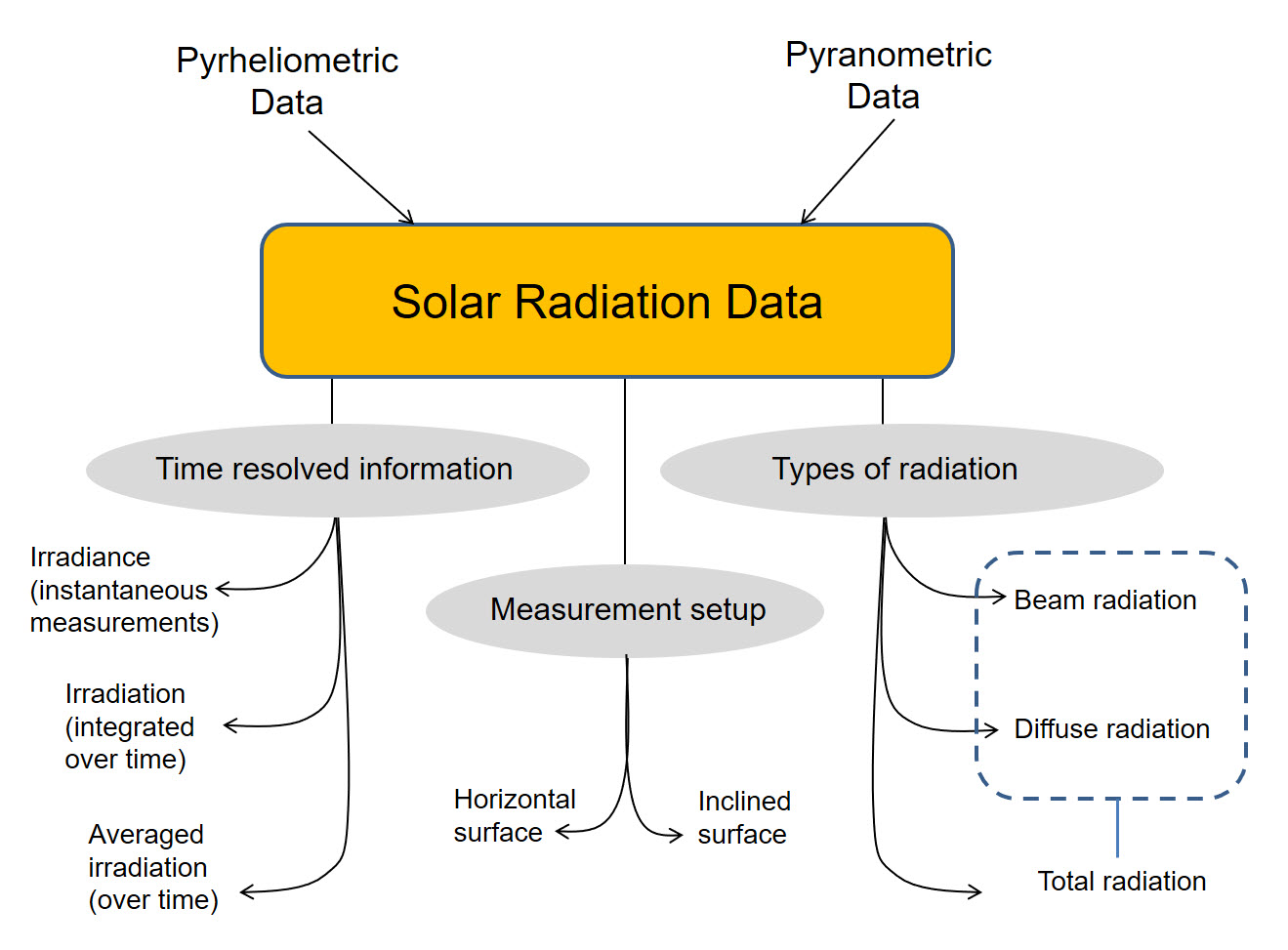 Before moving on, please work through the following questions to check your background:

Can you write down the value of the solar constant? What is its meaning?

How would you estimate the beam radiation intensity on the earth surface based on the solar constant and transmittance of the atmosphere of 0.5 at a certain location? Type in the number here: