Watch the following video that explains IPM adoption in grain crops in Australia; then answer this question:

1. Identify and explain three benefits of utilizing IPM discussed in the Australian video from the GRDC.

Click for a transcript of the Integrated Pest Management video.

Narrator: Now another aspect of the overall push for improved farming practices, is how we control pests; and Jane Drinkwater reports on the latest approach to pest control while looking after the environment.

Jane Drinkwater: Australia's crop production systems are forever improving. A prime example is how we manage insect pests. Where once broad-spectrum, often highly toxic, insecticides were used to blanket eradicate insects, there's a move towards a more holistic approach, and with good reason. Integrated pest management, or IPM, presents a win-win, less damage to the environment and to your hip pocket.

Jane: IPM uses multiple strategies to manage insect pests. One of the tactics is to let an army of the insects’ natural predators, or beneficials, fight the battle for you, and that means holding off on the use of broad-spectrum chemicals.

Rowan: I've probably learned that nature has its way of handling things its own way. You just have to give those beneficials that time. And when you understand that when you are using a broad-spectrum insecticide that you might control it straight away, but you'll get another flight straight in. But you've killed all your beneficials, and you've killed beneficials for other pests later on. And some of these beneficials don't have the lifecycle of an aphid. You know, their lifecycle might be only once or twice a year. And so you know, economically, if you look at the long-term, you're a long way worse off.

Jane: For insects without natural predators, or where the ratio of pests to beneficials is high enough to affect yield, strategies include the application of pesticides to problem areas only and the use of chemicals which target the problem pests, without damaging the beneficial insects. Rowan: We actually treat the seed for earwig infestation to give ita protection. But if there is a further problem, and that may well only be in certain areas of the paddock, which we tend to know where they will be, we will make up a brew of wheat, a little lawsben, and a little bit of vegetable oil. And we'll go out and spread just on that area. So as the earwigs are attracted to that bait, rather than all the other insects.

Jane: Peter Enkelmann’s been using IBM for more than a decade. While his beneficials successfully control silver leaf whitefly, there are still a few pests without natural predators.

Peter Enkelmann (“Riverview” Byee QLD): The chemistry that we use here, it takes out the beneficial insects. So the attitude is to delay spraying any product at all basically, apart from very few natural viruses, right through until the very last.

Jane: And using IPM means, when you do need to pull out the big guns, they're more likely to work.

Peter: One of the big advantages is that resistance to our traditional chemistry is just dropped dramatically.

Jane: But how do growers know when to take action? Well thanks to research funded by GRDC, entomologists have data on the density of pests in each crop that will lead to economic damage. Growers measure the number of pests in their fields and only take action once they've reached this threshold.

Hugh Brier (Senior Entomologist, Primary Industries and Fisheries, DEEDI QLD): So the short-term gain is you might avoid unnecessary sprays. Another short-term gain is by not spraying when you didn't need to, you might avoid flaring another pest which is more expensive to control, so that's another benefit. Longer term, if you avoid spraying unnecessarily, you build up beneficials in the whole system and the system is much more stable.

Jane: Fundamental to successful integrated pest management is the ability to correctly identify pests and beneficial species, and to regularly monitor both populations.

Hugh: In row crops, we use a bed sheet. So we'll go and we shake the plants from meter of row and that shakes all the insects out, or a lot of them out onto the bed sheet and you can count them.

David Shannon (GRDC Southern Region Panel Chairman): We have run a series of workshops, IPM workshops. We also work with the grower groups so that grower groups can scale up their grower members on the use of IPM.

Jane: And it's well worth getting up to speed.

Rowan: I find the system of IPM very easy because it's not an almost do nothing, but you just don't worry about it anywhere near as much.

Jane: With IBM's effectiveness in controlling insects, while reducing costs both financial and environmental, it's here to stay.

Rowan: IPM for us has cut down our chemical usage, insecticide usage a long way and you feel better for not using it.

If the video does not load for you, go to GCTV2: Integrated Pest Management

Part 2: Determining the Economic Threshold of Potato Leafhoppers in Alfalfa 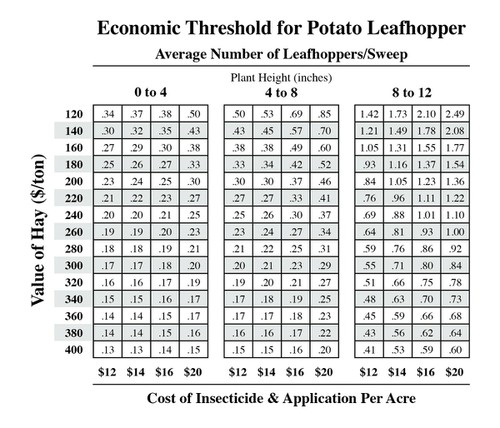 Assume that you followed the procedure described in the Penn State fact sheet to scout for Potato Leafhoppers in an alfalfa field by sweeping 20 times with your sweepnet in each of 5 different locations in the alfalfa field. The number of leafhoppers that you found in the 5 different locations was: 15, 12, 16, 7, 13 when the alfalfa crop was about 11 inches tall. You would like the alfalfa to grow about 25-30 inches height before harvesting it for hay, this could require 2 to 3 more weeks of growth, depending on rainfall. Based on current alfalfa hay prices in your region, you estimate your alfalfa hay is worth about $250/Ton, and the insecticide you would spray to control the leafhoppers would cost about $16/A. If you spray the alfalfa field, it cannot be harvest until 7 days after spraying the insecticide; and due to toxicity to bees, the alfalfa should not be sprayed if it is flowering.