Herbicide-resistant (or tolerant) crops, such as glyphosate-resistant crops are transgenic crops that are resistant to the herbicide glyphosate. Glyphosate is a broad-spectrum herbicide that controls a wide range of plants and breaks down relatively quickly in the environment; it was first marketed under the trade name: Round-up. Round-up Ready soybeans were released in the US in 1996, and since then, additional glyphosate-resistant crops (corn, cotton, canola, sugarbeet, and alfalfa) have been developed and widely adopted in the US and other countries (Fernandez-Cornejo J. and S. J. Wechsler, 2015; Benbrook, 2014; Duke and Powles, 2009). See Figure 8.2.15 on the Transgenic Crops for Pest Control page: Adoption of genetically engineered crops. 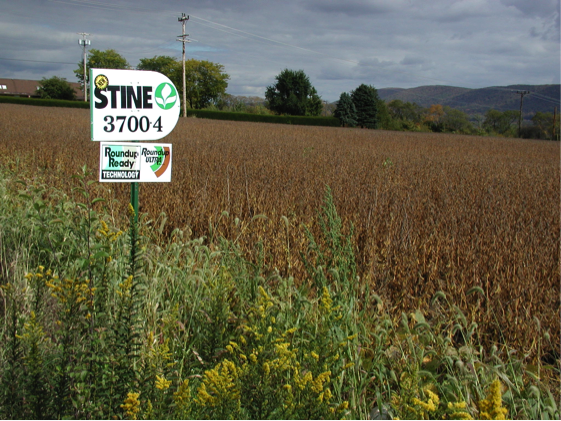 Herbicide-resistant (HR) crops such as glyphosate-resistant crops have facilitated the increased adoption of no-till or direct seeding of some HR crops because tillage is not needed for weed control. Once a crop has emerged, the risk of glyphosate herbicide damage to the HR crop is eliminated, making it easier for farmers to plant crops and control weeds without tillage. However, although Bt crops reduced insecticide use, the glyphosate herbicide must be applied to glyphosate-resistant crops to control weeds. Since they were first introduced in 1996, glyphosate use has increased. See the Figure 8.2.20 from the USGS Pesticide National Synthesis project below.

In addition, in contrast to Bt crops, the EPA did not require farmers to employ a glyphosate resistance management plan or refuge, and the number of weeds that are resistant to glyphosate has increased. Weeds have evolved resistance to glyphosate particularly in cases where farmers consistently applied glyphosate to manage weeds in HR crops and terminated cover crops and/or perennials with glyphosate prior to planting an HR crop. See the Figure 8.2.21 from the International Survey of Herbicide Resistant Weeds illustrating the increase in glyphosate-resistant weeds below. 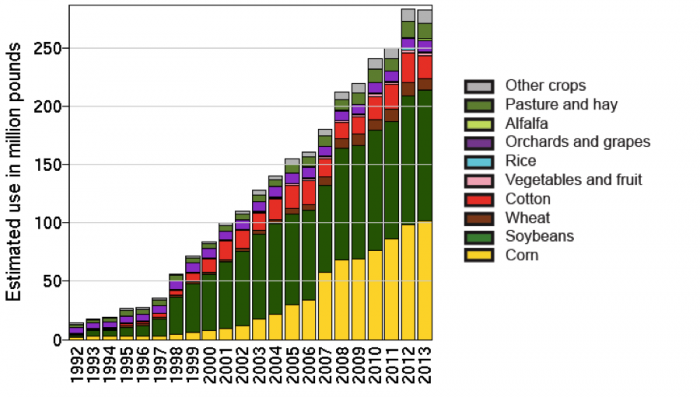 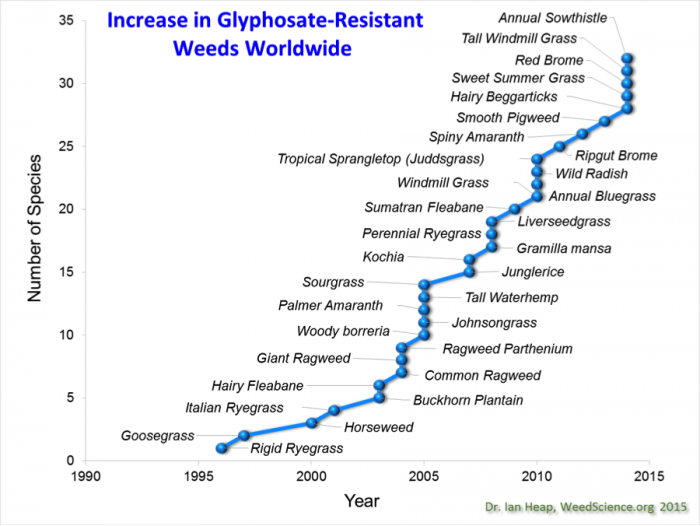 When the number of glyphosate-resistant weeds increased and became difficult to control, the agricultural-input industry developed transgenic herbicide-resistance crops that are resistant to additional herbicides. Dow AgroSciences developed a transgenic trait for resistance to 2,4-D, an herbicide that controls broadleaf weeds (dicot plants) and the company stacked or added the trait to soybean and cotton crops that also have resistance to glyphosate. And Monsanto produced a transgenic trait for resistance to an herbicide called dicamba that they stacked (or added to) soybeans that have glyphosate resistance. Dicamba and 2,4-D herbicides are volatile, and there is a risk that when the herbicides are sprayed, they will drift into neighboring fields and field edges, potentially damaging other crops and other plants. Wild plants in field edges and natural ecosystems often provide habitat for beneficial organisms, such as pollinators, pest predators, and wildlife. In 2017, Monsanto's crops with stacked dicamba and glyphosate resistance were available for use in some midwestern and southern states, where glyphosate-resistant weeds were particularly problematic. In 2017, there were so many reports and complaints from farmers about crop damage due to dicamba drift, that the states of Arkansas and Missouri banned dicamba spraying for some of the growing season. The EPA also investigated the complaints, and in autumn 2017, the EPA announced that the companies had agreed to new steps to reduce the risk dicamba drift with dicamba-resistant crops. For more information, see the EPA Registration of Dicamba for Used on Genetically Engineered Crops.

We will explore concerns about the stacked, herbicide-resistant technologies and tactics to manage glyphosate-resistant weeds more in the Summative Assessment.