Energy supply is the single largest source of carbon emissions. As such, it demands special attention in efforts to reduce emissions. The primary fossil fuel energy sources are from the burning of coal and the burning of natural gas (methane), both of which release CO2 into the atmosphere. Petroleum is primarily used for transport—a sector we will discuss in more detail later. Renewable sources of energy, including nuclear energy, biomass burning, hydroelectric, wind, solar, and hydrothermal combine for less than a fraction of either coal or natural gas. 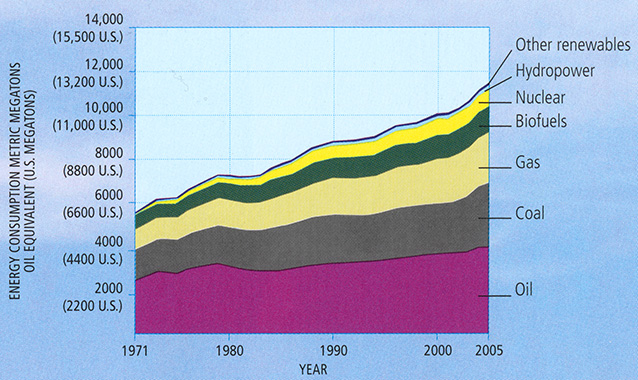 Here at Penn State, we have historically gotten much of our power on campus from campus-based coal-fired power plants, but there was a recent move to switch over to natural gas as a primary energy source on campus, a move that was completed in March 2016 (see "Switch to Natural Gas" Article and "One Year Later" Article).  Penn State is also making an investment in renewables, like this solar project.

Burning of natural gas emits less carbon than does a similar amount of energy derived from burning of coal, and has thus been favored by some policy advocates as a preferable energy source. On the other hand, coal-burning represents large point source carbon emissions, and thus has the advantage that CCS technology, when it progresses beyond the experimental stage, can be used. Both coal and natural gas extraction are associated with potentially serious environmental externalities. Controversial mountain top removal practices are increasingly being used to get at hard-to-reach coal deposits, but this process can cause extreme environmental degradation over very large areas. Natural gas has its own problems, in particular, damage done to the environment by the controversial practice of hydraulic fracturing or "fracking", which may release harmful chemicals into groundwater and the greater environment. This, and other potentially harmful practices associated with natural gas extraction, has generated quite a bit of debate regarding the development of Pennsylvania's Marcellus Shale. Penn State is now home to the Marcellus Center for Outreach and Research, which focuses on both the potential benefits and potential harm associated with developing Pennsylvania's Marcellus shale.

When we look at the regions of the world where per capita energy consumption is greatest, we find, not surprisingly, that much of the current energy consumption is by the developed world, especially the U.S. and Canada, and to a lesser extent Australia, the former Soviet Union, and Japan. However, from the point of view of controlling future emissions, it is important to note that certain developing nations like China and India, are making an increasingly large dent in world energy consumption, and given their very large populations, they are projected to make an even bigger dent in the future. Up until the last few years, China, was now building a new coal-fired power plant every few days! Even today, China continues to subsidize coal-fired power in developing economies despite a push toward lower emissions in their own country.  Any efforts aimed at controlling future energy-related emissions clearly need to take into account the developing world, including China, India, and South America. 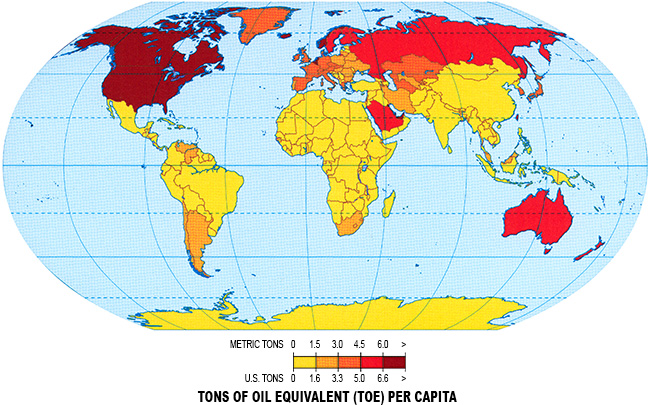