Transportation, as we have seen, accounts for 13% of fossil fuel emissions. Historically, the vast majority of these emissions have come from the road (cars, trucks, SUVs, motorbikes, etc.), and much of the recent growth is related to freight trucks, but emissions from air and sea transport are increasing (much of it is also related to freight transport), and emissions from airlines are projected to become increasingly significant in the decades ahead. 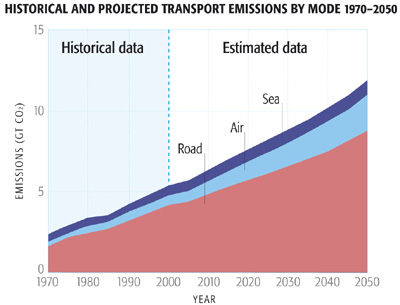 As with the energy sector, transport-related emissions from the developing world, especially China, but also South America and the former Soviet Union, are projected to become increasingly important as these nations develop their transportation infrastructure and adopt driving patterns similar to the developed world. 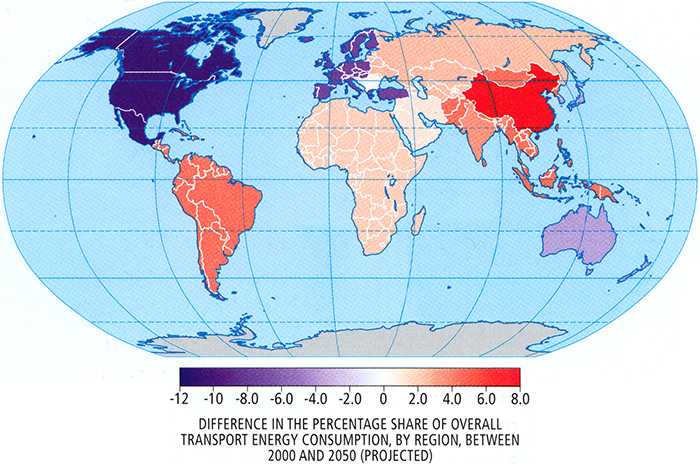 There has been quite a bit of discussion about the prospects for so-called Peak Oil taking hold in the decades ahead, as conventional oil reserves begin to run dry. Such predictions are based on the idea of Hubbert's Peak, which uses a simple theoretically-derived expression for the time evolution of production from individual wells, combined with estimates of the declining rate at which new wells/reserves are discovered over time, to project global petroleum production over time. One often encounters the argument that the peak oil phenomenon will serve as a solution to the carbon emissions problem. This argument is flawed, however. While it is true that conventional petroleum reserves could begin to run dry in the years ahead, there are other unconventional reserves in the form of tar sand and oil shale, which could provide a century or more of additional petroleum supplies—of course, such reserves may be considerably more costly to recover. Thus, it is ultimately going to be a matter of economics—as discussed earlier in this lesson—as to whether or not petroleum-based energy will be able to compete with alternative technologies (hydrogen cells, electric vehicles, bio-fuels) for transportation. 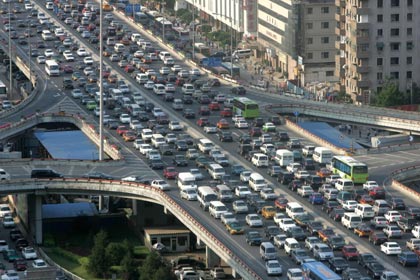