The domestic United States oil and natural gas industry uses a very specific set of measures and units that were common at the dawn of the industry and, at least in the U.S., have been retained and expanded upon over the years. These units are often called Oilfield Units. In the international oil and gas industry, the metric system or the related S.I. (Systeme Internationale) system are used. In this course, we will use the U.S. domestic, oilfield units.

The standard measure of volume in the U.S. oil and gas industry is the Barrel (bbl) for liquids and the cubic foot (ft3) for gases. The barrel is defined as 42 U.S. gallons. That is:

You have probably noticed that the unit for barrel, “bbl,” has two “b’s”, while the word for barrel only has one. One story relating the origin of the unit “bbl” and the measure of 42 U.S. gallons follows[2]:

In the early 1860s, when oil production began, there was no standard container for oil, so oil and petroleum products were stored and transported in barrels of all different shapes and sizes (beer barrels, fish barrels, molasses barrels, turpentine barrels, etc.). By the early 1870s, the 42-gallon barrel had been adopted as the standard for oil trade. This was 2 gallons per barrel more than the 40-gallon standard used by many other industries at the time. The extra 2 gallons was to allow for evaporation and leaking during transport [sic] (most barrels were made of wood). Standard Oil began manufacturing 42 gallon barrels that were blue to be used for transporting petroleum. The use of a blue barrel, abbreviated "bbl," guaranteed a buyer that this was a 42-gallon barrel.

In August of 1866, independent American oil producers met in Titusville, PA and agreed that the 42 gallon barrel would be the industry standard in the U.S.A. [3] 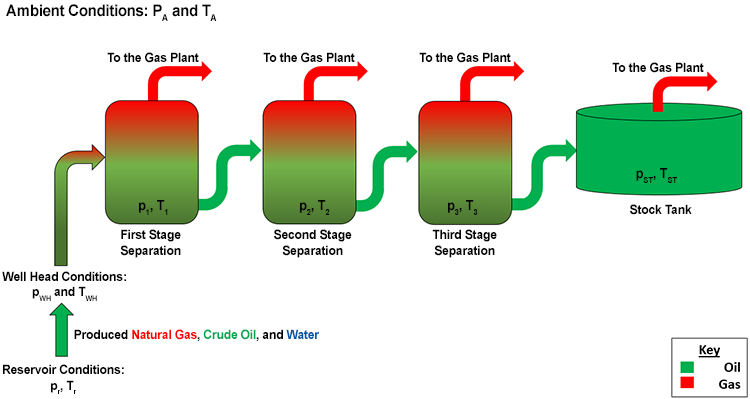 For gases, we use Standard Conditions, pSC and TSC, as the reference conditions for volumetric reservoir engineering calculations. Standard conditions are defined by different governments, scientific agencies, industries, or in some instances, specific legal contracts. The Society of Petroleum Engineers (SPE) defines these conditions as pSC = 14.696 psi (101.325 kPa) and 59°F (15°C). Informally, many engineers use pSC = 14.7 psi and 60°F. The appropriate set of standard conditions to be used in engineering calculations will often be dictated by the company and the location where the engineer works. When referring to the gas volumes at standard conditions, we use the units of Standard Cubic Foot (SCF).

For volumetric rate calculations, the U.S. oil and gas industry uses the symbol “q” for the volume of oil or gas produced (or transported) over a 24-hour period. Thus, we have:

[2] Source: Seeking Alphaα - Where Does That 2nd 'B' in the Abbreviation for Crude Barrels (BBL) Come From?